I watched an anime a couple years ago on Netflix where the MC had a ring of light on his chest or maybe it was on his head? This ring of light when exposed revealed monsters or demons that were nearby.

He turns into a hero (?) maybe, it's a suit of armor but I'm pretty sure he transforms into a robot or something.

I remember one part of the anime where his girlfriend turns out to be one of the monsters planted by the main protagonist to spy on him and when she transforms she's crying or just in distress and yelling at him to not look at her.

I saw Ultraman pop up on Netflix and that sort of looked like it but that wasn't it.

story-identification anime
Share
Improve this question
edited May 27 '20 at 6:21

This sounds a lot like one of the three OVAs based on the manga Bio-Booster Armor Guyver, but it’s been a long time since I’ve seen the 1989 series and I haven’t seen the other two.

The Guyver armour is a bio-tech suit of alien origin that appears when called by its host.

The “ring of light on his chest” could be the sphere that is actually in his head - which I believe is a weapon and is called the Control Medal.

He also has a powerful cannon that is exposed by him opening his chest, so you could be mixing up memories here. 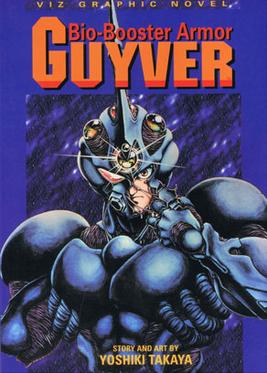 I vaguely recall the “girlfriend being a monster” twist, but the Wikipedia page is thin on specific plot details.

7
Anime movie involving people exploding into monsters?
7
Anime where the guy has gems on his arm that indicates his power level?
5
Anime where people defeat a demon boss and the main character receives the demon's power
9
Anime where the first episode is about a 10 years old homeless boy
2
Light novel where people have abilities and magic and can level up to defeat monsters invading the world
5
Anime where people summon monsters using gun-like devices that carve patterns in the air
3
Anime about two girls who have compact mirror-like things with little Tamagotchi-like creatures, and transform into cute outfits to battle monsters