How much of the shrunken/giant Ant-Man is Paul Rudd?

Various times throughout his MCU tenure, the character of Ant-Man, played by Paul Rudd, shrinks and grows. He goes through various trials and tribulations while at those sizes, such as riding ants, spinning around on a record, and grabbing War Machine out of the sky. How much of these movements are portrayed by Paul Rudd? Is he on a greenscreen, miming the movements? Is it just facial capture for his reactions, or is he actually shot doing what he does in the films?

A mixture of green screen, motion capture and outright CGI.

As you can see from this making-of featurette, although Marvel weren't averse to using physical effects, basically every scene in which Ant-Man does anything while wearing his suit, he's set against a blue screen, with mo-cap dots on either the suit or an entire mo-cap suit. 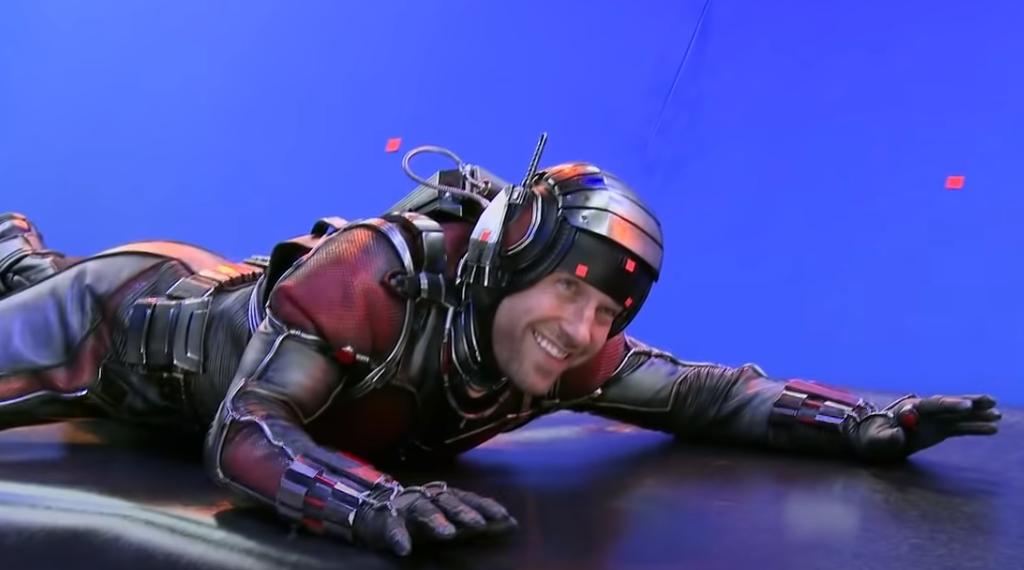 Rudd did the close-up work, but most every scene where you can't see his face (and all of the wire-work scenes) seems to have been his stunt double, Colin 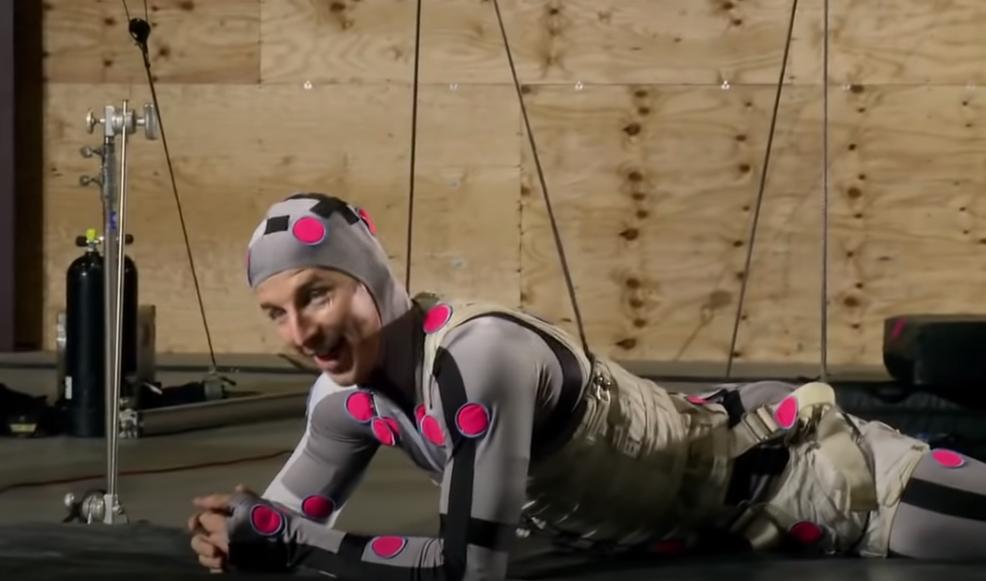 And sometimes they just use CGI to recreate the character virtually, then have Rudd do some fill-in 'reaction shots' near to the camera. 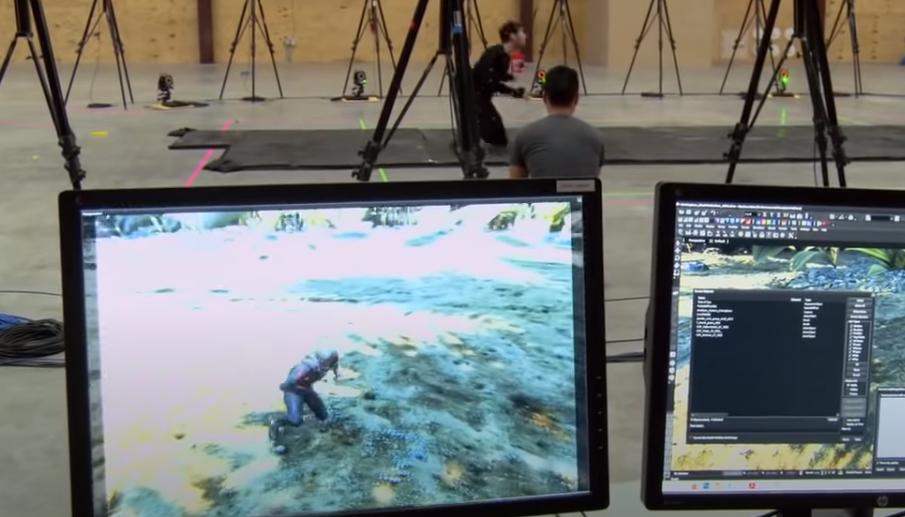 Whilst there is of course some CGI affects being used parts of the shots are done using forced perspective, oversized props and other visual affects. In the backpack scene in Ant-Man and the Wasp, for example, there is an oversized backpack used and some different sized stairs.

“For the backpack, we had two different sizes,” says Ceretti in the official Marvel video, above. “We had the real size which is a normal backpack for a kid. And we had a version of the backpack that was double the size that had been made by the props people. He takes the backpack and gives it back to Evangeline, but they didn’t do it at the same time. He was carrying the big backpack and she was carrying the small backpack, and right in the middle, there’s a transition with a CG backpack.” 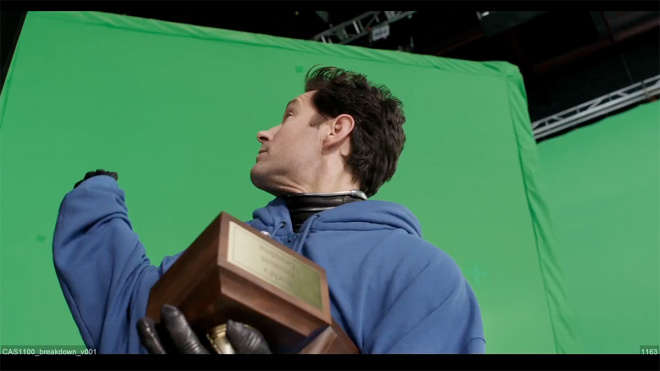 “They shot a plate of just the stairs without Paul Rudd in it in Atlanta, then repeated that move on a scaled up set with Scott running down some scaled up stairs,” says Hellen. We ended up replacing his legs with CG, just because things weren’t lining up perfectly, and that let us control things a bit better. We matched the two plates together, and had to build some terrain and some grass. And we also put Wasp in there.” 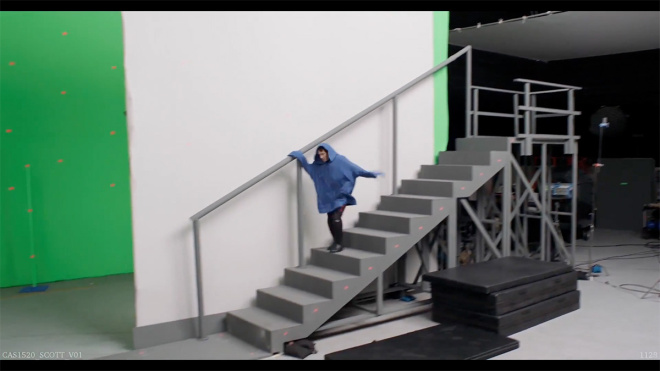 vfxblog, Going old-school: forced perspective and other effects in Ant-Man and the Wasp

The same affects are applied in all the scenes as far as I can tell. A mix of green screen affects and CGI blended together to create a realistic as possible look.

The same affects go for the objects used in the films that shrink and grow, a lot of props, green screening and of course a lot of CGI. This video from Rodeo FX, Ant-Man and the Wasp shows a quick overview of how things were done.

Giant-Man in Captain America: Civil War was 100% CGI according to Russell Earl.

"The airport is a hundred percent digital," ILM visual effects supervisor Russell Earl tells me over the phone. "Spider-Man, Giant-Man, and Black Panther are always one-hundred percent CG. Iron Man, War Machine, and then we’ve got Vision." The exceptions were characters like Black Widow, Captain America, or Winter Soldier — basically, the few people not wearing a mask of some sort. But while directors Joe and Anthony Russo did shoot at an airport in Germany, only a handful of principal cast members were there — with the majority of the live-action footage shot against a giant green screen in Atlanta, Georgia and assembled by the visual effects team later.

Despite that, and the ever-increasing amount of digital effects that go by, unnoticed, in everything from comedies to TV shows, Earl stresses that there is still incredible value in shooting real actors, on real sets, even if that imagery never makes it into a finished film. "It forces decisions. You build the set, you can photograph the set, and you know the look and feel of it. That is why we went and photographed the airport and shot a bunch of reference. Something real to base it off of is huge." The same goes for performances. Even though the 50-foot high Giant-Man was totally digital, it was the footage of Paul Rudd playing the scene — Earl describes it as "kind of like a big, drunk baby" — that provided the direction for the animators to follow.

Not the answer you're looking for? Browse other questions tagged marvel marvel-cinematic-universe ant-man-2015 ant-man-and-the-wasp or ask your own question.