Can the Soul Stone be acquired by 'sacrificing' Wade Wilson?

As we all know, the acquisition of the Soul Stone requires a sacrifice. Is it by any way possible to acquire it by 'sacrificing' dear old Deadpool? 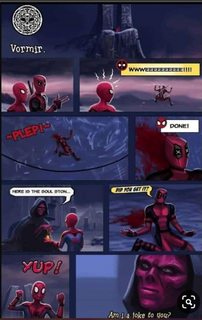 Q: Can you get the soul your sacrificed for the Soul Stone back when you return it?

A: No, the process is irreversible. Even if you have returned it to its original location, you wouldn't be able to get the person back. In fact, it's not really returning the stone, more like put it back properly. The tribute soul for the soul stone will forever be sealed in that place, therefore Black Widow is gone forever.

There's no character in the MCU with powers quite like Deadpool's. Sure some have regenerative abilities but none have them to the same level as Wade. The closest we have is probably the Hulk. For a close situation we have Smart Hulk's reverse Snap in Avengers: Endgame and the permanent damage to his arm because of it.

“He’s lost an arm,” Russo says. “He lost Natasha. That’s not coming back. He’s damaged himself. I don’t know. It’s interesting. That’s permanent damage, the same way that it was permanent damage with Thanos. It’s irreversible damage. His arm, if you noticed, is a lot skinnier. It’s blackened. So, he loses a lot of strength there.”

Russo does acknowledge that “permanent” means something different a world of magic and super science, but that’s not his concern any longer.

“But who knows? There’s a lot of smart people left,” he says. “Maybe someone helps him repair that. Maybe someone gives him a new arm. I have no idea where that character goes from here. The nice thing is we didn’t have to pay attention to where it goes after this, we just try to tell a satisfying ending.”

Lastly, of course Wade Wilson, aka Deadpool, currently resides in the X-Men Cinematic Universe and not the Marvel Cinematic Universe. As we haven't seen Deadpool in the MCU yet we can't answer the question as to whether a Soul Stone sacrifice would work for him but we can say that currently the answer is no, yes, neither or both as he does not yet exist in the MCU; it's a real Schrödinger's Deadpool situation.

I doubt it. First, obviously the question of whether it can be acquired by sacrificing Wade Wilson is about as answerable as asking whether sacrificing Edward Cullen would suffice. Neither of them exists in the Marvel Cinematic Universe.

However, the closely related question of whether someone with powers like Deadpool would work is answerable. Deadpool regenerates from what would otherwise be fatal injuries. There are many characters in the MCU with similar powers, although these traits are frequently overshadowed by their other abilities. However, most obviously, Asgardians (like Thor) and the Hulk can both regenerate from seemingly lethal injuries.1 Possibly Captain Marvel as well. We also should not forget S.H.I.E.L.D.'s Project T.A.H.I.T.I., which can resurrect even a dead human being, if applied quickly enough.

So the Avengers literally have people who can regenerate from fatal injuries among their numbers, not to mention (if they can access S.H.I.E.L.D's secret files) knowledge of a means of reviving a recently-dead human. If they had thought there was the slightest possibility that any of these people with regenerative abilities could acquire the Soul Stone without requiring an actual death, I imagine that they would have tried that first.

Therefore, I suspect there simply was not any means of cheating the system. No death, no Soul Stone.

1: Hulk: Banner says that he shot himself with a bullet, and that the Hulk spat it out. In addition, Banner jumps hundreds of feet onto the rainbow bridge, bouncing about three feet in the air, before lying unmoving. Then he transforms into the Hulk, with all injuries completely healed. Finally, he is bitten by Fenrir, whose fang penetrates his leg, but immediately afterward, no wound is visible. Thor: As an Asgardian, Thor has regenerative powers. In *Agents of S.H.I.E.L.D., an Asgardian berserker demonstrated the ability to survive a fatal injury, and Thor is much more powerful. His eye did not grow back, but seeing as it was put out by the Goddess of Death I think we can cut him some slack.

10
In Endgame, why didn't the Hulk's arm regenerate?
9
Is this Avengers: Endgame character's fate really irreversible?