This girl with short brown hair and brown eyes wakes up. It’s her first day of school (high school, I forgot what grade she was in. Also I believe that her old middle school was called Jon Jin Middle School? Or I don’t know if that is the name of the high school), when she wakes up to put in her uniform she gets confused. She gets confused because the uniform was something out of a manga story.

She asks her mom if this was the correct uniform and her mom says that yes it is the correct uniform. So she gets confused but puts on the uniform and when she heads out, she’s sees across from her apartment with a girl who was gorgeous with the same uniform (I don’t remember what happened when she saw her. Later on she finds out that that was her childhood best friend and still is)

She starts walking to her high school only to figure out that her high school she was going to attend didn’t exist, so she got confused. She then went to find a map and started looking for her school. And when she was walking a car stopped and two guys came out a kid with I believe blonde or orange hair and another guy with white hair. And the driver says that if she can show them the way to school.

Once the driver left she asked the two guys if they know where her school was and the kid with blonde/orange hair responded with that there was not school with that name. And then when she gets to the school with the uniform she was wearing she asks if she attends that school and she does.

What Ashley describe is in chapter 1. Her role seem to be female lead(FL) friend, a.k.a a mob character. In this new world, she befriend with the female protagonist and her capture target. The plot start at middle school and then got a time skip to highschool.

“I just want to live a normal life, why is this happening to me!” Your average student Ham Dan, whose hobby was reading “Law of Insomnia” wakes up to a beautiful novel like heroine. But even in the world of fantasy novels, her role is no different. Stuck as the childhood friend of the heroine, her normal everyday life comes to an end, becoming more twisted by her strong character. 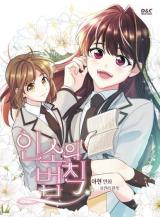 It is about Ham Dan get transport to parallel world after a sleep. Her parent is still the same, except it was added novel element(irealistic power like jumping from 3rd floor, character don't exist in real world,...) there. She had a special day where if she sleep, the world will return back to normal but the other world still exist . The FL and other forget about her existance and only remember once she got back to their world.

Not the answer you're looking for? Browse other questions tagged story-identification comics manga webcomics or ask your own question.

4
Manga about a girl being able to see through animals' eyes and control them, who solves a crime
4
Manga with a girl who bonds with gods to fight other gods. She has long blonde hair and a gold helmet
3
Manga: girl goes through a door leading to a prince, stacked books, and her appearance changes to a female version of the prince
26
Looking for comic about female superhero who loses her powers
7
Can anyone remember a short TV series or movie from the 80s/90s about an alien girl who becomes popular on her first day in highschool
6
What is this book about a girl who discovers she is a battle robot?