Science fiction novel that had an albino space crew

Seeking a book or story about an albino space crew that adopted, or kidnapped children. The book is from the late 70s or early 80s. The ship’s crew were albino due to radiation from space travel.

Raiders from the Rings, by Alan E. Nourse. I first read it in the early 1980s, when I checked it out from the "juvenile fiction" section of a public library, but ISFDB says it was first published in 1962. This scan looks like the same book jacket artwork that I remember from when I first read it, and from when I refreshed my memory of it somewhere around the late 1990s (again from a library copy). Perhaps it will ring a bell for you? 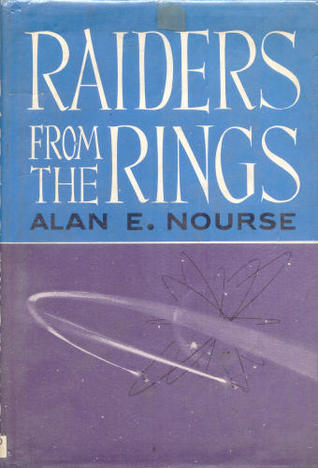 The basic premise is much as you described. The main viewpoint character is Ben Trefon, eighteen years old, and a proud member of the culture called "the Spacers" that raids Earth at regular intervals for the things they need to keep their civilization alive and independent. Their trust in the ethics and charity of the government or governments down on Earth hovers in the neighborhood of absolute zero, so there's no question of trying to negotiate a truce and throw themselves on the mercy of whoever runs things on the ancestral homeworld of humanity. (The Spacers are basically everyone who lives anywhere else in the Solar System.) The people of Earth, of course, reciprocate with an equally negative view of the Spacers. According to an online review I've just been looking at to refresh my memory of the major plot points, the primary necessities which the Spacers perpetually need to collect from Earth in those daring guerrilla raids are food and women.

The Spacers have been an independent civilization for generations as we readers come in, so I'm not sure why they have not yet found a way to become truly self-sufficient in food production -- perhaps by building huge greenhouses on Mars? -- and I don't have a copy of the book handy to let me check on what excuse was given. But the "we need women!" part is explained by Nourse's premise that the most important effect of long-term exposure to the background radiation outside Earth's protective atmosphere is that when women get pregnant and give birth, the resulting children are always white-haired baby boys. Other than the premature white hair, however, they tend to be strong and healthy and generally "normal." (Or, if there are severe birth defects occasionally, Nourse doesn't tell us what happens to those cases -- he was writing this for a juvenile audience and didn't want to get too messy, I suppose. By the same token, perhaps female embryos are sometimes conceived, but are never successfully carried to term, and it is considered bad manners to talk about it? But that's just the older-and-wiser me speculating about things I didn't worry about when I was a kid reading an adventure story.)

So as Nourse has set it up, the only way for Spacer men to find mates and produce children to keep their culture alive is to abduct fertile young women from Earth in guerrilla raids; a task which is evidently made easier by the fact that the Spacers seem to be better at building small, fast ships which can usually evade anything Earth has readily available to defend its turf. Also, of course, the raiders can pick any given place (such as a school campus with lots of female students) on the surface of the Earth as their next target, so it's impossible for Earth's military to set up meaningful ambushes down on the ground in advance of a raid, since they never know which town the next one will hit.

Early in the book, Ben participates in his first raid and carries a captive girl back to his personal ship. By "personal," I mean he was the only one who flew in it all the way from Mars to Earth, and his plan is that only he and the girl will be occupying it during the trip back home. (His father lives on Mars.) This plan goes awry when it turns out that the girl's brother was nearby, saw the raid happening, and got into the ship first, meaning to ambush Ben and free his sister. That doesn't quite work out, and these young people spend a long time getting to know each other while the ship is making the long trip home.

This gives Nourse the perfect excuse to have the characters lecture one another about their respective cultures' opinions of each other, and of the historical events which led to so much bad blood between the two branches of humanity, with Ben explaining such things as what I just said about the lack of natural-born baby girls in Spacer society. The version which his two prisoners had heard from government propaganda was that those raiders from space are evil, disgusting mutants whose natural-born children always look monstrous, or something along those lines. Naturally, Ben feels that "white-haired" is not the same thing as "monstrous."

Ben also asserts that no woman is forced to marry any particular man against her will. She isn't allowed to go back to Earth, but otherwise she has some civil rights. Lots of lonely Spacer men would be eager to marry her. She can wait until she meets the fellow she actually wants to marry before she starts having children. This is how it worked with his own mother, a few decades ago. (And presumably his father's mother, and so forth.)

The plot goes on from there, now that Nourse has set up the basic premise of how things have worked for generations before Ben's first raid. As you might guess, it turns out that having all those girls abducted at regular intervals has made the people of Earth very angry indeed, and now they feel they have finally built a sufficiently strong space fleet to let them seize the initiative and attack the known population centers of Spacer culture. (The review I linked to gives some further details.) But what I've described from the earlier chapters of the novel ought to be enough to demonstrate that this is the same story you were remembering. I just checked, and it turns out that Amazon has a Kindle edition available -- which you can read for free if you're part of their Kindle Unlimited program -- so you can easily check it out for yourself.

There were a couple of stories that Richard Lupoff published in the mid-70s, "After the Dreamtime" and "Sail the Tide of Mourning" that might be what you're looking for. He incorporated them into his novel Space War Blues which came out in 1978. I seem to remember that the sailors were Maori, and that the nature of star travel bleached their skin.