Legend has it that there's a pirate treasure buried on the beach just outside of town. Unfortunately, the coastline has shifted in the centuries since it was buried, and now, whenever someone tries to dig it up, the tide comes in before they reach the treasure and washes away their work. So, the protagonists get the idea to use their time machine* to go back to a time when it was possible to reach the treasure, and dig it up then.

But, they don't quite think their plan through all the way. They just go back to the day the treasure was buried... you know, the one day that the original pirates are guaranteed to still be around. Pirates that are not too happy that some random strangers in weird clothes are hanging around where they just finished burying their treasure.

There are two things that I specifically remember:

One is that some of the time travelers are tied to a tree and left to die of thirst, while the rest are taken to be sold as slaves. It takes over a day for the slaves-to-be to come up with a reason for the pirates to go back (I can't remember what that reason was).

The second is that the pirate captain found their time machine, and accidentally activated it. The time-travelers talk about the time machine like it's a stick-shift vehicle; since it's in neutral, it's not going to go anywherewhen, so its main monitor should still be showing the beach. They convince the rest of the pirates to let them write a magic spell on a spare piece of sail to bring back their captain. The "spell" is actually instructions on how to work the time machine, and since the captain is the only literate person among the pirates, he can read and follow the instructions.

*This is the part that has me convinced that the book is part of a series. There's absolutely no explanation of why the protagonists have a flipping time machine; they just do. It's almost as if the author expected the reader to already know about it.

This is the short story, "A Pirate Took Our Time Machine," by Kieth Monroe, published in Boys' Life magazine in September 1989. It was the last of a long series of adventures by the Boy Scouts of the Polaris patrol. They were a frequently appearing story figure in the magazine from 1959–1976; then, after a long hiatus, three more stories were published in 1988–1989.

What I remember distinctly about the story is after the pirate captain shuts himself in the time machine (leaving in in "neutral," still on the beach but noncorporeal), the other pirates are rather concerned that nobody except this missing captain knows how to navigate. He's the only one who can "read or write or figger," as one of the other pirates puts it. That quandary is the reason why the boys are able to get the ship's crew to cooperate with the idea of showing the captain instructions for how to rematerialize the time machine. 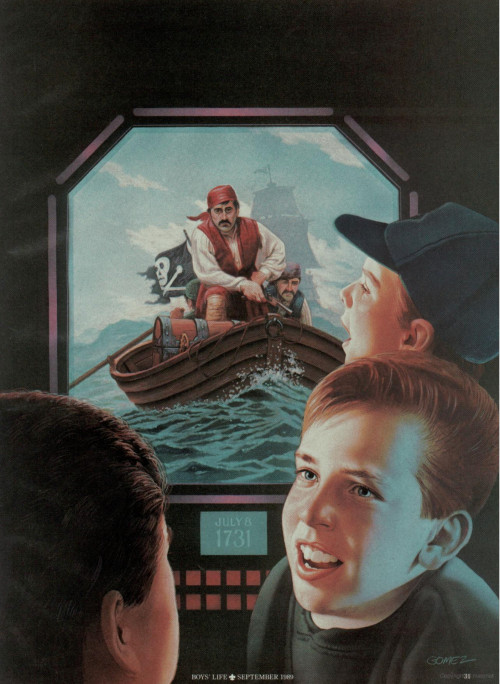 You've basically described the entire plot. The time machine goes into "neutral" when the door closes, so it's still present on the hill where it landed, just incorporeal and the door is locked until the lever is pressed. They paint a sign on a sail telling the pirate to press the lever to open the door.

I found it searching pirates "time machine" treasure beach on google books. The entire story should be visible at this result

Although a different book has already been accepted, Magic Tree House's Pirates Past Noon is from 1994 and is also similar, in that it's part of a series, in case someone else is trying to find that.

The Not so Jolly Roger from Time Warp Trio was also published in 1993, is a time-traveling series, and has a similar plotline of being confronted by pirates with buried treasure.

Not the answer you're looking for? Browse other questions tagged story-identification time-travel pirates or ask your own question.

11
Looking for '70s era Time Traveling Young Adult Novel
11
Time travelers meet prehistoric ancestors and discover they are being taught or herded or are the children of aliens
9
Science fiction novel about a man who travels through time and falls in love with a warrior woman
5
Time traveling family visits end of the universe
11
Book with time travel and aliens using collars to mind control
8
TV series about alchemist from the Middle Ages traveling 500 years into the future to find a powerful, ancient machine