I read a short story where astronauts became infected with something that made them barf up their insides and regrow them, like sea cucumbers. In the end, this is how one of the characters learns that his wife cheated on him; she slept with someone who had been infected, became infected herself, and yakked her guts up when her husband surprised her. I think this was on the old Sci Fi Channel website, but google and archive.org were no help. I googled "sci-fi story sea cucumber," but didn't get what I was looking for.

Pretty sure it's not Mindbridge, either.

This is The Girl had Guts by Theodore Sturgeon. 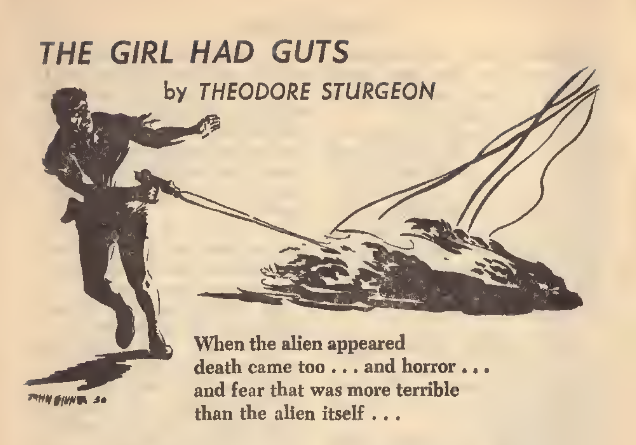 And at last we could discard the fifty or sixty theories that had been formed and decide on one: That the primates of Mullygantz II had the ability, like a terran sea cucumber, of ejecting their internal organs when frightened, and of growing a new set,....

The only problem that remained was to find out exactly how terrans had become infected...

Read it at the Internet Archive here, in the Venture SF January 1957 issue.

10
Sci-Fi story about supersonic blimp
22
Short story about astronauts fertilizing soil with their own bodies
13
Story where aliens are like giant tarantula hawks, implanting eggs into human hosts