I have a sneaking suspicion this is a Fear Street book, but I'm having no luck pinning it down from the lists online. The protagonist is a teenage girl, who starts seeing a ghost in her bedroom. Nothing terribly saucy happens, but she gets to talking to him, and eventually starts being interested in him romantically. I want to say he's dressed like a stereotypical greaser, although that might be influenced by the book art, which I remember as showing the two of them in her bedroom with him being slightly transparent. He can't remember who he is, or how he died. I don't remember if there were any visible wounds on his spirit body that might have clued her in. Eventually, through some set of circumstances, she runs into him outside of her bedroom, except he's alive, and doesn't recognize her, leading to a climax where she realizes that somehow his ghost traveled back in time yet, and he hasn't died yet. He gets into a fight, and a knife gets drawn. I don't remember if she manages to intervene before he gets stabbed, and whether he survives.

I believe I read this somewhere in Kentucky in the mid 1990s in a paperback book, maybe 150ish pages.

Found it with a search for "rl stine" girl falls in love with ghost. Haunted is indeed #7 in the Fear Street books. 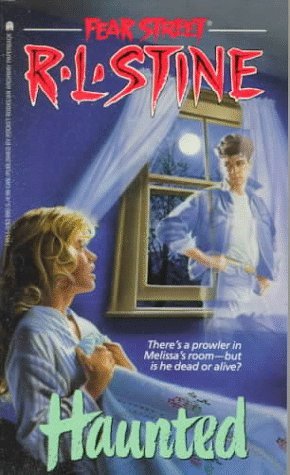 Melissa woke up screaming. The prowler was at her window…or was he? The recent headlines about a Fear Street prowler had everyone on edge. Her father now kept a loaded pistol in his bedroom. That made it even more frightening—and real.

Then the haunting began: her new car driving as if someone else had taken control; her birthday presents ripped open by unseen hands; an invisible force trying to push her out the bedroom window.

Out of the shadows of her bedroom came a menacing figure. Who was he? Did he really come from beyond the grave? And why had he come to kill her? If Melissa doesn’t solve the mystery fast, these questions will haunt her—to death!

I misremembered parts of the plot. The ghost does not know who he is, but he is certain that Melissa killed him, and actively attacks her until she convinces him to help solve his death.

Not the answer you're looking for? Browse other questions tagged story-identification novel ghost or ask your own question.

5
Anime movie about a boy in a ghost town
6
YA Series about alive boy sent to ghost fantasy world by ghost to prevent him from being killed
7
Book with glowing green liquid that keeps injured teenage girl alive
7
Kindle book about a woman who helps remove ghosts from houses
10
Book where a boy and girl are transported into a fantasy video game
9
The rich playboy is dead, and he's a ghost, but his wife still loves him
9
Book about young girl meeting Odin, the Oracle, Loki and many more
4
Book about a pair of girls who help a ghostly girl in a locked room move on