Why does George Weasley have a toothbrush stuck in his ear?

In the Harry Potter and the Deathly Hallows - Part I, George walks in on Harry and Ginny kissing. The intriguing thing is that he has a toothbrush stuck in his ear.

If you look closely, as he enter the room he's using the toothbrush as intended, for cleaning his teeth. 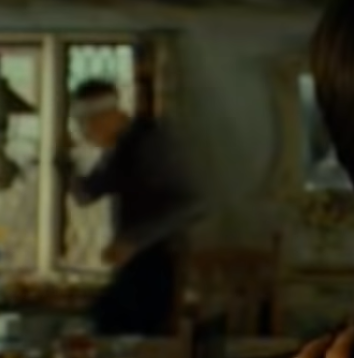 When he grabs his tea, he puts the pointy end of the toothbrush in his ear, presumably to avoid having to put the wet end down on an unclean surface while his hands are otherwise occupied.

The script describes it thusly, without offering commentary.

George wanders in brushing his teeth, pours himself a cup of tea and, sticking the toothbrush in his ear-hole, leans back against the stove for a sip. Ginny -- sensing something -- opens her eyes and JUMPS. Harry wheels. George winks, tips his cup in their direction.

33
Why did Harry Potter break the Elder Wand?
21
Could George's ear have been healed by Snape?
0
Why does the last Harry Potter movie have Muggle fighting?
71
Why weren't Fred and George Weasley Placed in Ravenclaw?
6
How did Harry know he could trust Narcissa Malfoy?
68
Is this a laptop in the Weasley's house?
4
Feasibility of using Dark Magic to do a Horcrux-ectomy