Anime about a girl with marks around her neck

I saw an AMV maybe a year ago.

In it there was a girl who had marks around her neck. The AMV had moments in which people were guillotined, and it appeared that the girl carried a curse with her, that wherever she'll go, she will bring death and chaos.

The AMV also showed some moments of revolution or something like that.

I wanted to know on which Anime was the AMV based?

P.S. I don't have any idea about the AMV, neither I know what was the title of it. I saw it on YouTube, is the only information I can give :)

Edit 1: In one of the scenes in AMV, the girl is shown wandering through streets (her clothes were torn and old). The anime appeared to be quite tragic.

This might be Hitsugi no Chaika. The titular character, Chaika Trabant, has a scar circling her neck. It's usually hidden beneath her clothing, but here it's visible: 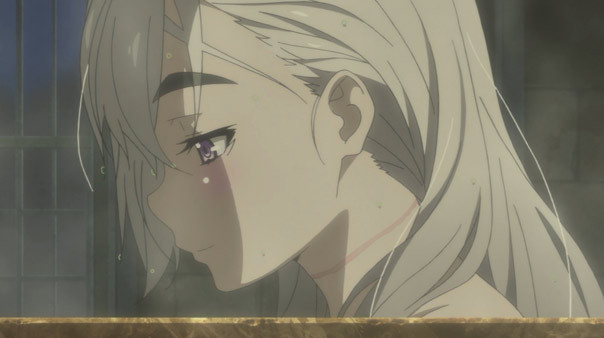 The series takes place five years after the overthrow of Arthur Gaz, a tyrannical emperor who wielded immense magical power. Chaika believes herself to be Gaz' daughter, who was also named Chaika, but who was executed by beheading (along with everyone else in Gaz' palace) during the revolution. I don't remember how much of this was depicted in the anime, but it could be the scenes of revolution and guillotining that you remember.

it appeared that the girl carried a curse with her, that wherever she'll go, she will bring death and chaos.

I don't think Chaika is ever referred to as carrying such a curse, but there certainly is a lot of death and chaos that goes on around her over the course of the series.

Do you mean Marie's backstory?

1
Cartoon/anime where a girl turns to stone and the boy has a "hoverboard" and travels around with her body
6
Anime girl dies while dude tries saving her
6
Possible anime from MTV circa 2000-2002 about a cop who carried a special bullet around his neck
26
Need help remembering a magic anime with a young girl and her pet
7
Anime short about two girls shooting each other with guns from their mouths
5
Anime with a suicidal girl who can see people's "death marks". Meets two reapers
6
Anime where a girl tries to heal a boy with extensions from her body