Where is Damian Wayne in the Batman Beyond timeline?

Technically speaking, the whole Batman Beyond franchise was officially DC canon a full decade before Damian Wayne came into existence. Due to the sliding timeline of the comics, it's difficult to put down a year to Damian's birth, but he would naturally be an adult, presumably in his late 40s or 50s, by the time Terry starts his Dark Knight training. Not since his introduction, though, have I heard him mentioned properly in the Batman Beyond books.

Given the nature of comic book ret-cons, this presents a problem, though: if Damian was alive, he should have been the "ideal candidate" for mind transfer in the episode below. This is especially true, given that Ra's (in Talia's body) specifically said the early transfer method needed a "genetic relation" to be accomplished:

All that being shown, central questions are:

1. Does Damian Wayne exist in the Batman Beyond timeline, or is it an alternate timeline?

2. Was his existence ever officially addressed by DC comics?

3. If so, what happened to him to explain why he's not around to be Batman's heir?

Before we answer there is an important distinction to be made between the main DC Universe and the DC Animated Universe.

Batman Beyond the TV show is a canon element of the DC Animated Universe, and was made in the 2000's before Damian Wayne was ever a character. The show would never have been able to address his existence, and none of the tie-in comics to the DCAU ever did as well.

Batman Beyond as a franchise however does go beyond the DCAU into the DC Universe and there has been material which did confirm and address the existence of Damian.

So where was Damian in the DC Universe Batman Beyond?

In the post-DC Rebirth series Batman Beyond, it was confirmed that after Bruce retired, Damian temporarily became Batman and went to fight his grandfather. 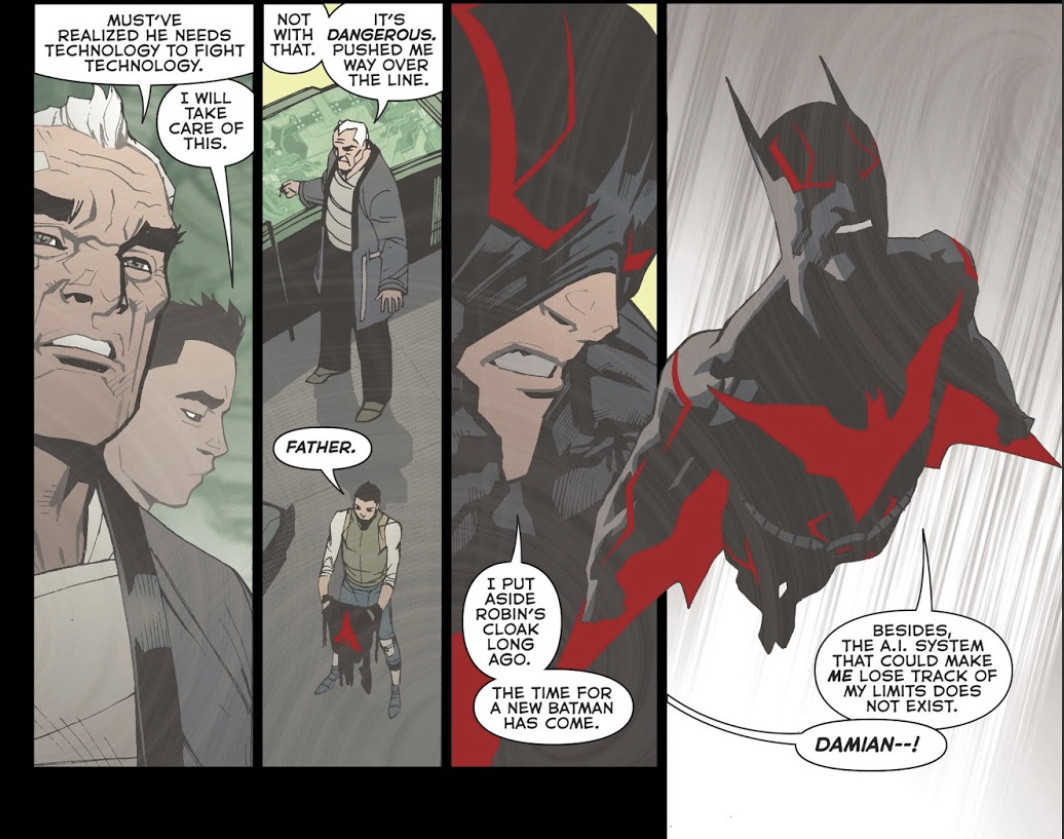 Damian gets in a bit over his head though and Bruce is lead to believe during the confrontation that he is killed. 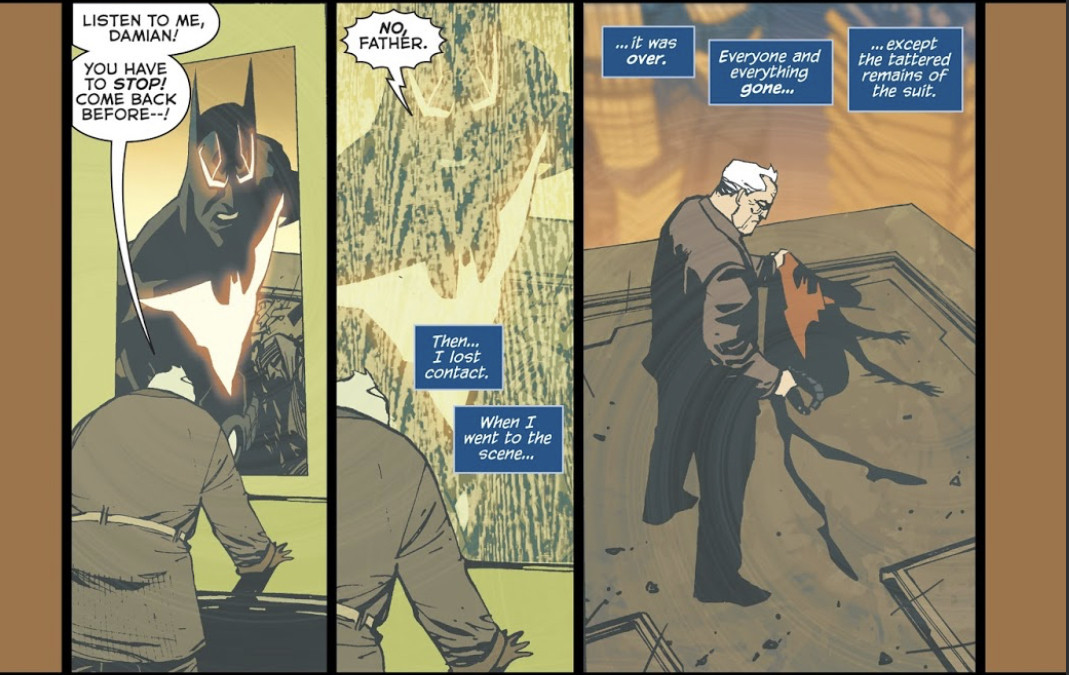 Damian didnt die during this though, instead, during this time he essentially turns into his grandfather's successor, running the League of Shadows, and abandons the Batman persona. This because of Ra's concerns that Bruce's invention Brother Eye would ultimately lead to the end of humanity as seen in the series Future's End. 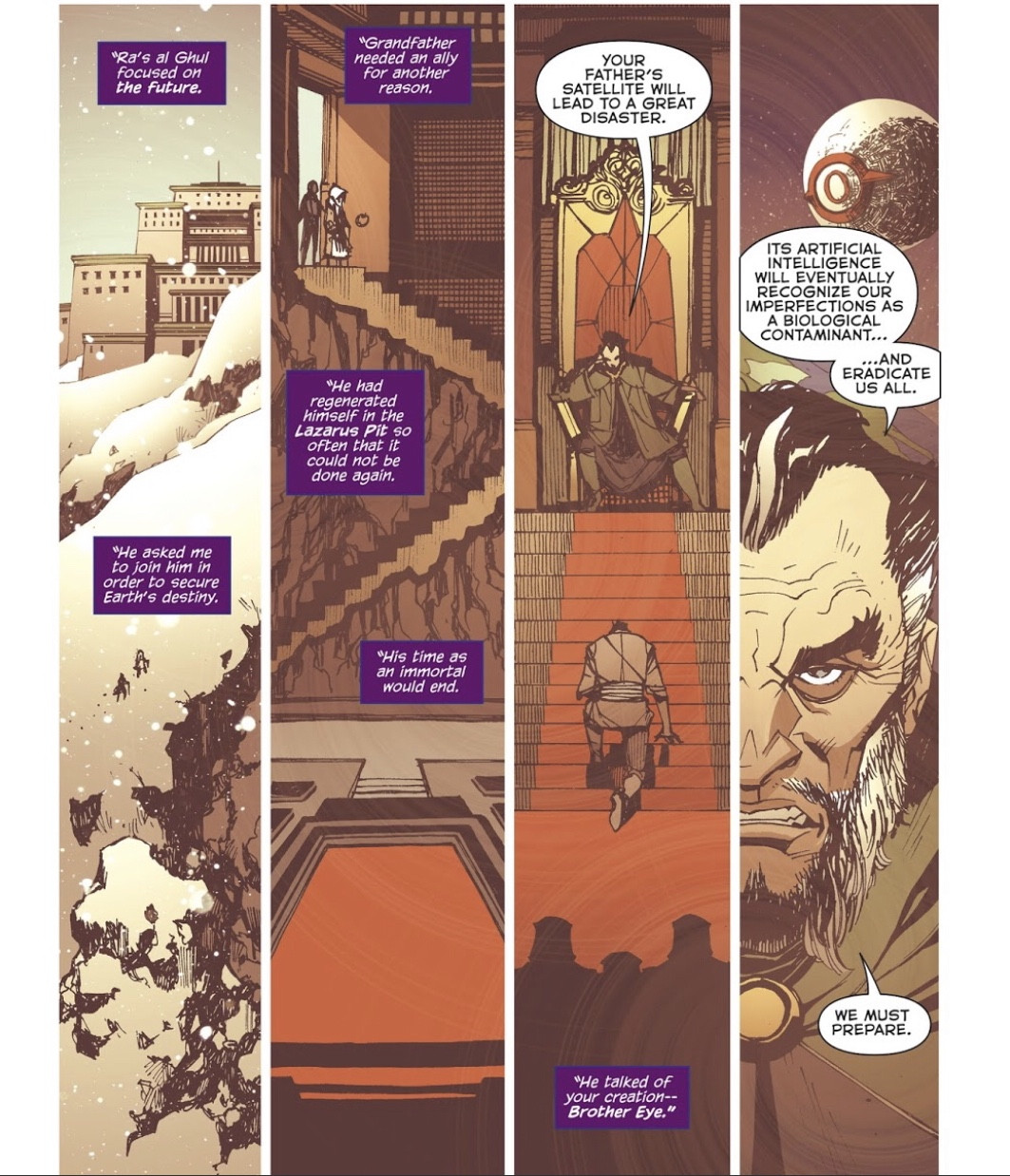 This can all be seen in the second story arc of the 2016 Batman Beyond comic.

Not the answer you're looking for? Browse other questions tagged dc batman-beyond or ask your own question.

3
What is included for canon for the new Batman Beyond Unlimited comics?
3
Is Batman: Arkham City set before or after the birth of Damian Wayne?
32
How many people have deduced Batman's secret identity?
2
Are the Batman Beyond 2.0 comics part of the DCAU?
16
Did Batman ever develop a Super Soldier Serum?
12
Is Alfred the moral conscience of Bruce Wayne/Batman?
4
Does Damian Wayne ever see his mother again after 'Son of Batman'?
2
How old was Bruce Wayne in Batman Beyond?
16
Is Batman Beyond the Farthest Future DC Timeline Established?