In Asterix and The Magic Carpet, why does Cacofonix's singing start producing rain?

In Asterix and the Magic Carpet, Cacofonix's singing produces rain. (Previously, this had never happened.)

(This effect also continues in the next book Asterix and the Secret Weapon.)

Four of the five current answers simply quote from Wikipedia's (unsourced) assertion that there is a French saying that when one sings poorly, it rains.

This could very well be an explanation. But absent either in-universe (i.e. within the comic books, perhaps cleared up in later books) or out-of-universe (e.g. interviews with Uderzo) evidence, this is just speculation. Moreover, it is unsatisfying because it fails to address my above question (in bold).

This is an ongoing joke that Cacofonix's singing is so bad, it causes negative things to happen (a common trope). 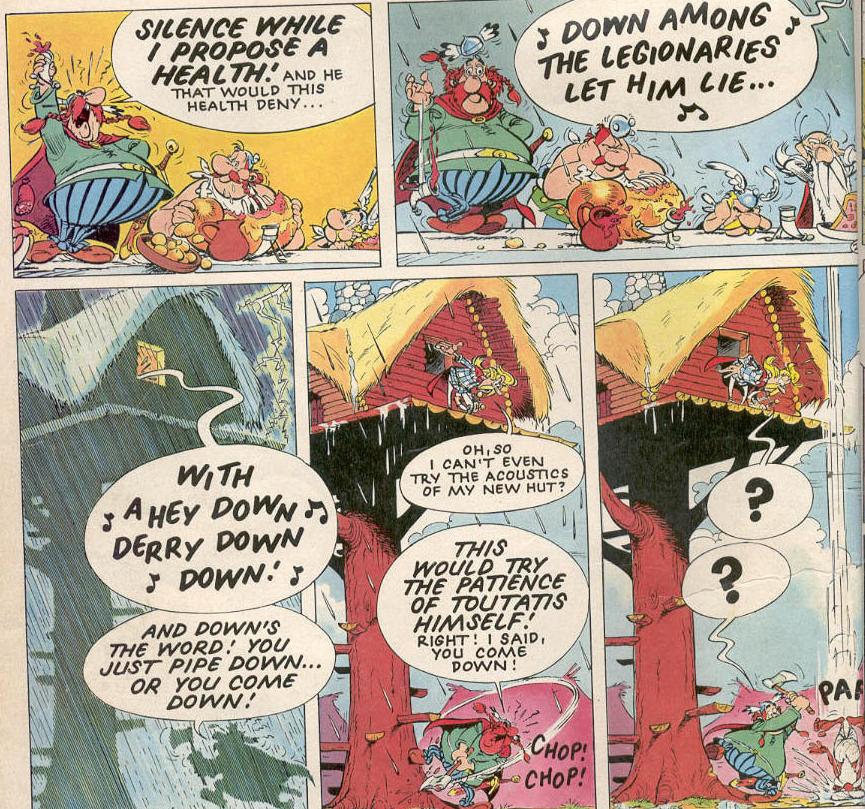 According to Wikipedia (My emphasis):

In Asterix and the Normans [his singing] is so unbearable that it teaches the fearless Normans the meaning of fear. In later albums his music is so spectacularly horrible that it actually starts thunderstorms (even indoors), because of an old French saying that bad singing causes rain.

The joke even leads to him causing it to rain inside:

And sometimes even leads to Cacofonix saving the day: 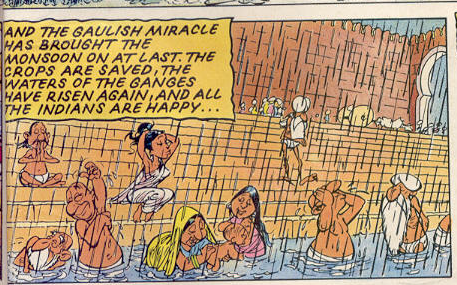 According to the Wikipedia section on Cacofonix:

In later albums his music is so spectacularly horrible that it actually starts thunderstorms (even indoors), because of an old French saying that bad singing causes rain.

A French person reading the comics would automatically get the reference, and thus it isn't stated.

On page 6 of Asterix and the Magic Carpet (in-panel numbering), Vitalstatistix says regarding Cacofonix’ rainmaking abilities:

Oh, yes … I was forgetting, Cacofonix has new string to his lyre these days.

As noted by Darren, this is probably a pun involving adding a string to one’s bow, which analogously works with avoir plus d’une corde à son arc in the French original.

Either way, the new rainmaking effects of Cacofonix’ music are addressed on the page: Either it’s because he actually upgraded (or rather: downgraded) his instrument or his abilities.

In France we have this saying that if you sing badly it will produce rain. More precisely if you sing out of key, or pitchy, then you'll make it rain. "Cacophonix" means "cacophonie" which is French for "cacophony": harsh discordant mixture of sounds. Thus triggering the rain.

As many have pointed out, it could be because of the French connection and the French proverb that bad singing may cause rain.

Another possibility could be interpreted from the fact that Watziznehm requests the Gauls to help him with draught in his region in the Ganges region. In the Ganges region, although the timeline doesn't match, back in the days, there exists a myth that a singer "Tansen", residing in a Mughal emperor's court, was capable of causing rain and thunderstorms merely by his singing. It might be a small chance that the writers slipped a reference to Tansen but I wouldn't put it past them to have thought of this too!

Perhaps not immediately clear for English readers, the original French name of the bard in the cartoons is Assurancetourix, a contraction of the French term Assurance tous risques, literally "all-risk insurance".

An all-risk insurance includes coverage that automatically covers any risk, including natural disasters. It's not unreasonable to assume that in the development of the character the new writers (Goscinni, the original story writer died in 1977) some of the "all-risk" natural disasters are being incorporated.

20
In the Asterix series, Why didn't the Romans just address the magic potion problem head on?
10
Does 'The Twelve Tasks of Asterix' take place in the same universe as the rest of the Asterix books?