Book with gender-disguised male magician, forbidden language, one character can talk to horses

Looking for a book we read back in the early 2000s (2003?) which had a male magician who disguised himself as a woman and was travelling on a quest with two other women, who were unaware of his real gender. Other remembered details follow:

Thanks in advance for any hints and help.

Sounds like The Innkeeper's Song (1993) by Peter S. Beagle, mainly by dint of one of the characters being magically disguised as a woman. There is also a stableboy in the story.

Here is the logline: "Three powerful women (each with her own secret past), a stable boy, a weaver's son, and an innkeeper set in motion a series of events that brings each of them face to face with the forces of magic and the workings of fate." 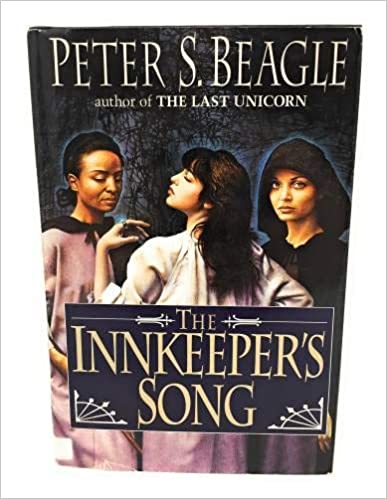 7
Falsely accused witch befriends transforming dragon she was to be sacrificed to
11
Fantasy novel with amnesiac witch, impotent soldier and cursed animals
5
Story ID: Time travel story where people swept into the past attract attention by altering a naval battle using tech like a naval ram
7
Book about a dragon and a necromancer, set in past China/Asia
9
Hindi TV series with angry ghost developing affection for single mother and her kids