How did McGonagall know that Harry had an owl?

In CoS, McGonagall tells Harry that he should've sent a professor a letter through Hedwig when Harry and Ron couldn't get through the barrier.

"Why didn't you send us a letter by owl? I believe you have an owl?"

This information proves that McGonagall knows about Harry's owl. But how? I can't see how McGonagall could've had any interaction with Hedwig...

Harry is regularly seen with his owl in the main hall at breakfast time. It doesn't bring him post (typically), but it appears often enough that any teachers who eat their breakfast with the students would have seen him with it.

Just then, the post arrived. Harry had got used to this by now, but it had given him a bit of a shock on the first morning, when about a hundred owls had suddenly streamed into the Great Hall during breakfast, circling the tables until they saw their owners and dropping letters and packages on to their laps.

Hedwig hadn’t brought Harry anything so far. She sometimes flew in to nibble his ear and have a bit of toast before going off to sleep in the owlery with the other school owls. This morning, however, she fluttered down between the marmalade and the sugar bowl and dropped a note on to Harry’s plate. Harry tore it open at once.

Prof. McGonagall does seem to regularly eat her breakfast at the same time that the owls usually arrive.

At breakfast on Thursday she bored them all stupid with flying tips she’d got out of a library book called Quidditch through the Ages. Neville was hanging on to her every word, desperate for anything that might help him hang on to his broomstick later, but everybody else was very pleased when Hermione’s lecture was interrupted by the arrival of the post.

Harry and Ron jumped to their feet. They were half hoping for a reason to fight Malfoy, but Professor McGonagall, who could spot trouble quicker than any teacher in the school, was there in a flash.

On top of that, he's Dumbledore's pet sacrificial lamb, the likely target of murderers and one of her house's students. Any one of those would be a good reason for her to make a special effort to learn about his doings.

There's also the fact that a certain someone posted him a very expensive broomstick in book 1... 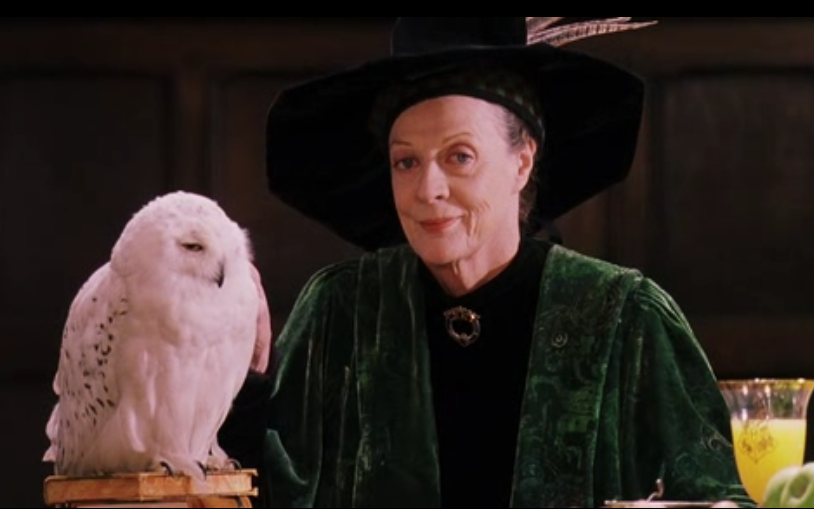 Students may bring an owl OR a cat OR a toad.

As Harry’s head of house, McGonnagal would be responsible for making sure he wasn’t in violation of that policy. So presumably she keeps track of of her students’ pets so if Harry shows up with a cat one day she can tell him off. There may even be a registration process. “I believe you have an owl,” from her may be as about as unusual as my landlord mentioning “you have a dog, right?”: I already informed him of that.

Not the answer you're looking for? Browse other questions tagged harry-potter minerva-mcgonagall or ask your own question.

41
Why didn't the Ministry use owls to find Sirius?
24
Why didn't Harry Potter anonymously give money to Ron, at least for important stuff like a non-broken wand?
28
How did Fudge know that the Dementor tried to kiss Harry?
10
Why didn't Ron and Harry ask Professor McGonagall for help instead of Lockhart to enter the Chamber of Secrets?
27
Did Dumbledore and McGonagall cheat so the Gryffindors would win the House and Quidditch Cups?
43
How does Professor McGonagall know about the Golden Trio's conversation?
9
How did Perkins find out that the time of Harry's trial had changed?
5
How long does it take Hedwig to bring a letter to Ron or Hermione?
1
In Harry Potter and the Philospher's (Sorcerer's) Stone, why didn't they send Hedwig to Dumbledore instead of going after Snape (Quirrell)?
25
When are Hogwarts book lists sent out?