2000s novel with a journalist trying to stop a Bill Gates character from taking over the world, said plot somehow involving the Dead Sea Scrolls

I was reminded of this when I saw the title of SciFi / fantasy book from 80s about Jesus, present-day New York, time travel and the Dead Sea scrolls, but somewhere in the early 2000s, while I was working as a bank teller in Ashland, KY, one of my co-workers gave me a book they read, thinking I'd enjoy it as a religious programmer. It was in English and probably about 200 pages, paperback binding, but bigger than the usual paperback which fits in a cargo shorts pocket. It being almost two decades ago, my recall of it is slightly muddled, but the main character is, I think, a journalist.

Weirdly enough, I don't remember why he actually got involved in the plot, but I remember the main villain, who was clearly supposed to be a No Celebrities Were Harmed (TV Tropes term) version of Bill Gates, but with all of the names changed to avoid suggestions of libel. Said villain ran an OS company in Washington or Oregon that ran much of the world's computers. Publicly, his image was good, but there were a lot of odd stories of him randomly firing people, or employees dying mysteriously, and fragments of story from his perspective show that he's haunted by the death of a parent, I think his mother, and that some of the fired/disappeared employees had caught him in the midst of some sort of psychotic break, apologizing to no one about what he had done to his mother, or maybe had text files full of him typing that over and over again.

His plot involved a software patch that would let him take over much of the world's computers, maybe ushering in an apocalypse of some sort through either making the world's support systems crash or launching missiles. It's all a bit vague in my head, but I believe the villain was trying to destroy the world in expiation of his guilt.

The climax of the story winds up in Israel, Jerusalem specifically, I think. I remember there was a character who'd shown up a few times, a rabbi in Jerusalem who stood roadside on Saturdays at a main thoroughfare with a sign proclaiming that there was to be no driving on Shabbat (I want to say he was based off of a real-life case) who gets mowed down by the villain in his van when he enters Jerusalem. Somehow, the solution to this computer plot is tied into the Dead Sea Scrolls, with the protagonists locating a heretofore missing scroll and that somehow foiling the plan.

The only other fragments I remember:

Ah, I found it! format C: by Edwin Black. I started reading the Wikipedia article for the Dead Sea Scrolls, hoping they had a "references in popular culture" section that might mention this, and the mention of the Copper Scroll sounded about right, and the book is referenced there. From the Goodreads blurb: 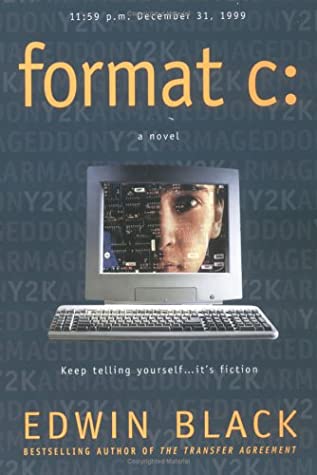 The richest man on earth, Ben Hinnom, owns the world's largest computer company, based in Seattle, which sells the Windgazer 99 operating system. Hinnom uses global fears of the Y2K problem to launch the ultimate domination of mankind. The only ones standing in his way are brash, yet guilt-ridden, Chicago investigative reporter Dan Levin, his computer-savvy girlfriend, Park, and her profoundly inward teenage son, Sal, a computer genius who becomes the nexus in the fight to save humanity.

Format C takes readers from the cutthroat competition of the computer world and big media in Chicago and Washington D.C., to Jerusalem's Old City where terrorists strike, to the caves of Qumran where the Dead Sea Scrolls and the mysterious Copper Scroll advance the intrigue, to the back alleyways of ancient Tsfat where Kabbalistic mysteries are unraveled, to the Valley of Death, the actual location of Biblical Hell in a cavern-filled valley outside Jerusalem's Old City known in ancient times for child immolation. It all culminates in the prophesied cataclysmic final battle between good and evil at midnight on December 31, 1999 at Har Megiddo in Israel, the site known as Armageddon.

I was wrong about the cover, which looks to be blueish grey with a computer monitor, and it's longer than I remember, over 400 pages. I found a copy on OpenLibrary, so I will reread it to figure out if this is a match other than the unusually advanced computer technology. And boy... I'd forgotten how worried people were about the Y2K bug.

This reminds me a lot of Quantum Lens by Douglas E. Richards. The cover was blue with gold lettering (though the image I can find on Amazon Kindle is a lightning-rimmed circle, representing the titular lens).

The general plot involves a man, a software billionaire, who finds a way to tap into the latent energy of the universe with his mind, giving him (over some time to practice and gain proficiency) the ability to fly, project energy (whether beams like lasers, or telekinetic force), reflexively protect himself from any form of force, and possibly other things I've forgotten.

There is a female in the story, a psychologist who is an expert on the placebo and nocebo effects, who is forced to aid another man, an enemy of the protagonist, into gaining the same powers.

Much of the action takes place in the Middle East, as that's where the antagonist has set up his base of operations.

Much of what's attributed to the bad guy above fits here, and a significant plot line was the psychologist trying to figure out whether helping the protagonist was key to the resolution, or simply handing him the world on a platter.

5
Fantasy TV series set on a pacific island?
6
SciFi / fantasy book from 80s about Jesus, present-day New York, time travel and the Dead Sea scrolls
3
YA/childrens book I read in the mid-late 90s, about videogames & crocodiles?
12
Fantasy novel involving a mall security officer who prevents a man from blowing up the mall with a dead man's switch
4
Anime/cartoon about two kids trying to depetrify all humans