Why were the elves of Lothlórien sundered from the rest?

When Haldir first meets Frodo and Legolas in Lothlórien, he says

... for we now dwell in the heart of the forest, and do not willingly have dealings with any other folk. Even our own kindred in the North are sundered from us...

From this it seems like there were groups of Elves who do not get along, though it is hard to believe. Is it just lack of communication due to dangerous times and long distances between the groups, or was there some sort of falling out between groups of elves?

They do seem friendly enough to Legolas and they seem to communicate with Elrond. In what sense does Haldir say 'sundered'?

Remember that the Elves of Lórien aren't really of the same folk as the Elves of Mirkwood. True, both are true Moriquendi, dark Elves that left the journey westwards towards Valinor, and thus never saw the Light of the Trees. But the Elves of Mirkwood are entirely Moriquendi, while the Elves of Lórien were joined at the end of the First Age by those that left sunken Beleriand, either Elves that have seen the Two Trees with their own eyes (like Galadriel and the Noldor she brought with her) or Elves from Beleriand, like Celeborn, who may not have seen the Trees themselves, but were enriched by seeing the Silmarils and the wonders brought back from Valinor.

So yes, from the Lórien elves' perspective, the elves of Mirkwood were a bit rustic, a bit backwards, maybe even a bit savage. It's no surprise that there were never very close relations between the two realms.

Haldir's comment has multiple meanings. One, as Avner touches on, is that the Elves of Mirkwood and those of Lórien have very different cultures and heritage. Those differences may not have caused them to try to keep in touch as much as they may have wished to. Even after the War of the Ring and the rehabilitation of Mirkwood, the two Elven kingdoms that resulted remained separate (from Appendix A):

Celeborn and Thranduil met in the midst of the forest; and they renamed Mirkwood Eryn Lasgalen, The Wood of Greenleaves. Thranduil took all the northern region as far as the mountains that rise in the forest for his realm; and Celeborn took the southern wood below the Narrows, and named it East Lórien; all the wide forest between was given to the Beornings and the Woodmen.

However he also meant literally - in between Lórien and Thranduil's kingdom lay Dol Guldur and southern Mirkwood, previously home to Sauron and now one or more Ringwraiths. Not to mention the significant armies, as Dol Guldur staged attacks on both Lórien and Mirkwood during the War of the Ring. There weren't many dealings between Lórien and Mirkwood because of the risk of attack by those forces and the evils of Mirkwood. 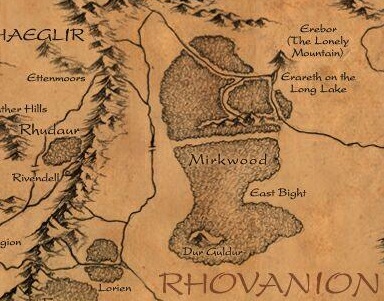 31
Is Legolas in The Hobbit Book?

53
Were there two elves named Glorfindel?
126
Why were the Elves so great at archery?
9
What does it mean that the elves were diminished?
6
Did Saruman rescue Gollum from the Wood-Elves?
17
How did Saruman's army reach Helm's Deep so quickly?
6
At Elrond's Council, why were the Elves so worried about being cut off from Grey Havens?
12
Why did Fellowship of the Ring stay in Lothlórien for so long?
10
Were Men aware that Aragorn was being raised amongst the Elves?