Reverse isekai manga where the MC is a Demon Boss (reincarnated?) as a boy on Earth

I can't remember the name of the manga, but I remember how far I got. I'm gonna combine at least a couple of chapters of the manga, to start of how it goes.

In the beginning, an army of people (mages, knight, etc.) delves into a dungeon in a search for the boss. it was later they find the demon boss. everybody attack (and I believe) the demon boss was almost defeated. before the hero could kill the demon boss, he pulls a final magic move that shows a bright light, and then someone looking up in the sky (i believe?) in an alleyway of a city in Japan.

The MC doesn't remember anything and walks out of the alleyway, where a drone looks into him, and the person behind the drone is surprised. later on, a couple of officers stops the MC, notice the slit throat, then question the MC. Before any strait answers came out, a high school looking female took the MC out of the officers and into a building. it was later revealed why MC has a slit throat, and how the building uses to be a torture/murder chamber for gang and mafias and such. Before the female had a chance to kill MC, he remembers who he is, where he is originally from, and whats going on. Gaining his memory back, the MC uses his powers to stop the female from killing him, killing her instead. By accident. Again, there is a drone, and this time, the person behind it was shocked.

Later on, MC realizes that he had killed the female unintentionally, not knowing how the logic of this world works. Remembering his abilities, he collects whatever leftover souls inside the building and tries to bring her back to life. It was later that the person in charge of her mission came to rescue her. (Don't remember clearly, but) Dude explains that he is going to bring her back, but she won't be the same. The story of the female killer comes up, explains why she became a murderer. The female wakes up, the boss (looks at/ feels her?) and was like "yup, no heartbeat." Basically female becomes second MC, a strong zombie of sort.

I'm gonna stop there for others to read this manga, as I think I said much, but if this is not enough, here are some things it has:

I think this may be Dead Mount Death Play as per this set of reviews: 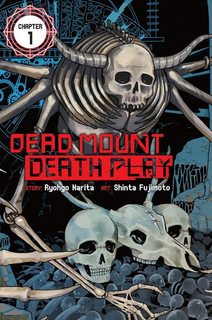 From the man who brought you Baccano! and Durarara!! comes a title that lacks exclamation marks but still has a cast of way too many characters. It's also got Narita's signature blend of straight-out fantasy and magic realism, and in this case, that really works to create an interesting story. Dead Mount Death Play is equally about exploring the assumptions people make about others as it is an action adventure, and that's what really works in this first volume – Polka, or rather, the being known as the Corpse God who reincarnated as Polka when that boy was murdered for reasons unknown, was sold by his parents because of his ability to see the dead. This resulted in a terrible, lonely life, but because he became undead over the course of his usage by armies, all of his attempts at being happy were deemed “evil” and “corrupting.” Thus the bad guy turns out to be not so bad after all, and arguably the hero who took him out (or at least tried to) is much more of a villain than Polka ever was.

That's not to say that Polka is spotless, whether that's now or in his past life in an alternate fantasy world. (Does that make this a sort of reverse isekai story?) He certainly did kill or hurt a lot of adults, and now that he's in our world, he's carrying on – but it's all in the service of children. Even though he's more than an adult in terms of age, it's clear that Polka's still carrying around the hurt he suffered when his parents sold him into essential slavery, and Polka will use his powers to prevent tragedies befalling other children, or at least help their ghosts if he can't save them. That's a good motivation, and it helps to make his weird friendship with Misaki, the girl who was hired to assassinate the original Polka, make more sense, since her life was destroyed by someone murdering her parents. She may have gone in a different direction, but at the end of the day, both Polka and Misaki have the same basic motivations.

In the heat of an epic battle, Corpse God, an all-powerful necromancer, seals his fate by activating a reincarnation spell. After being defeated by a powerful knight known as Calamity Crusher. Meanwhile, in the future and in a different dimension, teenager Polka Shinoyama has a hit on his name. Through circumstances unknown, after Polka's throat is slashed, Corpse God wakes up in Polka's body. Now trying to live out his goal as somebody who lives in peace and quiet, Corpse God is working his way through his job as an assassin to reach his dreams.

Found with a search for "reverse isekai" manga slit throat