Vampire can survive being staked by absorbing the wood

I believe I read this in the early '90s. (So before I developed my allergy to vampire stories.) I don't recall if this is a short-story or part of a larger work; there aren't any plot details here so it's obviously not complete as it stands.

The protagonist is a vampire and is reflecting on the popular mythology that to kill a vampire you need to drive a wooden stake through its heart. (I don't recall if this is an internal monologue or he's actually explaining it to someone. I'm pretty sure the vampire is male, though.)

The trick is that myth was started by vampires specifically because they can learn (with practice) to almost instantaneously absorb the wood, so their heart can just skip a beat and continue on. But it only works with organic matter, so an iron spike would successfully kill them. If I'm remembering correctly, he first practiced with driving small wooden spikes into his arm, where they wouldn't kill him if he was too slow.

I can't remember anything about the setting, except I think it was modern-ish (approximately 20th century) instead of being mediaeval or completely fantastical. Artificial lights, paved streets, that kind of thing.

That idea is included in C.S. Friedman's 1990 novel The Madness Season. The opening chapter is set in a mildly post-20th century college town, however, the rest of the novel takes place in a number of more fantastic environments (a space ship, an agrarian world, a science lab).

And I opened up. Gave it all the patterns of death that I knew, fixed in images which the Age of Imagination had impressed upon my brain, over and over again, as the truths of my kind. One stood out, so much so that it could make no other choice.

There was a bundle of branches in the corner of the cavern, .... The Giver picked up one of the straighter pieces and struck it against a column, snapping off one end to create a jagged point.

The sharpened stake struck with enough force to drive me back, ...I felt it bite into flesh, pierce a lung, and then accomplish it's appointed goal: a clean thrust through my Raayat heart, transfixing it with wood.

I reflected, as I died, that it was the first thing that had gone right all day.

The next passage is a flashback in which his father taught him to absorb natural materials like wood into his body and shape-shift them to become part of him. And that does involve driving wood into his hand:

Then his other hand stabs suddenly downward, and drives the sharpened wooden shaft through the palm of my hand.

"Iron and steel you must always fear," he warned me, "as well as most stone. But the things that come from living creatures have no power to hurt us, provided we are prepared..." 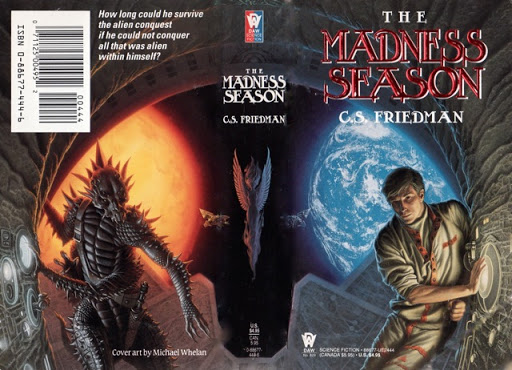 14
A fantasy book about runes where the hero learns to chop wood
9
Which vampire movie starts out showing a staked skeleton, then shows the internal organs reforming around the stake?
7
80s (or earlier) short story about a shaman alien whose story is similar to Jesus'; ends up staked by the planet's aliens
9
Vampire movie about the making of Nosferatu
7
Vampire book series about twin sister high schoolers with one being a vampire
1
Anime where you become a wizard/witch if you survive being attacked by a monster
4
Manga where the main character gets frozen in ice and escapes years later after absorbing the nucleus of the ice queen