How does the Flash breathe while utilizing his super speed?

How do the Flashes breathe utilizing their super speed? The air pressure would be extreme. Do they run in a pressurized bubble?

Most of the Flashes get their powers by channeling an extra-dimensional energy known as "The Speed Force." In fact, most DC characters with speedster-type powers are said to ultimately draw their quickness from this ultimate energy source.

As a result, the Flash in particular can use the the Speed Force to do more than just move quickly. Wally West once pointed out that he creates an aura of protective energy around himself when he hits high-speeds. This aura basically cocoons the Flash from friction-related effects.

In other words, the Flash has to create a personal environmental bubble just to shield himself from burning up due to high velocity friction. Not suffocating is simply a lower level use of his Speed Force shielding ability.

It's simple. He doesn't breathe. Appearances to the contrary, when true speedsters in the DC Universe utilize their powers at their maximum effect, they stop existing solely as beings of flesh and blood and become forms of living energy. Supporting evidence follows. 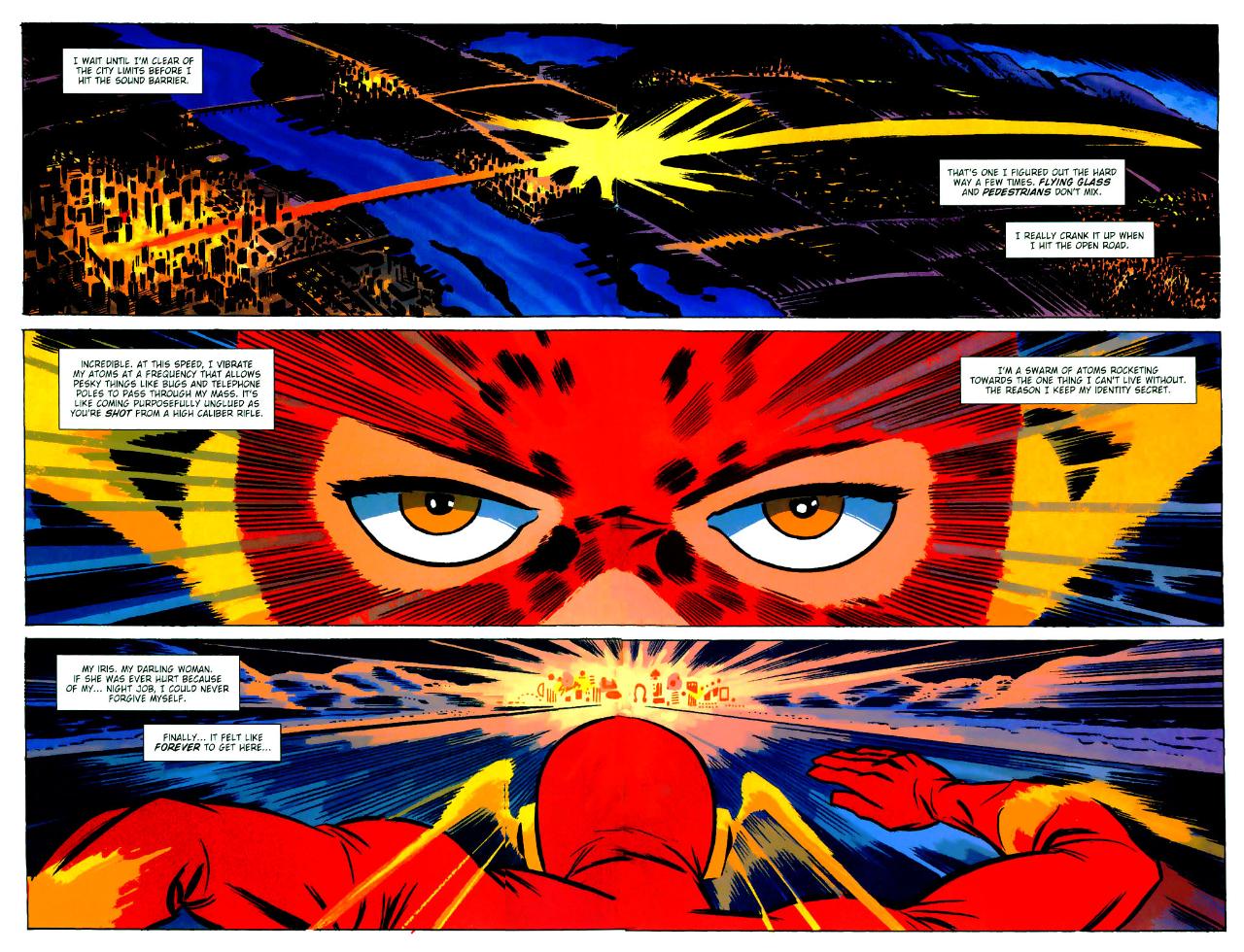 Barry ponders his powers and how they work.

What most people don't know about Barry Allen was while he adjusted to having powers quickly, he used his very scientific mind to understand his powers, methodically exploring them in the early days. This meant his understanding of his powers was not nearly adept as he is now. 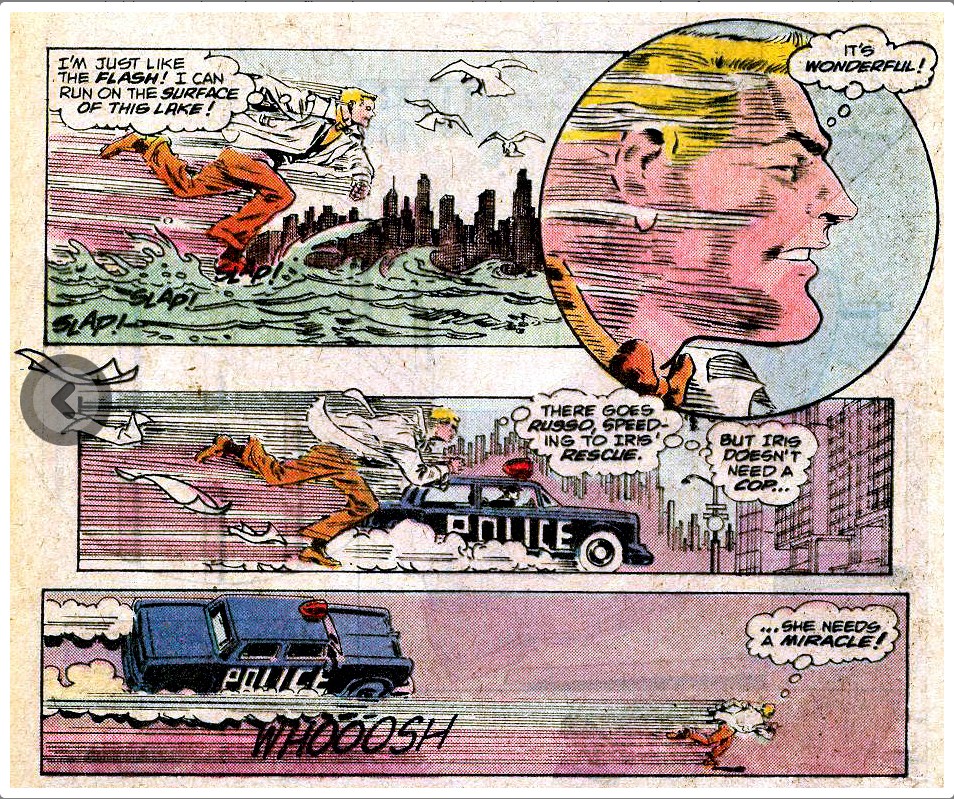 Barry Allen, on the first day he gets his powers, he was a natural. No suit, no boots, and still managing to run on water in his street clothes.

The DC Universe's speedsters are notorious for defying the laws of physics and when the Flashes are moving at superspeed, they are not completely in phase with the universe. Yes, I know it is difficult to consider, but unless they are somehow transformed into energy, what they do is simply beyond the physics of our universe. DC Comics breaks their users of superspeed into two groups, the Speed Force users (true speedsters) and everyone else. 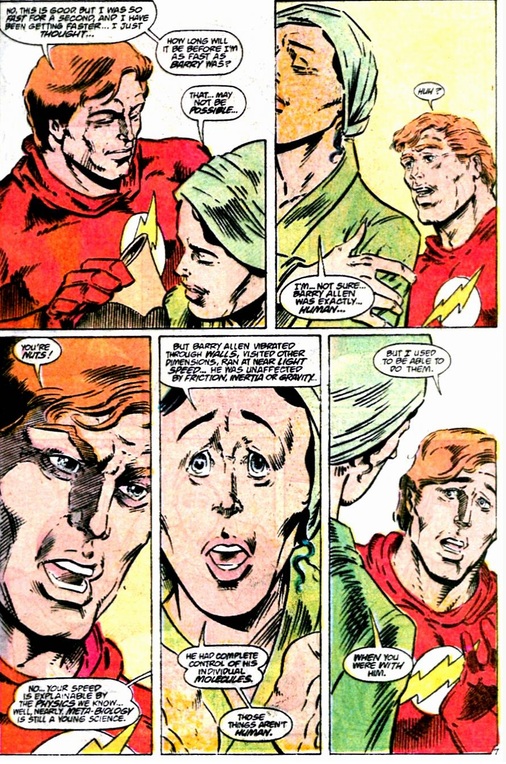 Wally questions the loss of his powers.

Flash Fact: Barry Allen ran so fast at one point during the Crisis on Infinite Earths, he was believed to have died. Instead, he crossed the dimensional barriers merged with the "Speed Force" and moved backward through time to eventually become the lightning bolt that struck him in his lab and gave him his powers. While many writers like the idea that Barry generates the "Speed Force" I prefer to think of it as another natural phenomenon like the Source and he is merely able to tap into its limitless potential.

What I think the speed force does is it syphons off oxygen from the surrounding atmosphere and channels it into the 'aura' for the conduit to breathe. The drawback to this, however is that if there is no atmosphere, then the conduit will quite literally run out of oxygen-and possibly suffocate.

Case in point is that nearly every example I have seen of the Flash running in space, there is always some outside force providing both oxygen and a surface for him to run on-even in 'The Human Race,' where he is running through a time-space wormhole tunnel. The one time he ran out into space without such was when an evil clone of Supergirl tricked him into following him out of the Watchtower onto the surface of the moon-and the same thing happened that would happen to you or me, and he nearly died.

8
Are superheroes with super-speed saving people all the time?
14
Does Flash age slower because of his ability to run at relativistic speed?
9
Can The Flash breathe in outer space?
6
Can the Flash use his powers and super speed without the Speed Force (e.g. outside the DC universe)?
97
Has an injured Flash ever used super-speed to walk on his hands?
5
How can The Flash carry multiple people at once?
1
Does the Flash have super strength?
1
How much time does the Flash need to reach lightspeed?