Is there any known ranking of the most powerful telepaths/psionics/ psychics in the DC universe?

I recently came across a comic panel noting Jonn Jonezz, the Martial Manhunter, as "one of the most powerful telepathic minds on the planet", which falls in line with most data; Jonn has shown himself able to control others, create completely realistic allusions akin to genjutsu, and even link the minds of his Justice League teammates on earth from as far as the moon.

In the cartoons (Justice League, Justice League Unlimited, The Batman, Batman: The Brave and the Bold, and Justice League Action ) these powers aren't usually shown to their full levels; he's usually only shown mind probing, using telepathy, or occasionally lifting others telekinetically. Other martians, like Meg'ann and Mal'E'fek, are shown to be somewhat on par with him, so martian brain power is well established, even if Jonn is noted as one of the strongest. Thing was, the toons tend to focus more on Jonn's physical abilities, like strength, flight and shape-shifting, more than his mental powers.

Despairo is noted as being a powerful psychic as well, capable of enforcing his will over armies.

Maxwell Lord was so powerful he could control the mind of Superman.

Matrix Supergirl was noted as having incredible psychokinetic powers.

And Brainiac's mental powers are often shown more over machines than people, but they are quite formidable.

Raven's psychic powers are immense, but effected by her emotions. They are also harder to gauge, being based in magic.

Generally speaking, however, DC comics and by extension, cartoons, tend to put less focus on their mental empowered heroes than Marvel comics do; "Mental Power" has been a category on most Marvel power scales for over 30 years. Their rankings also seem to be mostly consistent, with their top powerful "Psionics" usually being Professor Charles Xavier, mutants within the Grey/Summers family like Jean, Nate and Hope Summers, Emma Frost, Betsy Braddock, and other beings like Apokolyps (ancient mutant), Mephisto (demon), Game Master (omnipath), the Celestials (cosmic beings) or aliens from the Cree, Shi'arr and other races.

Not too long ago, DC published a list of its fastest beings, seen here: 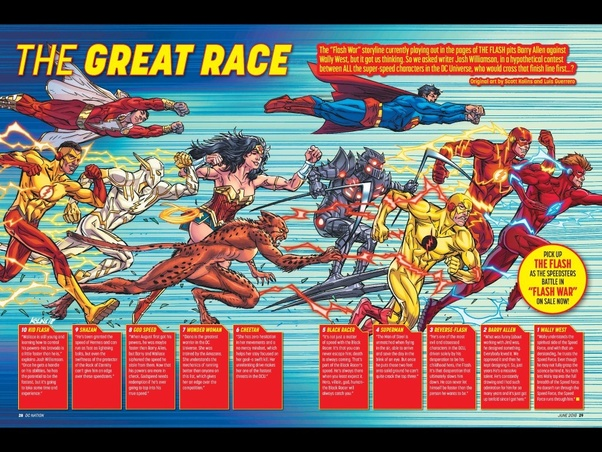 There seems to be no "official" ranking for its "most powerful minds", though.

I was curious if there was a comic or source that could properly identify these characters and maybe even describe their precise abilities?

If no such stated document exists, anecdotal evidence could help.

Unlike Marvel, DC Doesn't really use a scaling system for it's heroes abilities. But CBR keeps a good track on DC bests telepaths

Not the answer you're looking for? Browse other questions tagged dc psychic powers or ask your own question.

29
What happened in Justice League Unlimited final episode?
2
What color is the sun of Apokolips?
10
Who was the first telepath?
10
Why did dirt on Superman's coffin start to float?
5
Is Superman more powerful than the Greek gods?
3
How many different types/colors of Lantern Rings has Batman had access to?
7
Why is Batman acting so out-of-character with Jarro?
5
Is there an official reason why J'onn J'onzz, The Martian Manhunter, was not seen in the 1970s and 80s "Superfriends" cartoons?