Was revisiting the Spider-Man Sin's Past story line, and something doesn't seem to make sense... well, to be fair, that whole damn comic doesn't exactly make sense, but on a less meta note:

Gwen and Norman's kid's had an accelerated growth rate, ostensibly due to the "Osborn blood" in them, blood which had been altered on the genetic level by the Green Goblin formula of their father. 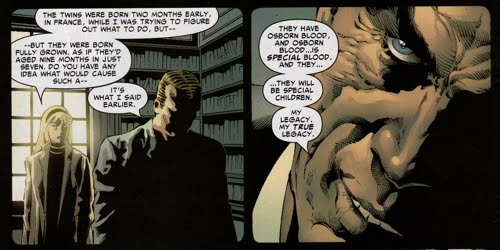 This explains their adult ages in such a relatively short time, and how they were so smart; they were raised by "Uncle Norman" to hate Spider-Man and Peter Parker, supposedly for "killing" their mother, and see Norman as a benefactor. 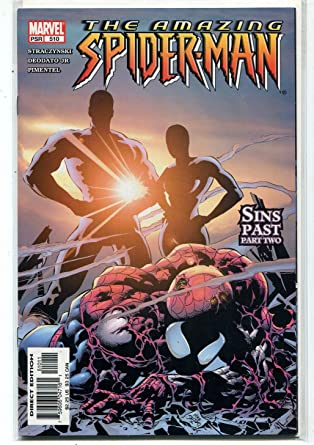 But if this were true... is there a specific reason why neither of them didn't seek out Harry Osborn when they were in New York?

By most accounts, Harry and Peter were still friends at this point, and they were doing surveillance on him for a while, so it's likely they would have heard about Harry at some point! Considering he would have been their "cousin", why didn't they take some interest in seeing him, especially if it was to keep him safe while they tried to kill Spider-Man.

The very short answer: When "Sins Past" was first published, Harry Osborn had been dead for over a decade (our time -- less from Spider-Man's point of view).

Now to elaborate a bit. I looked at his Wikipedia page to confirm a few dates and other details. Harry debuted in a comic book in 1965, soon became the best friend of fellow college student Peter Parker (as you said), was briefly the mentally-disturbed second user of the villainous role "The Green Goblin" in the mid-1970s, but got over it, and finally died in The Spectacular Spider-Man #200 (May 1993).

J. Michael Straczynski's six-part "Sins Past" story arc was published in The Amazing Spider-Man #509-514 -- dated August 2004 through January 2005. Harry was still very much dead and buried, thus staying offstage, in that timeframe. Later, someone at Marvel must have finally given the green light for bringing him back from the dead as a side effect of how Mephisto had recently been tampering with Spider-Man's history. Wikipedia says that Harry's return as a living, breathing character was revealed to the readers in The Amazing Spider-Man #545 (December 2007).

So, by the time Gabriel and Sarah were "all grown up" and arrived in New York City and started doing surveillance on Peter Parker and his family (his wife Mary Jane and his Aunt May), Harry had literally been dead and buried for a long time, and there was no reason for his long-lost half-siblings to take any special interest in his moldering corpse at that late date. Almost three years later, he was finally walking and talking again. This means that while the first trilogy of Spider-Man films kept depicting Harry Osborn as a key member of Peter Parker's supporting cast (until he died at the end of the trilogy), he was dead the whole time in the regular monthly comic books set in the continuity of the mainstream Marvel Universe. By the time the comic books brought him back, the movie version of Harry had just recently died bravely at the end of Spider-Man 3 (released earlier in the year 2007).

P.S. I agree wholeheartedly with your comment that "Sins Past" didn't make sense. Shortly after a trade paperback collection of it was published, I read it and then wrote what I intended as a scathing parody, more or less in the same tradition of how Mad magazine treats blockbuster movies, in which I had the characters constantly commenting on how illogical their own actions were at various points in the plot development. I posted it on some comic book discussion forums and got some appreciative reactions.

6
In “One More Day,” did Spider-Man really have to make a deal with Mephisto?
8
What comic book line does The Amazing Spider-Man hope to follow?
10
Is the Green Goblin a split personality of Norman Osborne or a separate malevolent entity?
18
Has Spider-Man ever sold or financially profited from his webbing?
8
Why would Octavius throw a car at Peter?
0
Does Aunt May ever (permanently) learn that Peter is Spider-Man?
13
How many types of webbing does Spider-Man have?
1
What is the formula for Spider-Man's base web fluid?
3
Did the events of “One More Day” erase Mary Jane's pregnancy from the timeline?