Was there an evil version of Dark Hawk? Not one from the future, but a bad guy with a whole other amulet?

The Marvel 90s character Dark Hawk was pretty "Spider-man-esque" in terms of story; a high school kid, Chris Powell, gets super powers by accident, in the form of an alien amulet which grants him a super durable android body with Spidey-level strength, Capt America speed, stamina and senses, force blasts, an energy shield, a grapple claw, and flight. 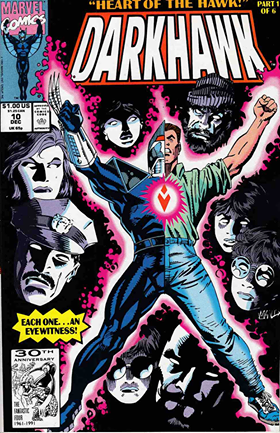 Hr proved a fairly effective hero, helping out bigger names like Spider-Man himself, Iron Man, the New Warriors, and the West Coast Avengers at one point. I remember him facing off against another being who had armor similar to his, but damaged and cobbled together (torso and helmet like Dark Hawk's, but green, his amulet was removed and he had a cyber arm), but he specifically mentioned a character, Evil Hawk, in one book.

Is this the same character, or are they different? (As stated, this character's amulet was gone, so it's unlikely.)

Is there a scan of this Evil Hawk anywhere? What is his origin and how is he connected to Dark Hawk?

These are two separate characters:

Please note that this origin story was retconned in War of Kings, and that Evilhawk never existed. I believe the entire Evilhawk incident was just imagined by Powell. The new origin was based around an organization called The Fraternity of Raptors.

10
Was there a one-off Spider-Man public awareness / anti-drug comic given away with chocolate pudding in the early 90s?
5
When or how precisely did Venom (Eddie Brock) turn from villain to hero?