Why did Ahsoka's lightsaber grip change?

When Ahsoka first appeared, she consistently used one lightsaber in a reverse grip, occasionally switching to a normal/frontward grip when the situation required 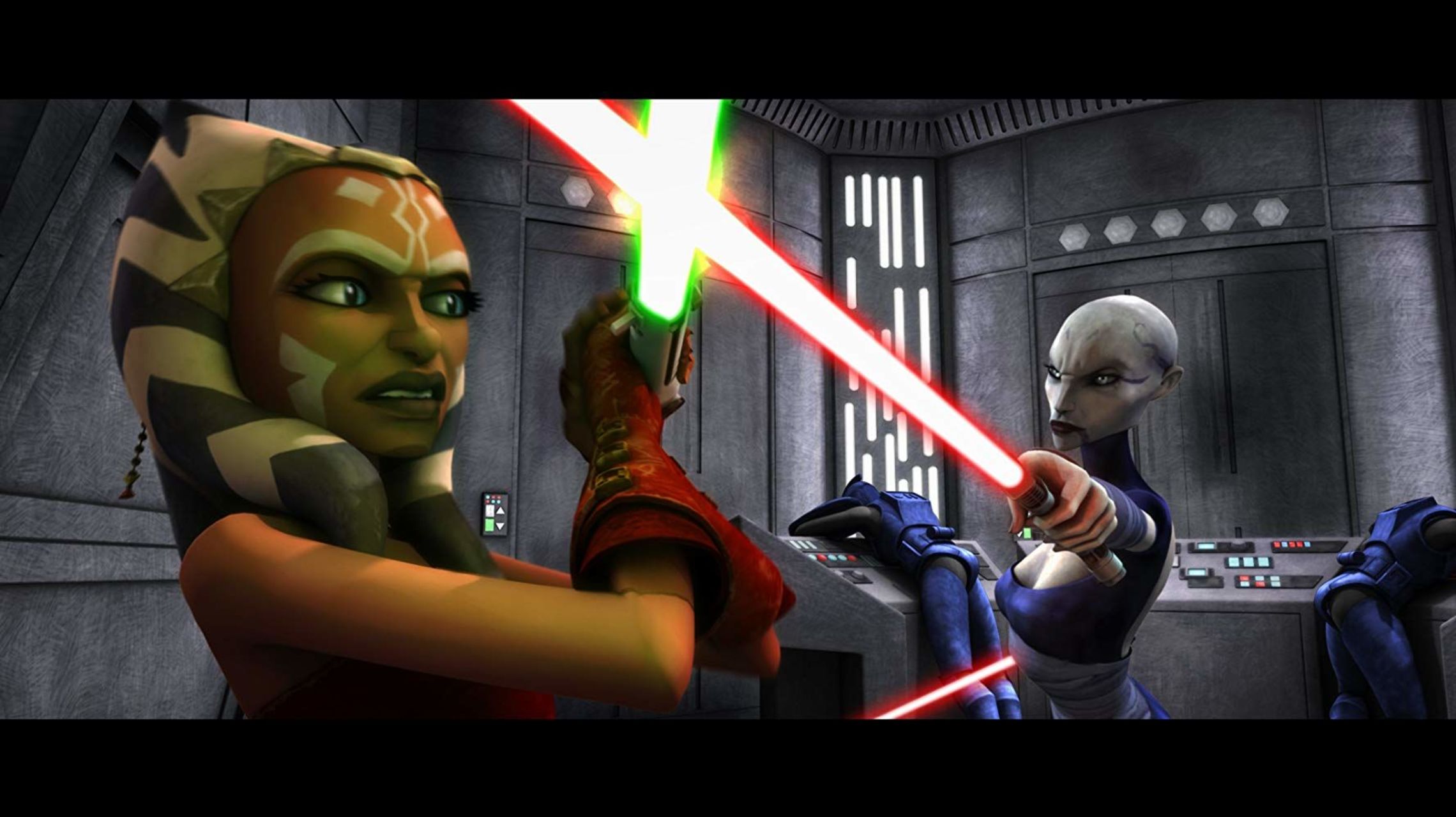 (It's hard to see, but she is using a backwards grip here. I couldn't find a better picture)

When she got her shoto, she began using both lightsabers in a reverse grip. 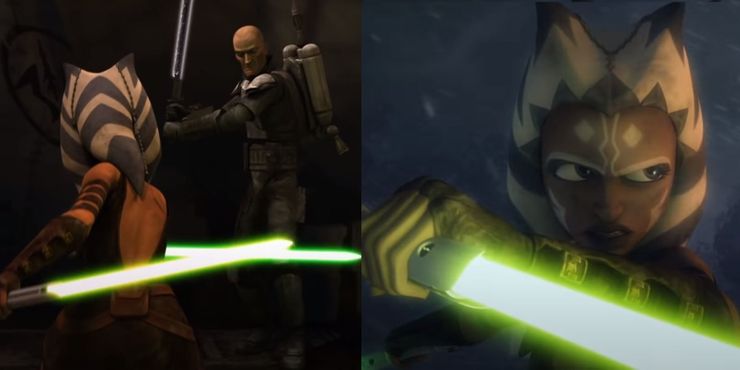 Later, when she had her white lighsabers, she used her previous style of mostly using a reverse grip and occasionally switching to a front grip on one or both lightsabers when the situation required it. She does seem to favor a front grip a little bit more during this period, which makes sense since, as far as I can tell, a front grip is superior in lightsaber v. lightsaber combat since it allows more powerful strokes, but a reverse grip can be more effective for blaster bolt deflection because it favors more movement (speculation), and she would mostly be avoiding using her lightsabers to stay hidden and only using them to fight other lightsaber users until she becomes an open rebel. 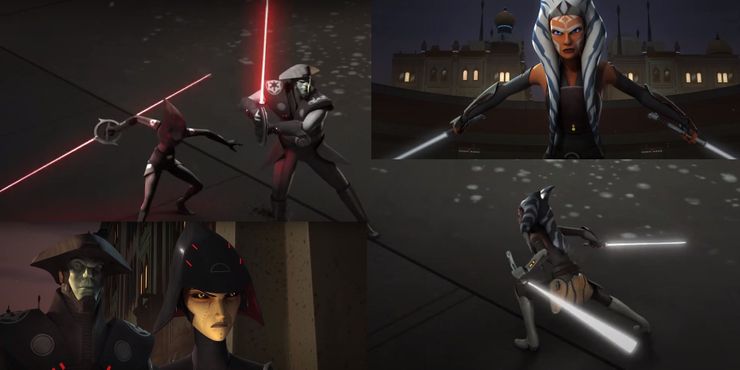 During the Siege of Mandalore, once she got her lightsabers back (but blue, for some reason), she began mainly using a forwards grip on her main lightsaber and a backwards grip on her shoto. This change doesn't really make sense, because she wouldn't have had a chance to practice with her lightsabers since leaving the Jedi order, and she is planning to fight someone very dangerous, which is not the time you would want to be experimenting with a new technique. She even does this when being shot at by a large group, when her previous style of two reverse grip lightsabers would seem to be superior. Why did she do this, or is it just my perception that she normally used reverse grips? 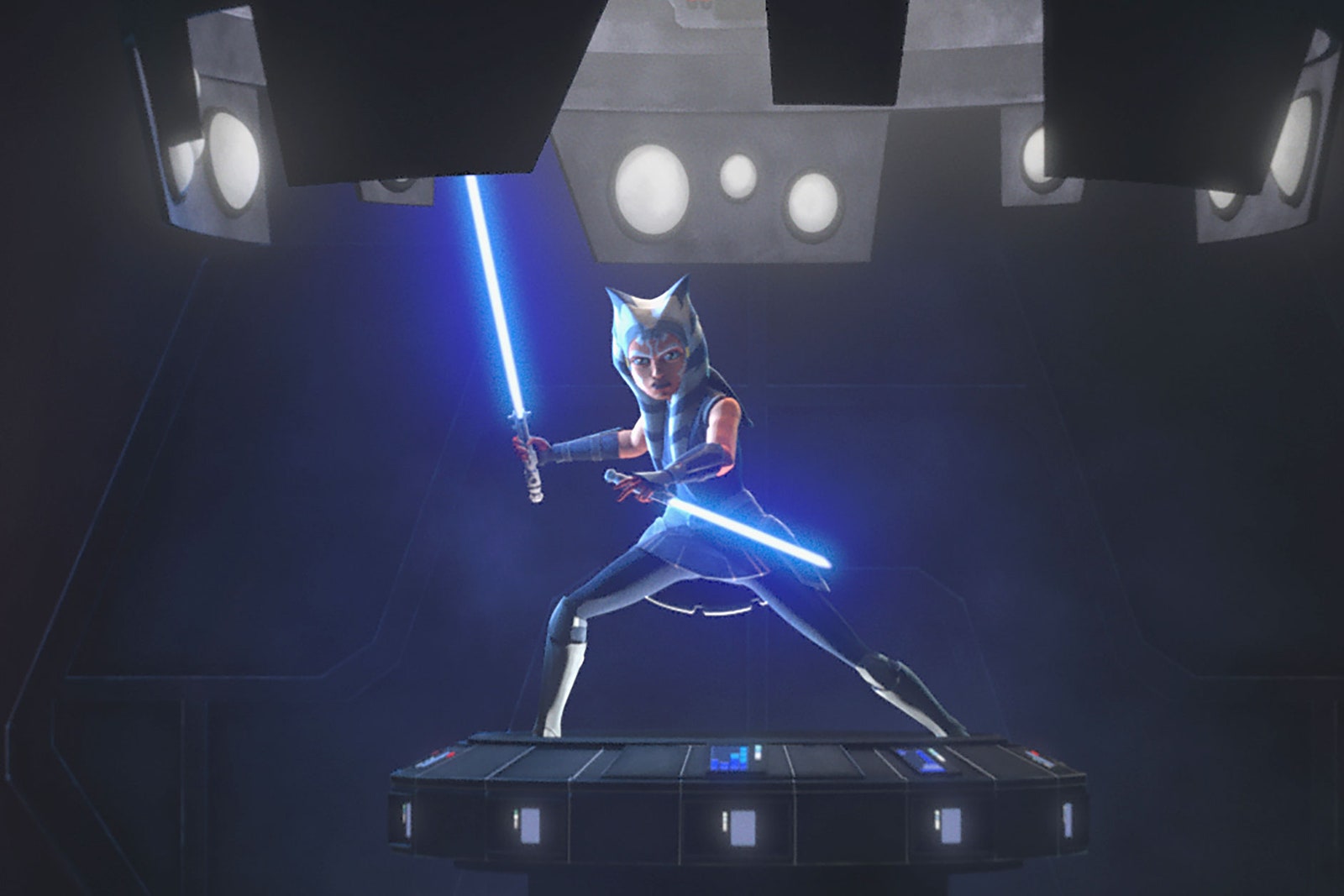 (two pictures of Ahsoka about to be shot at)

This pertains to the fact that she very rarely fought other people with her green lightsabers. She would mainly use Jar’Kai (fighting with 2 lightsabers) defensively, returning blaster bolts to the clankers. When she fought other people, she would switch to forward grip because it is much easier to slice and stab in that grip. If she continued to use reverse grip, her fighting style contained a lot of sweeping slices. When she was fighting Maul, the thing was filmed with motion capture, thus the actor used the blades in forward grip.

If you see the arc with obi-wan disguised, there's a scene when it seems she uses forward grip and reverse grip to protect more of herself, so that could be part of it

Not the answer you're looking for? Browse other questions tagged star-wars the-clone-wars ahsoka-tano or ask your own question.

20
Outside of Order 66, does a blaster ever beat a lightsaber?
17
How is Kylo Ren's lightsaber able to have a cross at the hilt?
5
How does Ahsoka know about Anakin wanting to leave the order?
10
Ahsoka Tano's Lightsaber Fighting Style
49
Is there an in-universe explanation given to the senior Imperial Navy Officers as to why Darth Vader serves Emperor Palpatine?
5
When did Vader find Ahsoka's lightsaber?
2
What is the instrument used to play Ahsoka's theme when she leaves the Jedi Temple?
8
Did Ahsoka know Padme was pregnant?