I'm looking for a book I read 5-6 years ago. I know I found it on top fantasy books at the time. Unfortunately, I couldn't find the book in question during my recent searches.

I never finished the whole book, but I do remember the main character is an ordinary guy owning a shop in some sort of a city. I'm certain there is no magic involved with him or the rest of the world, but one day he meets a woman and falls in love with her at first sight.
They looked like an unusual couple, he was relatively short, she was tall. He was below average looking, she was beautiful. That sort of a thing.

They end up together somehow and he sells/closes his shop to marry her and move into her house. Once he gets there he is introduced to the whole family and for the first time, he encounters magic. There's a certain scene involving a lake behind the house and some sort of a magical ritual happening on it. It might be they got married there.

Unfortunately, I stopped reading there, as I was preoccupied with college at the time.

As per Dragan Milosevic's comment, I'm elaborating a bit on the community wiki answer.

John Crowley's 1981 novel, Little, Big: or, The Fairies′ Parliament is a match. 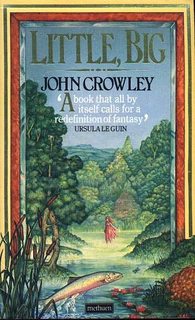 Turn-of-the-century American architect John Drinkwater begins to suspect that within this world there lies another (and within that, another and another ad infinitum, each larger than the world that contains it). Towards the center is the realm of the fairies, which his wife, the Englishwoman Violet Bramble, can see and talk with but he can′t. Drinkwater gathers his thoughts into an ever-evolving book entitled The Architecture of Country Houses, which goes through at least six ever longer and more mystical editions.

Somewhere around the start of the 20th century, Drinkwater designs and builds a house called Edgewood north of New York City. It is a composite of many styles, each built over and across the others, supposedly as a ″sampler″ for customers thinking about employing Drinkwater's firm. It has the effect of disorienting visitors and somehow protecting the family, and it proves to be a door leading to the outer realm of Faerie.

At the beginning of the story, well after the deaths of Drinkwater and his wife, their great-granddaughter Daily Alice falls in love with and marries a stranger, ″Smoky″ Barnable. Alice has only briefly met Smoky at the home of her City cousin George Mouse. Smoky gradually realizes that Alice and her sister Sophie claimed to see fairies when they were younger and that they and their family see their history as ″the Tale″.

Indeed, Alice is taller than him:

She was nearly six feet tall, which was several inches taller than Smoky; her sister, just turned fourteen, was as tall as he, Their party dresses were short, and glittered, hers red, her sister’s white; their long, long stockings glistened. What was odd was that tall as they were they were shy, especially the younger, who smiled but wouldn’t take Smoky’s hand, only turned away further behind her sister.

He does not own a shop that he sells. Rather, he works as a clerk, checking machine-read addresses for issues.

He worked in a wide, white room where the little sounds he and the others made would rise to the ceiling and descend again strangely altered; when someone coughed, it was as though the ceiling itself coughed, apologetically, with covered mouth. All day long there Smoky slid a magnifying bar down column after column after column of tiny print, scrutinizing each name and its attendant address and phone number, and marking red symbols next to those that were not the same as the name and address and phone number typed on each card of stack after stack of cards that were piled daily next to him.

And indeed, the wedding, the completion of the Tale, is in a gazebo on an island in a lake:

Beyond the Summer House they descended a concave lane, quickly swallowed up in a wood tangled and somnolent, moist from the rain. It seemed the kind of wood grown to hide a sleeping princess till her hundred years were up. They hadn’t been long within it when there was a rustle or a whisper beside them, and with a suddenness that startled Smoky, a man stood on the path ahead of them. “Good morning, Rudy,” Cloud said. “Here’s the groom. Smoky, Rudy Flood.” Rudy’s hat looked as though it had been fought with, punched and pummelled; its upturned brim gave his broad bearded face an open look. Out of his open green coat a great belly came, tautening his white shirt. “Where’s Rory?” Cloud asked.

The path came out into a wide, sloping glade, the marge of a dark lake that still and moatlike surrounded an island where aged trees grew. Leaves floated flat on its surface, and frogs fled from their feet as they came down among its pools. “It’s certainly,” Smoky said remembering the guidebook, “an extensive estate.”

“The further in you go, the bigger it gets,” said Hannah Noon. “Have you met my boy Sonny?”

Across the lake a boat was coming, laying out lacquered ripples. Its carved prow was intended for a swan, but it was gray and eyeless now, like the dark swan on the dark lake of northern legend. It struck the bank with a hollow rattle of oarlocks, and Smoky was pushed forward to board with Cloud, who was still explaining who was who of the laughing wedding-guests. “Hannah’s distantly related,” she said. “Her grandfather was a Bush, and her grandfather’s sister married one of Mrs. Drinkwater’s uncles, a Dale…” She saw that he wasn’t listening, though his head was nodding mechanically. She smiled and put her hand on his. The lake island, shadowed by its trees, seemed made of changeful green glass; myrtle grew on its gentle slopes. At its center was a round gazebo, its pillars slim as arms, softly domed and greenly garlanded. There, a tall girl in white stood among others, holding a ribboned bouquet.

Per the suggestion by Dragan Milosevic in comments above, this is John Crowley's 1981 novel Little, Big.

6
Fantasy trilogy about teenagers transported into a magical world, inheriting each branch of magic, including necromancy, dwarves and elves
13
Identify a story about a teen boy who learns to use magic with his lizard companion
4
1990s Movie seen on TV about a (maybe) magical teacher
7
Book series: guy becomes a vampire, creates portals to travel between different worlds to avenge the girl who turned him
19
Book about magical siblings and 3 different worlds
8
Book identification: children's book about family of vampires
8
Fantasy book where a sorceress drafts a thief into helping her save the world
5
Recent book about a disease that turns people into half-dragons