I saw this Soviet sci-fi movie in the '80s, but think it was made earlier, maybe '60s/'70s? A very few aliens come to Earth, to Russia, I guess. One of them, a blonde woman (perhaps after shape-shifting?) falls in love with a local man. But the authorities are on the aliens' tail. In the climax, perhaps on an open field, the authorities catch up with them. She uses her special powers to slow time / partially freeze the pursuers, and manages to save her love, but is shot in the process (the scene shows her taking a bullet to the torso, and falling to the ground, in slow motion), and doesn't make it.

I suppose the movie's message is against xenophobia. I might be off on some of the details, sadly. 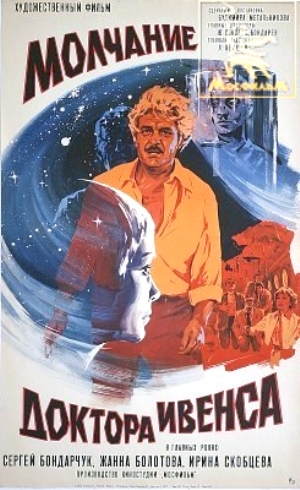 As a result of the catastrophe over the Atlantic, the plane , which, among other passengers, is Dr. Martin Evans, falls into the ocean.

Aliens from the planet Orange rescue the surviving passengers by removing them from their memorydetails of the disaster. The rescued unsuccessfully try to figure out what happened to them. Being in a dilapidated plane, which is in an unknown space, the absence of debris and victims of the disaster cause confusion and ambiguous assessments in them. There is an obsessive feeling that someone is watching them. Trying to get in touch with these unknowns, passengers receive a signal that they are being heard. They are then greeted remotely, announcing their salvation. For "official negotiations," the aliens invite Dr. Evens as the most educated of the passengers. From them, the doctor receives information about the planet from which they flew, as well as the purpose of their visit. As it turned out, their planet is smaller than Earth, but more ancient.At some point, its inhabitants became unbearably lonely in the depths of space and they sent an expedition in search of other civilizations. Aliens also introduce Evens to their exceptional ability totelepathy , teleportation and longevity . They are benevolent, but emotionally more restrained and more strict in their reasoning than earthlings.

Further events develop on one of the islands in the northwestern part of the Atlantic Ocean, where the aliens deliver passengers. In long dialogues with aliens, the doctor tries to convince them to open up to the world and help him in his scientific work dedicated to the extension of human life.

An alien reconnaissance ship is attacked by an earthly warplane, resulting in the death of the alien Buami. In connection with this incident, as well as after the aliens got acquainted with the sad earthly realities, such as hunger , wars , diseases , the disunity of peoples and states, the absence of uniform laws, the aliens inform Ivens of their decision: contact with earthlings and the opportunity to reveal to them the secret of prolonging life premature. Aliens disappointed chtĂłthey learned about their long-awaited "brothers in mind". As a result, they refuse Evans further cooperation, citing the fact that people have not yet reached true morality, and they erase from all the saved, except for Ivens, the memory of what happened. In turn, the doctor promises the aliens to be silent about what he learned from them, assuring that earthlings can even go to death for the sake of an idea.

Orante, a woman from the alien crew, despite the moods of the other crew members, feeling the sincerity of the doctor's motives, feels sympathy for him and realizes that not all earthlings are the same. In the process of communicating with Dr. Orante, he decides (contrary to the instructions of his fellow tribesmen) to share earthly life with people, whatever the cost.

The aliens leave the passengers on the island, where the search and rescue teams find them. Many media outlets report the miraculous rescue of those who survived the disaster, and the public is showing interest in them. Dr. Evans returns to daily life, but his memory retains the details of an incredible meeting. He reconsiders a lot and understands that the results of his scientific works can be used by those who pursue purely selfish goals (which the aliens feared). For this reason, Evans, speaking at the conference, announces that he is not going to continue research on finding ways to prolong human life. The position of the doctor does not find understanding among the scientific community, and his wife believes that he simply fell into madness .

The alien mission is still on the planet, but is already preparing to leave it. Orante periodically visits Ivens at his home, becoming invisible when necessary. However, the doctor's wife sees more and more oddities in her husband's behavior.

The doctor is already being followed by special services. Once agents break into his house when Orante is also there. She manages to disappear, and the agents search and interrogate Ivens. Intelligence agencies need information about what really happened in the North Atlantic, as the military began to notice strange phenomena in the area of â€‹â€‹the plane crash.

At a certain moment, having received a sign from Oranta that the time has come to reveal the secret, the doctor informs the agents about the aliens: who they are and for what purpose they arrived on the planet. The agents are trying to take the doctor into custody. Orante helps him escape, stopping the kidnappers with hypnosis. For a while, Evans and Orante leave their pursuers.

The doctor, in spite of everything, is going to tell people the truth about guests from a distant world. But what was conceived is not given to come true: they are pursued, Oranta teleports, and Ivens, being ambushed on the road, suffers an accident and dies. Orante appears. She's trying to help the doctor. She is surrounded, she first resists with the help of her unusual hypnotic abilities, but then she herself dies from a gunshot wound...

3
60s or 70s movie with a submarine that flies
11
SF movie/tv show from 60s/70s about a fake/duplicate earth
5
60s or 70s made-for TV sci-fi movie with brain washing and Japanese agents
4
A 60s-70s movie where a woman crashes spaceship, later stalked and kidnapped by man
12
Identify weird Sci Fi movie from 70s/80s
4
Looking to identify sci-fi magazines/comics from the 60s and 70s
6
60s-70s sci-fi show/episode about time slow-down
7
60s/70s movie with buggies and time-shifting protagonist
4
A sci-fi tv BW movie from the 70s with a mini-sub and a kraken