Which version of The Return of the King contains this changed line?

That line was broken!

However, for as long as I can remember watching this scene as a kid (in the DVD theatrical cut), I remember the line being:

That blade was broken!

I suspected that Jackson changed this line for the Extended Version, based on several Reddit threads (and based on the upvotes, at least hundreds of people) remembering the line in the same way.

I then found the following in the movie's Alternate Versions section at IMDb:

When Aragorn reveals Anduril to the King of the Dead, some prints of the film has his reply as "That blade was broken", while in other prints his response is "That line was broken."

Which versions of the movie contain "That blade was broken" as opposed to "That line was broken", and does any bonus material shed light on Jackson's reasoning for that decision?

The evidence suggests that the line was always "that line was broken" and the "alternate version" explanation was invented around the time of release after fans came out of the theater disagreeing about what the King of the Dead actually said. Keep in mind that IMDB trivia and quotes are user submitted and edited, and that the IMDB of 2003 was even more unmoderated and rumor-prone than it is today.

In the final shooting script, it was "that line was broken." 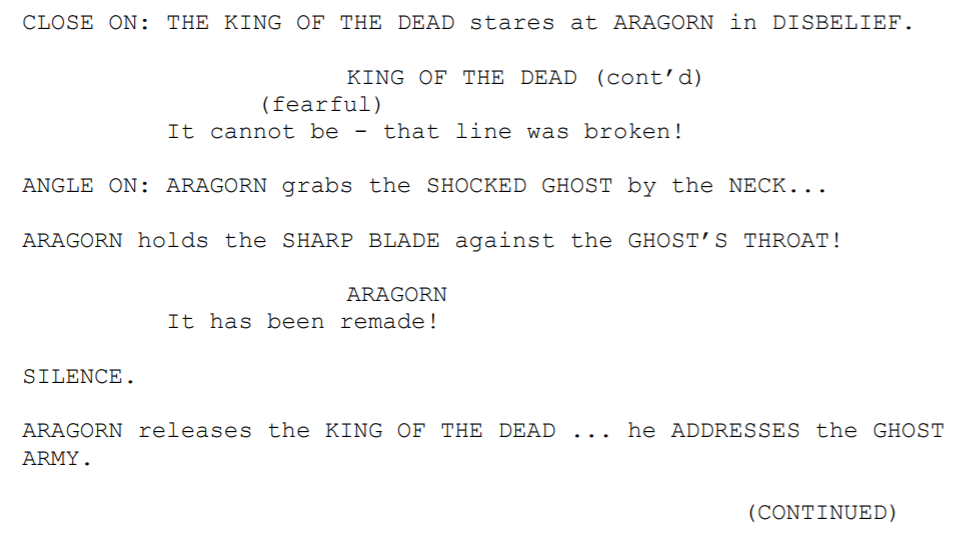 If you follow the link you'll note that this was the October 2003 revision submitted for Oscar consideration before release. Editing on Return of the King wasn't actually finished until November-- yes, Jackson cut it that close to the December release-- which presumably explains why "it cannot be" was still in the script despite ultimately being cut. But because the line definitely was edited down after this version of the script, it's not definitive.

So where did "blade" came from? Well, first, there's some Mandela Effect going on here. One of the common attributes of the Mandela Effect is that the "corrected" memory often feels more correct due to outside context; ex. there are millions of people whose last name ends in "stein," so of course it's "Berenstein Bears," not "Berenstain." Millions of Lord of the Rings fans streamed into theaters having spent months, years, even decades having obsessed and delighted in "the blade that was broken." If you were like me, you could recite the poem by heart. It was even a major sticking point in online communities at the time that the first film deviated from the books by having Aragorn leave the sword behind in Rivendell.

And then during the film, the sword made it's glorious appearance, they recited that poem as they remade it, and the dialogue made multiple references to "the blade that was broken." And then Aragon prominently used that blade to stop the King of the Dead's attack after Legolas's arrow demonstrated mortal weapons weren't effective. It makes so much sense for the line to be "blade," that people were already primed to misremember the line even if didn't sound anything like "blade."

But that brings us to the heart of the issue. Take a listen to the version of the scene in the extended edition, which everyone agrees is definitely supposed to be "line."

...It kinda sounds like "bline." You can really hear the b- if you watch the video at 1/4 speech.

It'd be a heck of a coincidence if two prints of the movie went out with "blade" and "line," but also the "line" version really, really sounds like it could be misheard as "blade." Most likely one version of the film went out, and some people thought the actor misdelivered the word "blade," and some thought he misdelivered "line."

We actually have some documentary evidence of this happening. Several fan transcripts of Return of the King went up around this time based on the DVDs.The AgeOfTheRing.com transcript of the Extended Edition-- which again, everyone agrees is a "line" version-- says that he said "blade."

Helping the misinterpretation theory is that some people thought they heard a third version of the line. These two transcriptions thought he said "bind" In a movie forum dating to February 2004, you have one user saying his favorite line in the movie was "the blade was broken," while another user says it was "that bind was broken." I don't think anyone thinks there was a secret third version of the movie floating around theaters, do they?

tl;dr, it's impossible to prove a negative, but Occam's Razor is that the line has always been "line," but a lot of people misheard it as "blade." It would have made things easier for everyone if the line was different or if the editors used a different take without a slight b-. But as is... the line is broken.

According to my copy of the theatrical edition, the line is the same:

Not the answer you're looking for? Browse other questions tagged tolkiens-legendarium adaptation-comparison the-return-of-the-king or ask your own question.

54
Is there more to Arwen than her obsessive love for Aragorn?
30
What kind of Wraith would Frodo have become?
37
Why is Arwen dying?
29
When and why did Bilbo write a song about Aragorn?
43
What did Aragorn do with his sword between the battles of Pelennor Fields and Morannon?
12
Did Elrond want and expect Aragorn to become the King of Gondor and Arnor?
12
Did names have any special significance in Lord of the Rings?
32
Would the dead answer to Aragorn if he DID NOT have Andúril?
34
Does this cut material from Rogue One still appear in the novelisation?