What are the snork appendages on Snorks heads actually for?

The 1980s Hanna-Barbera cartoon The Snorks introduced the world to the titular society of characters; essentially multicolored, 3-6 inch tall, humanoid creatures who live on the ocean floor. Ostensibly "Smurfs, but under water," the show was lighthearted with a balance of character and story driven plots. Snorks apparently have existed for thousands of years, evolving to live under water optimally, but also being capable of living on land. In the first episode, we get a scarce bit of backstory, including the first recorded human encounter of Snorks some centuries prior by a sea captain:

In that first snippet, the size and look of the Snorks is basically laid out. The flashback to modern times (then 1980s) clearly shows that Snorks are sentient, with equal to human intellect, if not greater in some cases; they have a fully functional society with seemingly few social ills (very little Snork-on-Snork crime, and Snorks of all colors seem to live together seamlessly), have their own culture (food, fashion, education, businesses, sports, leisure, practices, values, slang; basically a fully functional modern society), build communities (including politics and maintaining nuclear families), and have impressively advanced technology (undersea electricity, steam-powered devices, telecommunications, and even military applications!).

Beyond that, the Snorks seem to mostly live in harmony with other sea life, taking what they need without harming the ocean, and either domesticating it (riding sea horses, having pet fish and octupi), knowing the danger of it (giant crabs, sharks, etc) or outright communicating with them (literally talking to fish!) And to top it of... Somehow the Snorks are fluent in human terrestrial English! ...at least, the ones shown in the vicinity of modern North America seem to speak and understand human English easily as a native language! So obviously the Snorks seem to have evolved somewhat in tandem, if separately, alongside humans.

However, there are some confusing aspects to them... not the least of which are the titular "snorks" they are named for (the extended appendages which protrude from the top of their heads). 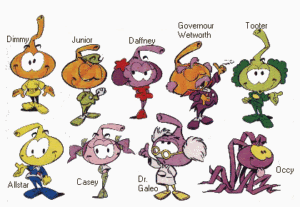 One would think that these would be used for taking in oxygen, similar to a human "snorkel"... but that's not true; all Snorks are shown to spend the majority of their lives underwater, with few venturing to the surface at anytime, at all. Now obviously, Snorks are truly amphibious, being able to breath and function on land easily for extended periods of time as easily as they do in the water, but it's never been implied that they "need" to go to the surface and take oxygen. If anything, their bodies seem more greatly adapted for sustained underwater living; note the big eyes to take in more light, and flat, flipper-like feet which can walk, but more easily push water like fins, of which males seem to generally be larger than females, indicating sexual dimorphism​. They also possess hair (though normal cold ocean depths don't seem to bother them much), and opposable thumbs for tool manipulation.

This odd mix of features bodes the question:

What exactly are the snorks on the Snorks heads for?

One would think they would be for breathing, and air bubbles have been shown to come pout of them... but again, they don't take in air regularly at all. In the first season, it's implied that Snorks can be seen as natural elements of attraction (like pretty skin, healthy hair, or other nice features) when one female Snorks​, Cassie, becomes insecure about it being overly large and wishes she had a "pretty one, like Daphne's!" Snorks are also shown to be physically resilient, even being able to support the weight of a Snork while they dance... upside down!

Yeah, perhaps reading a bit deep, but even as a kid, it always bothered me, because no real "purpose" seem to exist for these body parts. Was this perhaps addressed in show, or in a comic somewhere?

The snorkles are used for jet propulsion under the water.

Per The Art of Hanna Barbara:

All Snorks were equipped with snorkles, protruding gills that propelled them swiftly through the water.

One example of this is JoJo, who sports two snorks, and is consequently shown to be faster than the other Snorks.

Not the answer you're looking for? Browse other questions tagged the-snorks or ask your own question.