I remember seeing a cover on a paperback book by Andre Norton with a boy riding a device like a surfboard flying in the air. I don't remember if there was a tower or a "terror dactyl" on the cover.

If my memory is correct I probably saw the cover in the 1960s so a book or edition published after 1970 would probably not be the one I remember.

Unfortunately Andre Norton was very prolific, so that does not limit it down very much.

But after searching at the Internet Speculative Fiction Database I found a cover which should be the one I remember, the cover of the 1963 Ace Books edition of Star Gate. 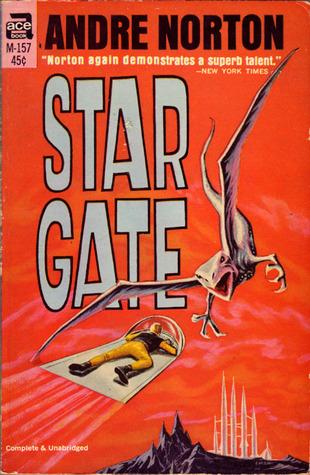 From the plot summary on Wikipedia:

Riding his larng Cim, the four-eyed analogue of a horse, and accompanied by his pterodactyl-like hunting mord, Vorken, he leaves the only world he has known, following a map that his grandfather gave him. Falling in with a party of cross-breeds and a Star Lord, he helps them fight off outlaws and follows them through a pair of luminous webs to another Gorth. As they pass through the Star Gate Kincar is burned by an amulet, a Tie, that he wears. Joined by others, the group takes refuge in an abandoned keep that they find on their new world. Kincar meets a healer, Lady Asgar, who treats his burn while Lord Dillan tells him about many worlds and of travel between them. They have come to a Gorth that they had not intended to occupy, so they will have to build another Star Gate.

7
Title of a sci-fi book with time-travel and sentient dinosaurs
4
Seeking title of sci fi book with 'bee camera' global paparazzi
12
Sci-fi book with the title "On"
17
Sci-fi short stories where the title had the word "box" in it
9
Science Fiction Novel with the Word Diamond in the Title
16
Sci-fi book featuring xenophobic aliens with hydraulic activated limbs
6
Book identification: '90s sci-fi, "Kilimanjaro" in title