Ask Question
Asked 2 months ago
Active 2 months ago
Viewed 1k times
8
This question already has an answer here:
Book series about a man who discovers advanced alien artifacts on the moon (1 answer)
Closed 3 months ago.

Back in the late seventies I began collecting a sci-fi series. There were just a ton of them, and they were all pretty standard pulp sci-fi hero stuff, all about the same hero and, I believe, by the same author... someone who later became famous and wrote these under a pseudonym. My mom chucked the books while I was overseas, and I can't remember what they were. I thought it was the Lucky Star series by Asimov, but those were only six books.

I suggested this in the comments as wild guess as the description was "pulp fiction, long-running from the 1970's" which put in my mind the Perry Rhodan series. Turned out to be correct as mentioned by the person asking, even though this series started in the 1960's.

As confirmed by the OP in comments, this was the Perry Rhodan series.

Wikipedia says of the series:

And describes the basic plot as:

The story line starts in 1971 with the first manned moon landing by U.S. Space Force Major Perry Rhodan and his crew, who discover a marooned extraterrestrial space ship from the (fictional) planet Arkon in the (real) M13 cluster. Appropriating the Arkonide technology, they proceed to unify Terra and carve out a place for humanity in the galaxy and the cosmos. (The concepts for two of the technical accomplishments that enable them to do so—positronic brains and starship drives for near-instantaneous hyperspatial translation—are direct adoptions from Isaac Asimov's science fiction universe.)

As the series progresses, major characters, including the title character, are granted relative immortality. It is relative in the sense that they are immune to age and disease, but could suffer a violent death. The story continues over the course of millennia, including flashbacks thousands and even millions of years into the past, and the scope widens to encompass other galaxies, extremely remote parts of space, parallel universes and weirder cosmic structures, time travel, paranormal powers, weird/cute/aggressive aliens and bodyless entities (some with sheer god-like powers).

The first few English translations appeared with these covers: 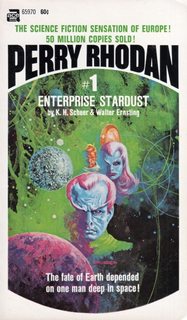 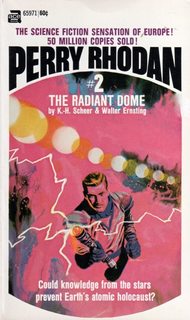 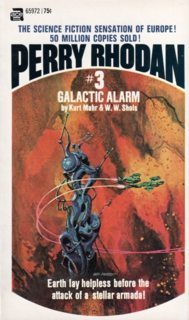 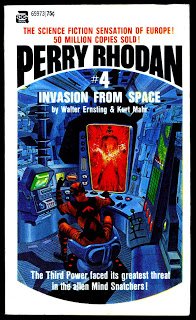 11
90's military sci-fi book series: rifle firing “flechette” rounds, grenade launchers as a standard weapon
16
Looking for an old story where humans conceal their newly-discovered psychic abilities from alien visitors
15
Novel featuring a baseball bat and a talking duck
17
Fantasy series a boy who finds a magic ring which allows him to find other rings
12
Science fiction novel with forced sex change
10
Sci-fi novel with lizard people running the government
5
Old story about a man whose personal gravity is reversed by a lightning strike