Is the D&D 5e magic item “Ioun stone” derived from the magic of Mandor from Zelazny's “Amber”?

Background:
So I just learned about the "Ioun stone of Intellect".

In action, it is described as:

When you use an action to toss one of these stones into the air, the stone orbits your head at a distance of 1d3 feet and confers a benefit to you.

A number, potentially a larger one, of years ago I read Zelazny's works about Corwin and Merlin. In them a character from the Courts of Chaos, Mandor, has magic centered around these balls that orbit and do stuff. He shows up in Knight of Shadows and Prince of Chaos.

Question
To what degree are the Ioun stones derived from Mandor's magic in Amber?

Variations on this, that would count as valid answers, can include:

Ioun stones are specifically derived from the later Dying Earth stories, featuring Rhialto the Marvelous, by Jack Vance. In the first two Rhialto stories, the IOUN Stones are merely powerful items that Rhialto and the other wizards of his time covet. However, the last story, “Morreion,” deals specifically with the source of the IOUN Stones. They are apparently harvested from the interior of a neutron star that has drifted to the very edge of the universe, where a black wall of “NOTHING” disintegrates anything it touches. As the neutron star brushes against NOTHING, its exterior is cut away, revealing the IOUN-Stone-laden interior, which can be harvested.

This is also covered in this RPG Stack Exchange question. The stones first appeared in The Strategic Review, vol.1, no. 4, published in 1975. (Thanks to Daniel R. Collins for tracking down the correct reference and editing that answer to reflect it.) Note that the first book in the second cycle of Amber novels was not published until 1985, while the Dungeons & Dragons ioun stones are about a decade older.

It's highly unlikely. Ioun Stones (in D&D) date from at least as early as 1979, in the original Advanced Dungeons & Dragons Dungeon Master's Guide, while the first of the second set of Amber novels, Trumps of Doom, featuring Merlin didn't come out until 1985.

Ioun Stones: There are 14 sorts of useful ioun stones. These magical stones always float in the air and must be within 3' of their owner to be efficacious. The new possessor of the stones must hold each and then release it, so it takes up a circling orbit, whirling and trailing, circling at 1' to 3' radius of his or her head. Thereafter, they must be grasped or netted to separate them from their owner. The owner may voluntarily seize and stow the stones (at night, for example) to keep them safe. He or she would of course lose the benefits during that time. 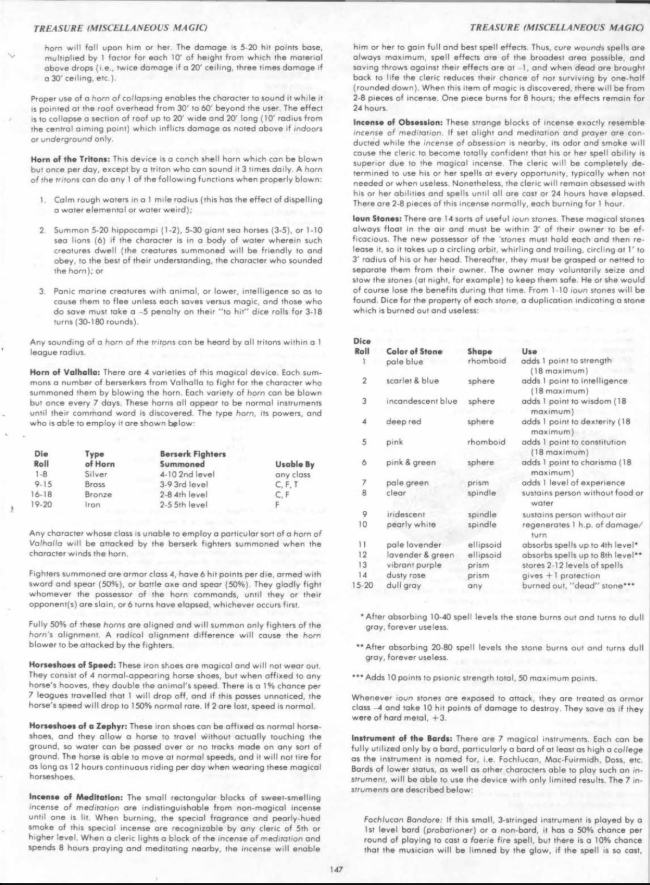 The Ioun Stone comes from Jack Vance's Dying Earth series, which is where the "fire and forget" spell casting of D&D came from too, as well as some of the spells such as prismatic spray. The stones are harvested from the core of neutron stars that are being sliced away by the Nothing at the edge of the universe and are therefore rare and difficult to obtain. Their origin is dealt with in the story "Morreion" in the collection Rhialto the Marvelous.

They were introduced in Issue #1 of Strategic Review (no author given, although there is a reference to Vance approving the design/inclusion and I know he and Gygax corresponded) and first made their way into the rulebooks with the original DMG, as far as I can see.

7
Did the Pattern and the Logrus come from the same source?
17
Did Zelazny give a reason for using the name “Amber”?
10
Where can I find any recording of Roger Zelazny's voice on the Internet?
4
How exactly do shadows work in The Chronicles of Amber?
10
What did the Pattern of Amber look like?
2
Why not to simply take some guns from the Shadow Earth and kill Eric?
4
What is the life expectancy of an Amber prince/king?
22
Why do matches work but guns don't fire in the city of Amber?
8
What is the significance of 'The Road Less Travelled' and the real Amber?
23
What does this line mean in Zelazny's The Courts of Chaos?