HP Lovecraft only wrote 1 or 2 novels, most of his works are short stories and novellas. I believe Lovecraft wrote in this manner because he used to write for the pulp magazines of the time (early 20th century).

As far as the order, I don't know that there is a particular order because the stories often have little to do with one another (other than featuring insanity, profound horror, and usually a timeless unstoppable evil entity). Though there are some references to the same dark gods and New England locations in some stories. The Necronomicon is a collection of most of his best stories, that's not a bad place to start. I could recommend some good stories, but not a particular order that would have any relevance. 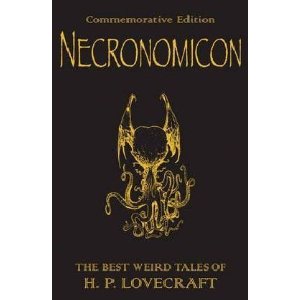 I would recommend reading them in pretty much the order he wrote them. While his stories all stand alone, Lovecraft's later tales do refer to characters and incidents from earlier ones; he even went so far as to have characters re-appear later (Richard Upton Pickman of "Pickman's Model" has a minor but important part in the later "The Dream-Quest of Unknown Kadath"; the narrator of "At the Mountains of Madness" shows up briefly in "The Shadow Out of Time"). Parts of "The Thing on the Doorstep" will make more sense if you've first read "The Shadow Over Innsmouth".

You can find a chronological list of his work at http://www.hplovecraft.com/writings/fiction/chrono.asp.

Reading everything Lovecraft wrote might not really be necessary, though. I don't find much value in his writings before 1920; and he did not reach his peak until 1926 ("The Call of Cthulhu", "Pickman's Model", and "The Silver Key" all date to that year, and much of "The Dream-Quest of Unknown Kadath" does as well). It wouldn't be entirely wrong to read everything he wrote from 1926 on, while picking and choosing among the earlier stories. But if you do, I would recommend reading all of the following pre-Cthulhu tales:

"The Statement of Randolph Carter", which introduces Lovecraft's alter-ego Randolph Carter "The Terrible Old Man", a rare amusing tale from the horror virtuoso "The Picture in the House"; I think the reference to Arkham in this story was the first "The Moon Bog" "The Hound" "The Festival" "The Shunned House" "The Horror at Red Hook"

Several of Lovecraft's other early '20s stories also repay reading, but I think anybody wanting to get a handle on Lovecraft should make a point of these.

The Cthulu Chick recently put together an eBook of the complete works of Lovecraft. This may be worth checking out!

The order she chose:

Let me shed a little light on this discussion thread.

Technically, Lovecraft only wrote one novel: The Case of Charles Dexter Ward. At The Mountains of Madness, The Shadow Over Innsmouth, A Shadow Out of Time, etc., all of them are technically novellas.

If you want to thoroughly enjoy Lovecraft's writing, in my opinion, you should purchase two books: Necronomicon: The Best Weird Tales of H.P. Lovecraft and Eldritch Tales: A Miscellany of the Macabre. Both books encompass 99.99% of Lovecraft's fictional work, including a handful of collaborations with other of HPL's contemporaries.

The reality is, coming straight from the mouth of the Father of Gothic Horror himself, that NONE of his stories are connected. PERIOD. He simply used his "mythos" as a backdrop for his stories. And make no mistake; he was selling these stores simply to put food on the table. He simply used the same names and themes OVER AND OVER again.

...if you'd like to enjoy these stories in the sense that I personally do, read the stories out of the sequence they are collected in, and read them in BIBLIOGRAPHICAL ORDER.

HPL's writing, critically, can be divided into three sets, or "cycles":

Occasionally, all three of these cycles may loosely overlap and interconnect, but unintentionally by the author. All three "cycles" were written in the order previously described.

Now, if you want to have a little extra fun with his writing, try reading this: the "Simon" Necronomicon; a fictional grimoire published in the late '70's, written by an unknown author, claiming that the writings of HPL were subconscious manifestations of the writings of Aleister Crowley. The book is basically a fictitious version of the Necronomicon depicted in HPL's writing. Complete bullshit, but fun to read.

You could read the stories in their fictional chronological order.

Many of Lovecraft's stories, especially the better ones, have dates of fictional events and you might be able to find a list of those dates before reading the stories.

It has been pointed out, for example, that the fictional dates in "The Dunwich Horror" and "Whisperer in darkness" overlap and that the protagonists of the two stories could have passed each other in the Arkham train station while on their quests.

Another order would be to read the stories in increasing order of quality, saving the best for last. I consider the best Lovecraft stories to be "The Whisperer in Darkness", "The Shadow out of Timr" and "At the Mountains of Madness", but your Lovecraftian adviser might have other favorites.

My recommendation is that you read his original works first, then the revisions, then finally any of the other members of his circle(s).

The reason to do this is to understand how others extended or interpreted his work, rather than mistaking their additions as original HPL. HPL encouraged other writers to adopt elements of his fiction, and he also borrowed from others - with free re-interpretation. Many stories are interconnected by the reuse of specific objects (forbidden books like The Necronomicon, aliens such as Cthulhu), and fictional places (Arkham, Dunwich, Kingsport, etc).

Since you are specifically interested in Cthulhu, then start with The Call of Cthulhu.

Not the answer you're looking for? Browse other questions tagged suggested-order h-p-lovecraft cthulhu-mythos or ask your own question.

8
In what order should I read the 'extended' Cthulhu Mythos?
21
How closely does our current image of Cthulhu match HP Lovecraft's description?
16
Cthulhu Mythos: How does the cult recruit people, if at all?
11
Did Lovecraft ever explicitly mention any enemies of the Cthulhu?
18
What works did Lovecraft and his "Cthulhu Mythos" draw from?
3
Is there an intentional pun in this quote from the Necronomicon?
6
Relationship of Nyarlathotep and Deep Ones