I’m hoping someone can identify a short anthology of sci-fi stories I read as a fourth or fifth-grader, around 1971. It was probably published specifically for younger readers.

I’m certain it included “The Last Command” by Keith Laumer and “Puppet Show” by Fredric Brown. It’s probably where I read “Of Missing Persons” by Jack Finney as well.

This might have also been where I discovered Heinlein’s “The Roads Must Roll”, but I’m not sure about this one at all.

Although the stories in it obviously pre-date the actual book, I’m certain the book would have be purchased new (probably from a drug-store book rack) in the early seventies.

It could well be "Tales of Time and Space", published in 1969. It has all the stories you list (except for "The Roads Must Roll") and five others, in agreement with your memory. The time-frame is about right too. Does the cover jog your memory? 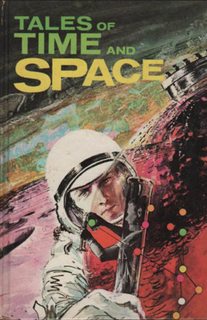