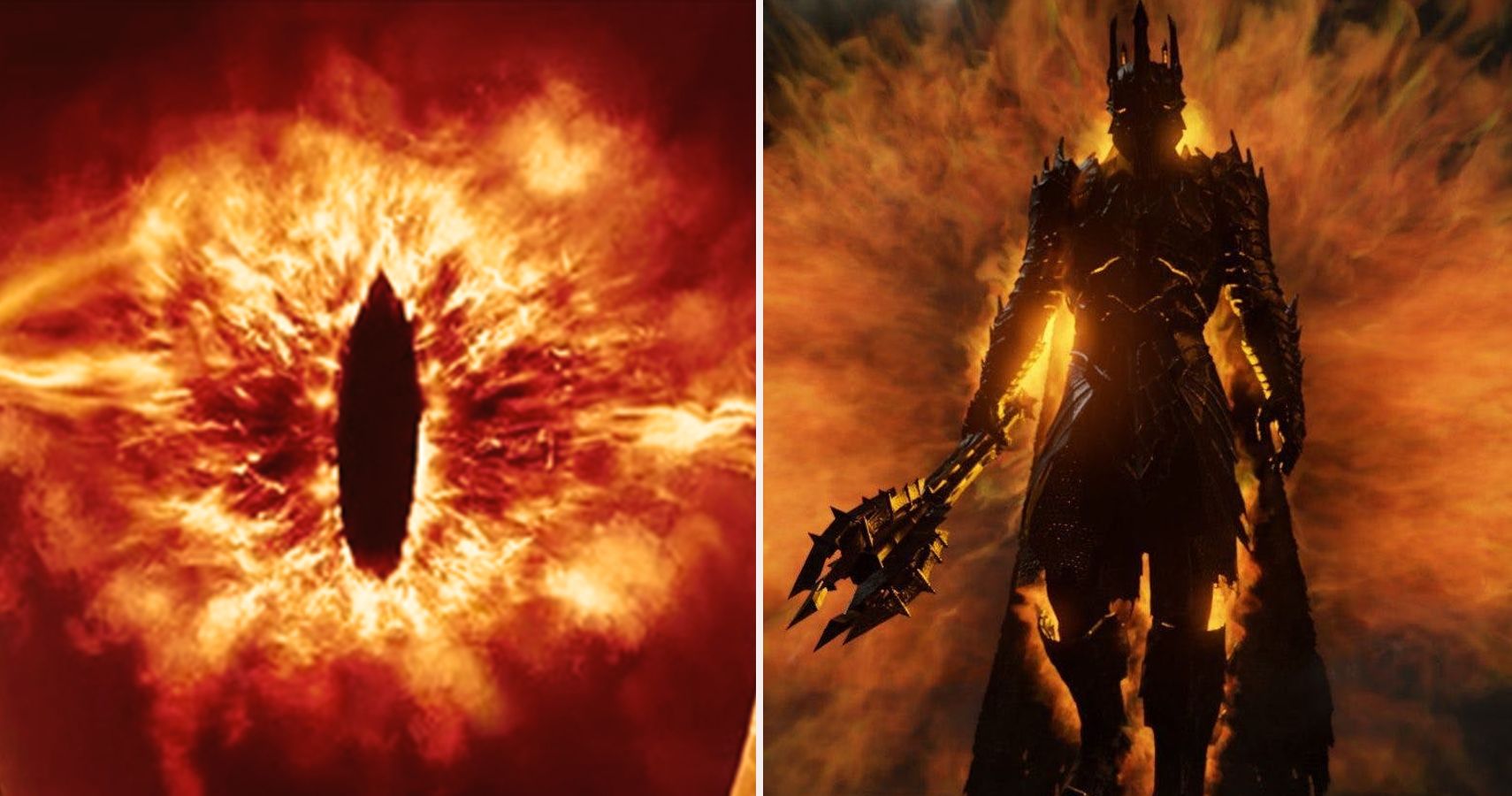 But, do the books ever describe what he actually looks like? I found a diagram by Tolkien himself: 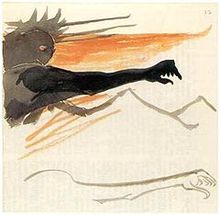 But this looks too... vague? And I don't know whether he was ever intent on continuing with this one as the official look for the great villain.

I just started reading Fellowship, completed half of it, when I was informed that everything in the movies is not accurately modelled after the book. And I know for a fact that the fiery eye was just imagined by Peter Jackson for the movies. So, is the Sauron seen in the movie a correct description? Is there a description at all? And if there is, how do the books describe Sauron?

Sauron was an Ainu, a sort of angelic spirit that existed long before the world was created. Many of the Ainur entered the world when it was made. Sauron was the greatest of the Ainur who were corrupted by Morgoth, the first Dark Lord, and was his greatest servant during the countless millennia of the Eldar Days before the Sun and the Moon were created.

The Ainur were spirits and had no physical bodies, but could make physical bodies for themselves as easily as humans can put on clothing. However, when evil Ainur inhabited the same bodies for decades, and centuries, and millennia, their ability to create new bodies weakened or even vanished.

The normal form of body for an Ainu to make resembled a human body, but usually larger. But an Ainu could make any form of body it wanted to.

The tale of Lúthien during the First Age of the Sun tells how when Sauron had Beren imprisoned in a fortress, Lúthien and Huan the Hound came to rescue him, and Sauron turned himself into a werewolf to fight Huan, since it was foretold that Huan would only be killed by the greatest werewolf ever. But Huan won, and Sauron surrendered the fortress to Lúthien, and then turned into a giant vampire bat and flew away.

The forces of Morgoth were defeated the War of Wraith and the Great Battle at the end of the First Age. Ancalagon the Black fell upon the towers of Thangordrim and ruined them, and Morgoth's realm of Angband was destroyed. The creatures of Morgoth, orcs, and trolls, and dragons, and balrogs, and the evil Men who allied with them, were all killed, or fled in terror. The powers unleashed by the Host of Valinor against Angband were so great that the land of Beleriand sank beneath the sea in ruin.

Sauron fled and hid for a long time during the Second Age, before seeking to gather evil creatures and conquer Middle-Earth. Sauron used a fair looking form when he taught the Elven smiths how to make rings of power, but Sauron secretly made the One Ring to rule them all. After millennia of history, Ar-Pharazôn the Golden, King of Númenór, came to Middle-earth with a vast army. Sauron, still in his fair form, was taken as a prisoner to Númenór, where he corrupted the king and the people into worshiping Morgoth.

Sauron was killed by the Downfall of Númenór, but his spirit returned to Middle-earth and to his land of Mordor, carrying the One Ring with it.

“But Sauron was not of mortal flesh, and though he was robbed now of that shape in which he had wrought so great an evil, so that he could never again appear fair to the eyes of Men, yet his spirit arose out of the deep and passed as a shadow and a black wind over the sea, and came back to Middle-earth and to Mordor that was his home. There he took up again his great Ring in Barad-dûr, and dwelt there, dark and silent, until he wrought himself a new guise, an image of malice and hatred made visible; and the Eye of Sauron the Terrible few could endure.” ― J.R.R. Tolkien, The Silmarillion

Sauron made a new body for himself, but it was hideous, since he could no longer make a fair form. After a century, Sauron attacked the Númenórean exiles in Middle-earth. The Last Alliance of Elves and Men was formed by Gil-galad, King of the Noldorin Elves in Middle-earth, and Elendil the Tall, High King of the Númenóreans in exile in Middle-earth. The Last Alliance defeated Sauron in the months-long Battle of Dagorlad and broke into Mordor to besiege Sauron in his super fortress, the Barad-dûr.

In The Fellowship of the Ring, Book II, chapter 2, "the Council of Elrond", Elrond told the story of the Last Alliance.

Thereupon Elrond paused for a while and sighed. "I remember well the splendor of their banners," He said. "It recalled to me the glory of the Eldar Days and the hosts of Beleriand, so many great princes and captains were assembled. Yet not so many, not so fair, as when Thangordrim was broken, and the Elves deemed that evil was ended forever, and it was not so."

After being besieged for seven years in Barad-dûr, Sauron broke out with a small group, headed for Mount Doom where he forged the One Ring. But Sauron's followers were killed, and on the slopes of Mount Doom Sauron fought Gil-galad and Elendil. Sauron was killed, but Gil-galad and Elendil also died. Elendil's sword Narsil broke beneath him as he fell. This account puts a limit to how superhumanly large and strong Sauron's body was, because he had to be small and weak enough that he could possibly be killed by two super warriors like Gil-galad and Elendil. Elendil's son Isildur cut the One Ring and its finger off of Sauron's body with the shards of Narsil.

Later in "The Council of Elrond", Gandalf describes how he investigated Bilbo and Frodo's ring, discovering that it was the One Ring. Gandalf found a description of the One Ring written by Isildur in the records of Gondor at Minas Tirith, and quote from it how the writing on the One Ring was fading:

...The Ring misseth, maybe, the heat of Sauron's hand, which was black and yet burned like fire, and so Gil-galad was destroyed; and maybe were the gold made hot again, the writing would be refreshed. But for my part I will risk no hurt to this thing: of all works of Sauron the only fair. It is precious to me, though I buy it with great pain.

So Sauron's body was black and yet burning hot.

After Sauron was killed at the end of the Second Age it took him a long time to recover. His spirit became active about a thousand years into the Third Age, encouraging creatures of evil to gather and attack the free peoples of Middle-earth. Nobody knows how many decades, or centuries, or millennia, it took Sauron to make a new body again.

Sauron built a fortress in southern Mirkwood, Dol Guldur, and possibly the walls were to protect his new body from being killed by his enemies. But maybe the fortress was to protect the evil creatures gathered there to serve Sauron, and he didn't have a physical body yet.

Sauron did eventually make a physical body for himself an unspecified period of time before the end of the Third Age.

In The Two Towers Book IV, Chapter, Gollum is telling Frodo and Sam about the route into Mordor that goes by Minas Ithil, which was renamed Minas Morgul.

"That would be Minas Ithil that Isildur the son of Elendil built," said Frodo. "It was Isildur who cut off the finger of the Enemy."

"Yes, he has only four on the Black Hand, but they are enough." said Gollum shuddering. "And He hated Isildur's city."

And it is commonly believed that Gollum was interrogated and tortured by Sauron himself when he was captured in Mordor, and thus that Gollum had seen the Black Hand and the rest of Sauron with his own eyes. Thus it seems likely that Sauron's latest body was also black and presumably hot as fire, and that Sauron was unable to make a ring finger to replace the one Isildur cut off.

If the games Middle-earth: Shadow of war/Shadow of Mordor is considered canon. It seems to indicate that Sauron has some shapeshifting abilities. His race is identified as Ainur, which is a race of immortal spirits.

Sauron takes different appearances at different times throughout the ages.

To Celebrimbor (the ring maker), Sauron takes the appearance and identity of Annatar (an Elf of similar heritage to Celebrimbor). This appearance used purely to trick Celebrimbor to forge the ring of power. 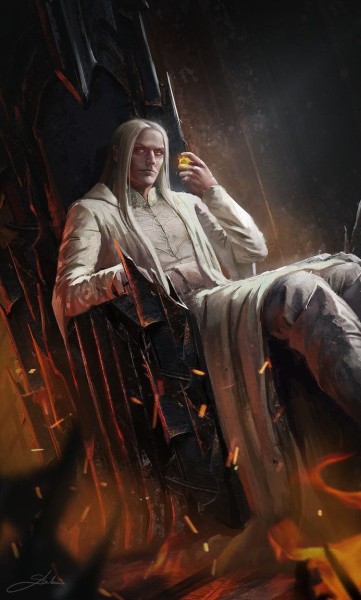 85
Was the "Eye of Sauron" Sauron's actual physical form?
64
How well does Shadow of Mordor fit into Middle-earth canon?
20
How Big Is the Eye of Sauron?
1
What is Sauron's true appearance?

15
What does Morgoth look like?
13
What does Gimli's axe look like?
39
Did J.R.R. Tolkien ever write a deeper connection between The Hobbit & The Lord of the Rings: The Fellowship of the Ring?
17
Do the Lord of the Rings movies portray Faramir in a far more negative light than the books do? If so, why?
6
Did George Lucas ever suggest that he was influenced or inspired by Tolkien?
32
What did Aragorn's crown look like?
5
Has Aragorn ever expressed fear?
5
Did Sauron have a sword?