Sci fi anthology with a story about a tree being, and an enslaved combat robot

I am looking for 2 Sci-Fi short stories that may have been in the same anthology book. I read the book over 20 years ago and the book was old at the time so I can’t be precise about when the stories were written.

The First one is about a tree, here is what I remember: The story starts of telling two threads, one about the tree organism, and the other thread about a thin weak crew member on a space ship. The tree recounts how it has a has a very long life cycle; it starts off as being a mobile entity, then it stays in once spot and turns into a tree The man recounts how he is bullied by one (or more) of the crew The tree recounts how it has stood in this one place for a long time and how a storm has caused it to fall over and it is dying. The man’s ship lands on the planet, and there is some bullying, and the man finds himself by the fallen-down tree which reached out to him and I think the man agrees to be the tree's Successor. The tree "makes" the man strong and the story ends with the man having beaten his bully and contemplating what the future holds with hundreds of years now to explore the universe.

The second one is about a robot/war machine, here is what I remember: There is a man in a laboratory. He has several “old” enemy war robots left over from a war some years ago. The robots were sentient, and somehow they have had their sentience disconnected but not turned off (although the man in the laboratory doesn't realize this I think) The man in a laboratory is using the robots like remote control automatons, and at some point he gets berated or warned by a collage or superior that these were dangerous. The man in a laboratory made some assurances that the machines are safe. The Robot is not “dead” and is dormant but still conscious to some extent and remembering the past. [I remember] a bit where the robot remembers a dash across the battle field and a victory, after which it/he is presented with a medal that it/he welds to itself Something goes wrong in the laboratory and the robot regains control of itself. The man in a laboratory tried to incapacitate the robot by throwing a copper mesh over it and trying to shock it with electricity but this just powered it up fully. I think the robot wakes the other robots The story ends with the robot calling home (which I think was another planet) and telling its masters it's functional.

The second story is probably "Combat Unit" (1960) by Keith Laumer. A Bolo XXXI combat unit wakes up and discovers that it and its companions have had their weapons stripped and (primitively) outfitted as work vehicles. Of course they break free, and go outdoors to await relief. You can read the story on the Baen website.

Given that identification, and the almost certain identification of "Hybrid" as the other story, you most likely read the collection Nine by Laumer (1967). (There is only 1 other collection with both, and it looks obscure.) 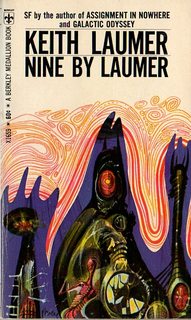 @user14111 points out that both stories also appeared in the 1991 Baen collection Alien Minds.

11
What Sci-Fi book about robot domination is this?
14
Science Fiction short story(-ies) about a person who is arrested by a robot for being outside at night
4
Short story about mining robot fighting in the arena
21
Anthology book with story about robotic bombers
3
Animated film where protagonists travel to the future and save a robot-enslaved humanity
12
Old short story where robot servant/assistant murders human being for lubricants?
6
Looking for sci-fi short story anthology with a particular story of an Earth/Mars war children inheriting the surface
12
Short Story - Man lives in isolation in a compound, plays tennis against a robot, arranges meeting with a woman
10
80's (or earlier) short stories book: tiny visitors in a house inside a house, horses appearing upon wishes, and a story about getting lighter