Many years ago I read a story - it may have been a novel, or a short story in a compilation - that included travel of the principal characters to an alternate universe, where many species of animals had been elevated (possibly by genetic manipulation?) to sentience, and were members of the alternate worlds society. One of the animals was a dog, who had achieved sentience with the assistance of computer implants in his brain, necessary because dogs were not able to achieve sentience biologically, as the other animals did.

Another part of the story that has stuck with me is a reference to "clicks" (or "klicks") while the characters were traveling in a flying craft, followed by the comment "and I'm not talking about ..." and some reference to a measure of speed (maybe k/h?).

If the "dog" was a coyote called "G. Howell Nahuatl" and the crew were preparing for an operation called "Sodde Lydfe" (or something like that) then this is probably Tom Paine Maru (1984) by L. Neil Smith.

The crew of the titular ship (and the rest of the "Tom fleet" and "Bob fleet") were engaged in planetary political interventions and engineering to "free" oppressed people in different universes. (The "Tom fleet" and the "Bob fleet" operated in separate universes, though I don't recall how that worked being investigated in any detail.)

Naturally the viewpoint character is an outsider, an enlisted soldier called "Whitey O'Thraight" (or YD-038), so the rest of the crew get to explain the glories of their system in detail to him. Substantial chunks of the story read like radical libertarian political screeds.

The detail that sticks and fits with your recollection is that the coyote needed cybernetic upgrades to function as a citizen (and even talk) while the uplifted chimps/gorillas/whatever didn't.

This seems to be the only cover it was published with: 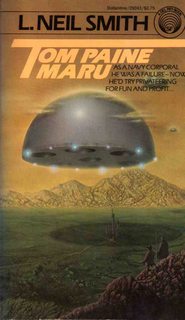 Not the answer you're looking for? Browse other questions tagged story-identification parallel-universe animals or ask your own question.

11
Is there any evidence that using alternate universe/timeline in a franchise hurts/helps it?
32
Is there a difference between a parallel universe and an alternate universe?
3
Looking for a sci-fi book series that starts with a girl who tries to commit suicide and is pulled into an alternate universe
7
What's this post-apocalyptic book with intelligent animals?
14
Identify a horror sci-fi story where a mad scientist creates grotesque creatures by combining genes from human and animals