Which story is about an alien race surviving the approach of hot companion star in elliptical orbit?

Probably from the 80s or 90s. USA paperback. Cover has a human and a humanoid alien wearing back packs (hiking across a desert type terrain) who are standing on a pile of rocks or rocky prominence. Human on the top, alien a couple feet behind him. (clearly looking for the path to get out of desert)

Humans have landed on planet and made contact with the aliens, learning about them and their culture.

The planet is in either a highly elliptical orbit or has a companion star in an elliptical orbit. Pretty sure it's a companion star, as if I recall correctly the planet is going to experience a hot period for decades. The humans are trying to figure out how the current plant and animal life could possibly survive, as the surface temperature is going to increase by about 200-300 degrees. The companion star has an orbit of centuries and the humans can't figure out how aliens have progressed to their current level (medieval or 18th century equivalent) in only a few hundred years.

Eventually the human scientists put samples of plant and animal life in an aquarium and raise the temperature. Everything dies, all water boils off and even the atmosphere in the aquarium changes, but from the plants and animal remains, spores? (seeds? pods?) erupt and new forms of life capable of handling the high temperature emerge.

The humans discover there are deep ice caves that some of the aliens will seal themselves in and after the companion star recedes, will emerge and start training the next generation of humanoid aliens. 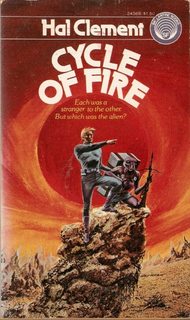 The human crashes in the desert, finds the alien and helps him find water. The alien is trying to get to the "Ice Ramparts" where his people are hiding from the heat.

85
Short story where human explorers accidentally blind an alien race
7
Trying to find story, with an alien race who was digging tunnels to change planet's rotation and eventually orbit
41
Short story about alien invasion with a twist.
8
Identify story about girl on alien planet with western feel
17
Trying to remember a book about a human male travelling to alien planet
15
Humans Stumble Upon Low-Tech Aliens
25
Story or novel about elephantine aliens – NOT the Fithp!