Looking for a book about talking dragons with no humans

When I was a kid I remember going to a relative's house and reading the beginning of a book about warring factions of Dragons. I was not able to finish before the weekend visit was over. I've never found that book and the relative is clueless. Here's what I can remember about the book:

This book was about dragons at war with each other. They could speak and carry on dialog between each other. They had civilizations/societies.
There were at least two warring factions of dragons. I have no recollection as to wether they came from "the same" society, or completely different worlds, etc.

If my memory is right, there were no humans - it was only dragons!

And, if I remember correctly it was a series and this was the first book.
The dragons on the dust cover were flying/fighting in air, one was dark/blue-ish and one was a red color. Very traditional as far as dragons were concerned, similar to GOT - they had distinct scales, not smooth-skin; very mean looking, very "pointy" - everything looked sharp.
I can't confidently say whether they were Dragons or Wyverns.
The dust cover was semi-new looking - to me that means it was likely printed in the 80s or after - but I have no idea if this was a "new" book, or a re-printed one. I would be speculating to say either way. If I had to guess I'd say it was from the later 80s/early 90s.
I read parts of it c.1998-2000 in the US.
For some reason I feel like there was a "space" aspect as if the different factions were from "different planets" but I am less sure about this than anything else. (This is by far the least confident detail.) It's been twenty years and I can't remember enough to track this thing down. I try to search every now and then but I never seem to find it.

Any help is greatly appreciated. Thanks!

The Dragons at War, edited by Margaret Weis and Tracy Hickman, published in 1985 is an anthology of stories set in the Dragonlance Universe.

I can't find any indication that the stories do not feature humans, but the time period and cover seem to match your description.

Dragons, the true children of Krynn, are power incarnate, and they know it. They come in all guises and forms. Their personalities are as varied as thier colors. Their magical abilities are virtually unlimited. And nothing is so terrifying as dragons on the wing.

In this collection, a follow-up to the popular The Dragons of Krynn anthology, Dragonlance creators, Margaret Weis and Tracy Hickman serve up a fantastical array of dragon tales featuring the motley races of Krynn and the deadliest creatres of the Dragonlance saga. 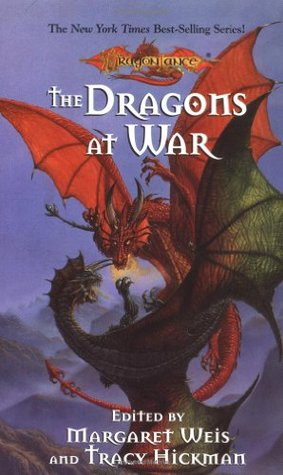 It may be this book:

There's a red and blue dragon fighting on the cover and it might not feature any humans. Hope this helps!

Not the answer you're looking for? Browse other questions tagged story-identification soft-sci-fi dragons or ask your own question.