I'm trying to identify a game I've played as a child, most likely on the NES. The time when I would have played this would likely fall in the 1992 - 1998 range. Sadly, I remember only a small part of it - the part that made it stand out to me at the time.

The main gameplay of the game was probably some RPG or hack and slash type, but between levels (areas? maps?) there was a town one could build. Unlocking space for building would require completing another level.

Unless my memory is mixing games, during the town-building one could fly over the town as a kind of angel figure.

Reminds me of a Super NES game called Actraiser. Are you sure you weren't thinking of a SNES game? 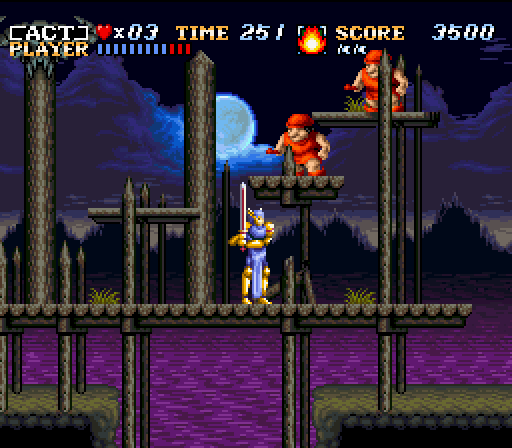 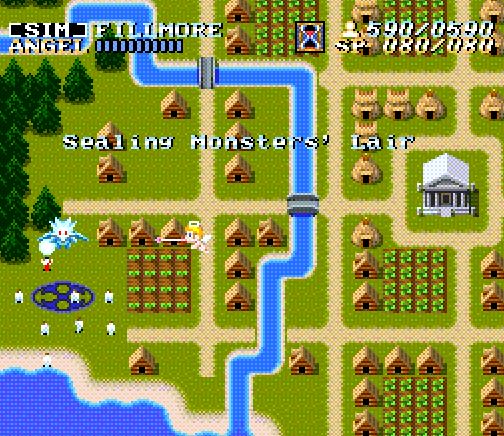 You play some kind of god that can come down to Earth to smite evil in a very personal way. You also guide a number of communities in developing their villages into towns, while helping them seal evil. Sometimes these communities find sacred artifacts that then become part of your inventory.

Every town has two levels attached to it. You have to complete both in order to allow a town to achieve its full potential.

In the town screenshot above, you can see a couple bridges. I remember you had to fight some monsters in a platform level so that villagers could reach some special area, and that's where they learned how to build bridges so you could expand to the other side of the river.

In the town building area, you control your assistant which happens to be an angel. The life meter has the word 'angel' written on its left. You can see the angel in the village screenshot, close to the plantation that is most to the left. I highlighted him in the screenshot below: 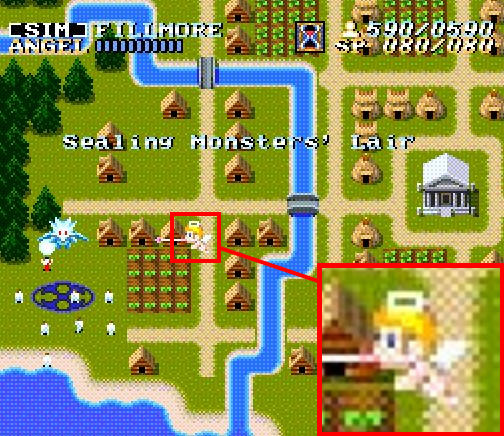 I thought you meant Soul Blazer, destroying a monster in a lair would bring someone in town back and thus your town would grow..

2
19th Century Children's TV Drama
7
Sci-fi strategy video game with a trailer involving an FTL drive test
8
Seeking a game like Hunt the Wumpus but with graphics, RPG elements, and a balrog
27
Creepy dinosaur pc game identification
4
90s (or earlier) computer game where a troll turns you into a frog
2
RPG with a rune that left a "brand" on you at the cost of HP damage
6
Shareware fantasy RPG from around 1993
10
NES Game Identification: Top down, green/jungle on cover and maybe title screen