What unit system does Middle-earth use?

I was just reading The Fellowship of the Ring, chapter 'The Ring Goes South' when I noticed this:

"...But your road and our road lie together for many hundreds of miles." - Aragorn

I don't know how may times this may have come up, it is possible I may have breezed through it several time while reading the book, but this was the first time I noticed it.

Now, I know Middle-earth uses the same calendar as normal life. Months are described as October, November etc. Even the seasons have the same names. But I know the year convention is not as the events till now take place in the year 3018 (I found this in the Appendix to The Return of the King, as I have a volume containing all three books.)

I don't know how the year convention works, but guessing by the way people speak and the way they interact and the whole setting of the story itself, I am guessing the events in this book took quite a long time before imperial units were even invented. I mean, this is a time when elves existed and there was a huge war against an evil cosmic creature, so even in-universe this must be pretty ancient.

What unit system does Middle-earth use? Was the miles reference just something Tolkien left in for readers to apprehend, or was it actually the imperial system that Middle-earth uses? I don't think the former is much plausible, because Tolkien was the person who created an entire universe with spectacular detail, right form languages to calendars. So, what unit system do people use in Middle-earth?

In the appendix titled "Númenórean Linear Measures" of the Disaster of the Gladden Fields chapter of Unfinished Tales, Tolkien goes into some detail about what a league is, and how he 'translates' the units from the fictional ancient writings (probably Translations from the Elvish, which were part of Bilbo's Red Book of Westmarch) he's supposed to be translating, into modern-day units.

Measures of distance are converted as nearly as possible into modern terms. [...] five thousand rangar (full paces) made a lár, which was very nearly three of our miles. [...] The Númenórean ranga was slightly longer than our yard, approximately thirty-eight inches, owing to their greater stature. Therefore five thousand rangar would be almost exactly the equivalent of 5280 yards, our 'league': 5277 yards.

As far as I know, Tolkien never addressed this explicitly, but he did say that he treated the whole book as a 'translation' from the original languages and in the Appendix to LotR he discusses (much too long to quote!) some aspects of the translation (language, names, and the calendar) in some detail, making it clear that the original was different. Small difference in some cases (Middle-earth's days, seasons and years are the same length as ours), big differences in others (language, for instance).

It would be entirely consistent if he did the same for measures: The various peoples and societies of Middle-earth each had their ways of measuring distance (and weight and other things), but the translator converted them to units intelligible to us.

So the answer is that we just don't know.

Hobbits in Middle-earth use a unit system based on their physical properties, with units ranging from the length of their toe nails to the distance they can walk in a day.

The following comes from some notes Tolkien made on the back of a menu card for a faculty dinner he attended in the early 1950s (during the time period where he was working on The Lord of the Rings.) The card is currently in Marquette University Libraries, Milwaukee, MS. Tolkien MSS-4/2/19. It was reproduced two years ago in Tolkien: Maker of Middle-earth, the tie-in publication to the Oxford exhibition of the same name. 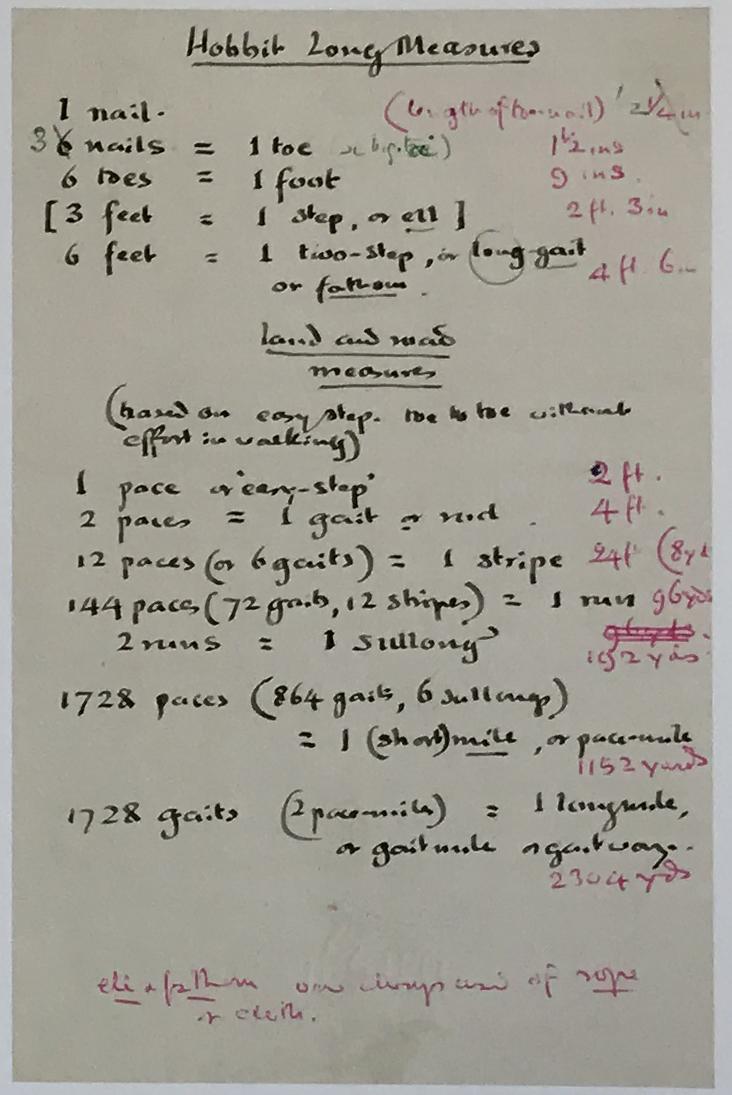 I haven't seen a transcription published anywhere, so I'll attempt one here myself:

ell and fathom are always used of rope or cloth.

The above is all about Hobbit units. Tolkien also discussed Numenorean units in a note associated with some late writings concerning Isildur's Death ("The Disaster of the Gladden Fields"). It has been published by Christopher Tolkien in Unfinished Tales of Numenor and Middle-earth in 1980.) Note that unlike the information about Hobbit units, this wasn't written until some years after The Lord of the Rings had already been published.

In Númenórean reckoning (which was decimal) five thousand rangar (full paces) made a lár, which was very nearly three of our miles. Lár meant "pause," because except in forced marches a brief halt was usually made after this distance had been covered. The Númenórean ranga was slightly longer than our yard, approximately thirty-eight inches, owing to their great stature. Therefore five thousand rangar would be almost exactly the equivalent of 5280 yards, our "league:" 5277 yards, two feet and four inches, supposing the equivalence to be exact.

As with my comment to an answer by @MarkOlsen to the question about where tea (i.e. the processed and dried leaves of the Camellia sinensis plant) comes from in the Shire:

Units of measure such as "miles" contemporary to Tolkien's writing, along with other Britishims present in his texts, might also be considered literary conceits akin to Tolkien's (explicitly noted) rendering of the Westron name 'Maura Labingi' as 'Frodo Baggins' for contemporary English language speakers. That is, perhaps Aragorn did not actually describe distances in units of miles, but had some other culturally-specific unit system for distance, and "miles" is just a free translation from Westron? (I.e. because many dozens, hundreds, or thousands of "smeþrû"1, or whatever, would be unintelligible to 20th century English readers.) So to speak directly to your question: Yes, (probably) "the miles reference [was] just something Tolkien left in for readers to apprehend."

(Aside: The use of free translation specific to Tolkien's narratives was hinted at by Vernor Vinge in A Deepness in the Sky I think...)

1 Completely made up gibberish syllables because I am not a philologist. :)

No one has mentioned yet that Samwise measures the length of the rope that the Elves of Lórien gave to him in "ells." This might be, like "league," the use of an antique and seldom-used English measurement for a Middle-earth equivalent. The ell used by Samwise is presumably the hobbit version of the Númenórean ranga in LAK's answer.

24
Where does the tea come from?