Did Dumbledore leave anything to Aberforth in his will?

In Harry Potter and the Deathly Hallows, Part I, Harry, Hermione and Ron are read out the now-deceased Dumbledore's will. It's later revealed in the subsequent movie that Dumbledore has a brother, Aberforth, who he was once estranged from but was on amicable terms with when he died, and that Aberforth is a member of the Order of the Phoenix.

It would be unnecessary (and presumably illegal) for the Minister to read the entirety of the will to the three, so it seems at least possible that Dumbledore left something to Aberforth in his will.

Did he? Is there any extra information on this from the books or other sources?

Not as far as we're aware. The will is discussed in the Deathly Hallows novel, mentioned in the tie-in Beedle the Bard book and seen, in part, in the Deathly Hallows, Part I film. None of these sources have any mention of any other individual recipients other than the golden trio who received a variety of seemingly whimsical objects (and a ruddy great magical sword)

That being said, the novel suggests that there are more personal bequests than just those mentioned to Harry, Hermione and Ron, so it's possible that he gave some of his estate to his friends and family.

‘If you were not very close to Dumbledore, how do you account for the fact that he remembered you in his will? He made exceptionally few personal bequests. The vast majority of his possessions – his private library, his magical instruments and other personal effects – were left to Hogwarts. Why do you think you were singled out?’

This similarity of outlook notwithstanding, it was a surprise to discover a set of notes on The Tales of Beedle the Bard among the many papers that Dumbledore left in his will to the Hogwarts Archives.

You can see the original (screen-used) prop here. There appear to be additional codicils but you can't read what's on the second page. It appears to be gibberish. 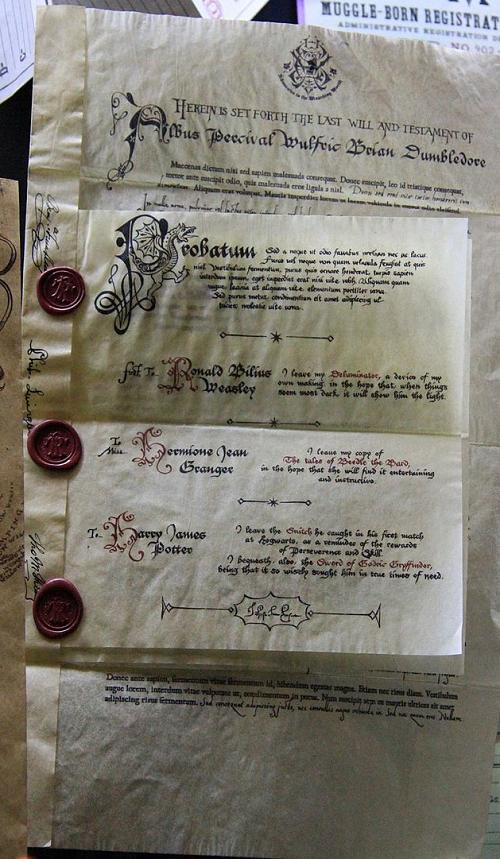