Hoping to identify a short story I read in a sci-fi anthology in the late 1980s: no character names, I'm afraid, but the plot was along these lines: a girl (probably!) lives in a "normal" world, what we'd identify as a late 20th century Earth setting, but she experiences glitches in her experience; what she doesn't know, and is only revealed at the end, is that Earth is now in a post-apocalyptic state, almost everyone is dead, and the last handful of survivors are using their remaining energy resources to power a fully immersive VR so that she can experience a regular childhood. the story closes with them all gathered around her in a wasteland, knowing that they'll have to wake her up eventually.

It was an English language anthology, part of a series in our local library's YA section. I'm afraid that I can't remember the name of the anthology series, but it might have been a single word + volume number as a title - like, "Space 4", but less obvious. I read heaps of similar short stories at the time, so it would be misleading to list others I recall, as I can't say for sure if they were part of the anthology.

They were a hardback collection, with vaguely futuristic artwork (citycapes, mostly).

Attaching a cover that is very similar to my memory of what the book looked like! 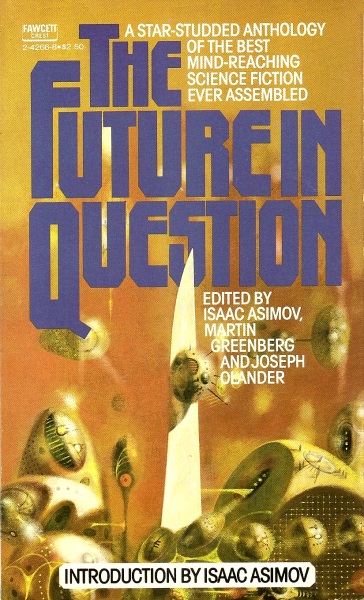 Although your story is from the 1980s, the premise is very similar to "Moongazer" by Marianne "Mari" Mancusi, published in 2007.

Skye Brown has it all: the cool job, the hot boyfriend, the apartment on New York's Upper West Side. Lately she can't enjoy any of it because she's having dreams of a post-apocalyptic world, of a bleak futuristic wasteland, of a struggle against oppression, and she's been told she's a Moongazer.

Not the answer you're looking for? Browse other questions tagged story-identification short-stories dystopia or ask your own question.

11
Short sci-fi story about a hellish, industrial isolated domed city, where people live in hypnosis to see it as beautiful

15
A short story about a girl remembering the day she got her brain implant
19
Short story about a woman who is about to leave on an interstellar trip to search for non-human intelligence
26
Short story where almost all men are infertile, female main character
10
A short story that was a "Conan the Barbarian" parody -- kill the sorcerer Reh, "rescue" the princess
15
Short story where an old man completely eliminates all trace of a young woman's existence
24
Short story, woman has something that directly stimulates the pleasure centers in the brain, man finds her
10
SF Short Story about resetting the world every day
7
Short post apocalyptic story about evil gang