How is Ozymandias so strong?

In the 2009 adaptation of Watchmen, Rorschach narrates about Adrian Veidt:

I cannot imagine a more dangerous opponent. Used to joke he was fast enough to catch a bullet. He could kill us both alone in the snow.

Rorshach believes this so much that he finishes and posts his journal to The New Frontiersman before leaving for Karnak, despite the fact that - in the movie at least - Rorschach is the most capable hand-to-hand fighter that we've seen fight.

We see Ozymandias outflank an assassin while dodging his bullets, and make it look effortless in the process.

And then we learn that:

...it was Veidt who hammered the Comedian in the opening scene and threw him out of the window to his death.

Ozymandias is consistently called the smartest man in the world, but from the above you would also be forgiven for thinking he was also the most superhuman (if we're no longer considering Dr. Manhattan human, which he himself obviously doesn't).

Where exactly does Ozymandias get this strength from? It's my impression that Dr. Manhattan is the only one of the Watchmen with true superpowers, but both what we've heard about Veidt and seen from him indicate otherwise.

According to Alan Moore, Ozymandias is the only person in the world who is capable of using 100% of his brain. This gives him unparalleled control over not just his mind, but also his body.

Adrian Veidt was Peter Cannon, Thunderbolt; I always quite liked Pete Morisi's Thunderbolt strip... there was something about the art style, almost bordering on kind of Alex Toth style, though it was never as good as Toth, but it sometimes had a pleasing sensibility and a nice design sense about it that I was quite taken by. And I quite like the idea of this character using the full 100% of his brain and sort of having complete physical and mental control. Adrian Veidt did grow directly out of the Peter Cannon, Thunderbolt character.

Peter Cannon [AKA Veidt] is about thirty-seven, but he also looks younger. In Captain Atom’s case this lack of age was due to his complete control over his body’s atomic structure, which would prevent any decay. In Cannon’s case, it’s simply because he’s a superb paragon of humanity in every detail, he has a flawless physique and is in peak condition all the time, and because he is able to use the full one hundred percent of his brain power, which gives him a certain amount of Fakir-like control over his bodily processes. Captain Atom is immortal. Peter Cannon, barring accident, might live to be about a hundred and fifty.

In-universe, Veidt trains relentlessly as a boy, becoming a superb fighter in response to being bullied and regularly beaten by his peers. 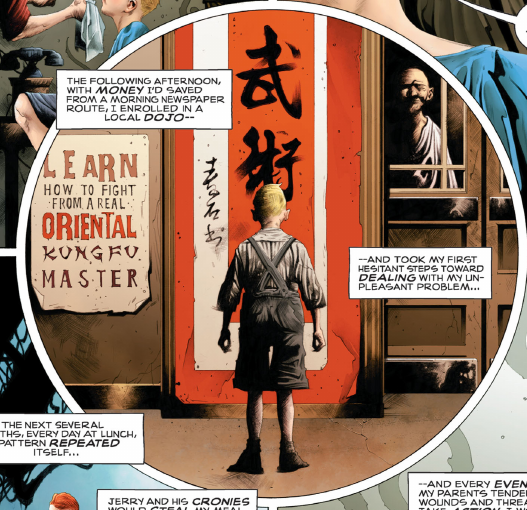 In the original books, Adrian Veidt attributes his own powers to training and discipline. An interview Veidt gave to Nova Express is included at the end of Chapter XI:

VEIDT: ... To answer your question, you get to be a superhero by believing in the hero within you and summoning him or her forth by an active will. Believing in yourself in your own potential is the first step to realizing that potential. ...

NOVA: You'll forgive me for saying so, but isn't that philosophy a little bit Norman Vincent Peale? That self-realization stuff? How exactly do you exploit the potential to the degree that you obviously have?

VEIDT: The disciplines of physical exercise, meditation and study aren't terribly esoteric. The means to attain a capability far beyond that of the so-called ordinary person are within reach of everyone, if their desire and will are strong enough. I have studied science, art, religion and a hundred different philosophies. Anyone could do as much. By applying what you learn and ordering your thoughts in an intelligent manner it is possible to accomplish almost anything. Possible for the "ordinary person." There's a notion I'd like to see buried: the ordinary person. Ridiculous. There is no ordinary person.

In addition, some introductory text for a self-improvement book sold by Veidt, on the "Veidt Method", is included at the end of Chapter X. It also claims that discipline and study can turn anyone into a superhero:

Our third and longest chapter presents a carefully coordinated series of physical and intellectual exercise systems which, if followed correctly, can turn YOU into a superhuman, fully in charge of your own destiny. All that is required is the desire for perfection and the will to achieve it. No special equipment or other hidden cash extras are necessary. The Veidt Method paves the way for a bright and hopeful future in which anyone can be a hero.

18
If Batman has such strong will power, why hasn't he been recruited by the Lantern corps?
5
How similar is Earth-2 to the DCnU's Earth-1?
15
How strong is Superman on Krypton?
12
Why did Ozymandias open his vivarium?
23
Why did Ozymandias think that the intrinsic field trick would work?
21
Why did Adrian Veidt choose such an obvious password?
49
How does Batman fit into the timeline of Watchmen?
8
Why didn't Ozymandias kill the Comedian with a gun, or a knife?