Does JKR have a reason to call Severus Snape, Snape?

I am currently re-reading Harry Potter in English as my first language is French. It appears that Severus Snape is translated into Severus Rogue in French.

With a little bit of research, I found out that even if his name is not translated in every translation of the books, it's still a pretty common thing. I'll take the Italian translation as an example which uses Severus Piton. While I understand the correlation between Snape and Piton, both kind of alluding to snakes, this is not obvious with the French version.

In French, "rogue" describe someone who is gloomy, arrogant and stiff. It's obvious that it's a good description of the character, but then again I can't find any good reason to go from Snape to Rogue as it's not even similar. And it's is no way close to snake related words or expressions.

So does Snape have a meaning in any dialect or former English or current English that could explain why JKR named him this way?

As far as I know, Rowling has never stated a particular meaning to "snape" that relates to the character, although the common theory is indeed that it sounds like "snake".

This article on translating Harry Potter into Yiddish mentions both the French and Italian translations in discussing how translation of the names is difficult because some are wordplay in-universe and others are out-of-universe puns.

One common question: What to do about names? Throughout the novels, Rowling either gives her characters traditional British monikers like Cornelius or Hermione—which have no equivalent in many foreign languages—or she chooses names that connote something about the character in question. Thus, the wizard Sirius Black is later revealed to possess the ability to transform into a black dog, as foreshadowed by his name’s reference to Sirius, the Dog Star.

As he examined prior foreign editions, Viswanath discovered that different translators had taken dramatically different approaches. “French went totally out there,” he said. “They renamed [Severus] Snape to ‘Rogue.’ In Italian they renamed him ‘Piton’ [snake]. French even changed the name of Hogwarts” to Poudlard, which means “bacon lice.” In his own work, Viswanath didn’t find such radical revisions necessary for the most part, because “Yiddish is a Germanic language, so the English sounds are not that foreign.” Thus, Harry’s classmate Neville Longbottom remained Longbottom, rather than “longtuchus.”

In some cases, however, it was necessary to rename characters to preserve Rowling’s intent, which is how Quidditch captain Oliver Wood became Oliver Holtz. In the novel, Harry is introduced to Wood by professor Minerva McGonagall after he demonstrates remarkable skill chasing another student in midair on a broomstick. Thinking he is about to be disciplined for breaking the rules, he misinterprets her meaning when she asks another teacher if she can “borrow Wood for a moment,” wondering “was wood a cane she was going to use on him?” Needless to say, this wordplay would not work unless Wood’s name referred to wood—or holtz—in Yiddish, and so Viswanath rebranded the character, even though he’d found that many “other languages don’t try to do it,” leaving readers somewhat confused.

I suspect that the French translation may have been riffing off of one definition of the Middle English word "snape", from Old Norse sneypa ("to outrage, dishonor, disgrace")

Given Snape's tendency to belittle those around him, it seems like an apropos word to use, and "Rogue" captures some of the same meaning of someone being a bit on the bad side, which is closer to the Old Norse origin. That said, I suspect this is more of a happy accident than intention.

"Snape" is a dialect word in most of Northern and Eastern England, with a wide range of meanings:

In one area (Lincolnshire) it also has the meaning of "to be foolish, silly, not quite right in the head".

I don't know if these dialect meanings extend from Northern England into Scotland, but several of them have some resonance with Snape's character and behaviour, though the French translator's "rogue" doesn't really match these attributes, and none of them have any reference to snakes.

Ref: English Dialect Dictionary online and personal knowledge from living in the area.

J.K. Rowling got the name "Snape" from an English village

In multiple interviews, starting as far back as 1999 (shortly after book three was published), J.K. Rowling said that the name Snape came from a location in Britain.

I take names from places too. Dursley is a place in Britain as is Snape.

I am a bit of a name freak. A lot of the names that I didn't invent come from maps. Snape is a place name in Britain.

Presenter: Super. That was a very popular question, as is this one that’s been sent in by X from Cardiff who would like to know, how you come up with all the fantastic names for the beasts and characters in HP.

JKR: Erm, I, I, kind of collect unusual names. You have to be very careful about telling me your name if you do have an unusual name because I'll probably put you in a book ... and I make a lot of the names up. But mostly maps. Maps are a great source for names ...

JKR: Yeah. Dursley and Dudley and Snape are all, erm, places I can't visit anymore obviously.

The first name "Severus", comes from a street sign in Clapham

Real Harry Potter inspiration alert: I walked past this sign every day on my way to work when I was living in Clapham . Much later - post-publication - I revisited the area & suddenly realised THIS was why 'Severus' had leapt into my head when thinking of a 1st name for Snape. 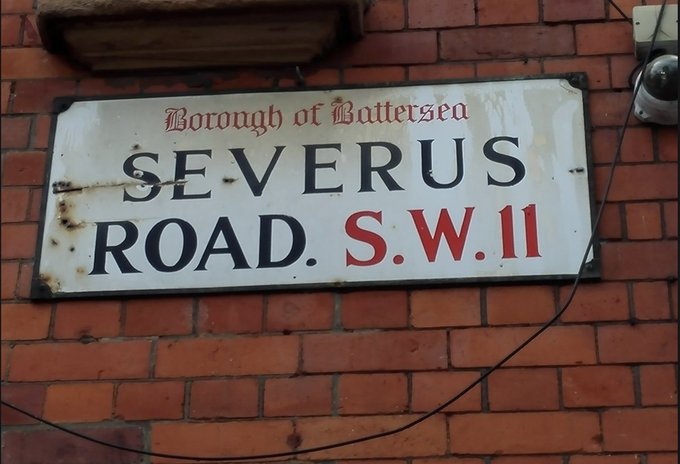 Although snape had a meaning in Middle English -- a meaning which derived not from Anglo-Saxon (a Germanic language), but from Old Norse (a Danish language) - that was five centuries ago, or more.

The French o/p deserves to be told, in plain terms, that the word has no meaning in Modern English.

The French reader might be interested to know that, in English, style is sometimes more important than meaning. Accordingly, the name "Severus Snape" has an additional implication: the aliteration, in using a name which has the letter 'S' begin both the first name and the surname, has an effect even though neither is a dictionary word -- the fact that the letter 's' recurs three times in that name makes it impossible to speak the name aloud without it sounding like a hiss, of a snake, that reproduces the 'sss' sound which snakes are said to make when hissing.

Thus, despite being just a name, i.e. with neither part of the name bearing a dictionary meaning, it nevertheless comes across as sounding like the hiss of a snake.

She got the name Snape from the village in Suffolk, which is 5 miles from Aldeburgh. It means an area of boggy, or marshy ground. That's exactly what it's like in the estuary of the River Alde. Probably even more so when the Anglo Saxons first settled the area.

The only other village called Snape is in North Yorkshire, but it's not likely to be the one she was referring to.

I believe that Snape originated from two words:

What's more, Severus is developed from the word "severe".

Rowling did a great job making up meaningful names, though some languages can't convey the same feeling of this name.

Here are some other translations of Severus Snape:

Translated to my native Russian language, this sounds like "Snegg". It did not come from some words, but it pretty much conveys the character for native Russian speakers.

Anyway, I usually imagine characters with their original names, as the original work is the most accurate version and tells us exactly what the author wanted to tell.