Are all alchemists part of the military?

I've been watching Fullmetal Alchemist: Brotherhood lately and got to the episode where Ed and Al deliberately try to lure out Scar for their own purposes (I'm trying to be spoiler-free here).

Anyway, I noticed that the townspeople of Central City are all rather astonished that an alchemist would be kind enough to restore their broken stuff to them. The same thing happened in Liore, when Al fixed the broken radio.

It got me thinking: wouldn't alchemists be the best handymen and fixits? All they'd have to do is draw the circle runes and, well, clap their hands. I can understand having tradespeople and mechanics -- those are rather beyond alchemy -- but basic fixings would be well within the realm of an alchemist. Heck, even being a basic production house (making forks and spoons, for example) would be fairly lucrative.

So: do all alchemists end up joining the military in some capacity? If not, do we ever see alchemists engaged in trade?

No. All alchemists are not part of the military. There are notable examples including Alphonse and Teacher (Izumi Curtis) whose exposure to the Gate of Alchemy/Truth augmented their alchemical abilities. 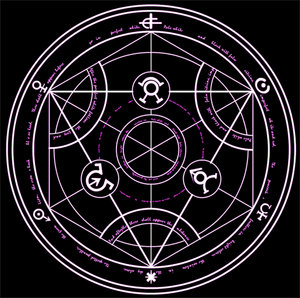 Not all alchemists are in the military - that opportunity is made available only to a select few. There are tests - both theoretical and practical - that people need to pass to become State Alchemists. Since the state seems to be practically run by the military, that means being part of the military.

The consequences of being a State Alchemist are several, the most important being that you have to orders from your supervisors and access to government libraries. Not all alchemists see active military duty, some are engaged in research, but even this research has to be of practical value to the military.

Not all alchemists are State Alchemists, Alphonso being the most obvious example. I do think we see some privately-employed alchemists, but I don't think those would be the best in the country.

Of course, alchemists don't seem to be exactly as common as mechanics, so I assume that their services would be worth much more than those of mechanics, meaning that such services would be available to a selected part of the populace and for far higher cost. And even if all an alchemist needs to do is make a circle and clap his hand, that hardly seems like an intellectually challenging job (and it seems that alchemists have in general a higher mental capacity than others). For these reasons, I doubt alchemists would be fixing stuff on a regular basic.

Not the answer you're looking for? Browse other questions tagged anime fma-brotherhood fullmetal-alchemist or ask your own question.