From reading comics, I know that Gotham City has a public library in many continuities. Batman also fights villains there a decent number of times since the library first appeared in Detective Comics #106. My question is, are there any comics where someone, hero or villain, found a book or artifact in the Gotham City Public Library that would allow someone to learn or gain superpowers? I vaguely remember a story where that might have been the case, but I couldn't find anything looking through the old comics I had.

The Mars Conspiracy is a novel in the library that explains how to build a cybernetic assassin. While not a conventional power, it is something that could be used to gain power.

The Mars Conspiracy is a novel created by Simon Sherwood, published by Gotham City: Berryman Books, 2004.

The book contained revelations about a secret plan to design and build a cybernetic assassin known as Project Mars. The author, who helped design the machines artificial intelligence, tried to use the book to expose the shadowy figures behind the project however they sent one of the assassins to destroy the book during its lunch. The author, editors and printer were killed as well as the publisher's office being blown up and the distributor's warehouse burned to the ground before Batgirl and Oracle were able to find one of the book's last copies in the Gotham City Public Library and stop the cyborg. However the last copy was destroyed when the cyborg self destructed.

As Valorum alluded to in a comment, "Bats, Books, and Crazy Crooks", in Batman '66 #18 has Bookworm seeking out an occult book.

Entitled "Bats, Books and Crazy Crooks," this Jeff Parker-written, Richard Case-drawn comic is a lot of fun. Bookworm and his beatnik henchmen muscle their way in to the Gotham Public Library at closing time in an attempt to steal its rarest book, The Cleoveritas, "a repository of occult knowledge." His plan is to force Gordon to open the display case for him, but she runs off into the stacks, in order to transform into her crimefighting alter-ego.

And apparently, the book works. 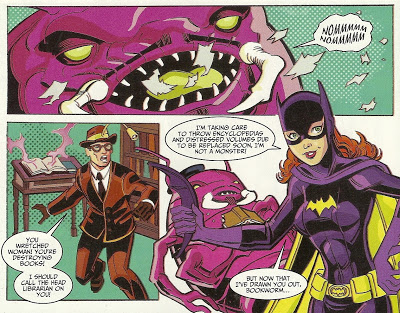 Not the answer you're looking for? Browse other questions tagged dc comics batman episode-identification superpowers or ask your own question.

51
Where is Gotham City located?
34
How does Batman have time for the amount of research he does?
6
What is the difference between Batman and the Batman of Gotham City?
26
Why is Batman restricted to Gotham city?
12
What makes Gotham work as a major city?
6
Could Batman be arrested for driving an unregistered car without a license?
3
What is Gotham City a metaphor for?
16
Looking for a Batman Comic where Batman had real wings
26
Why doesn't Gotham City execute their villains?
6
For what reason did Max Schreck want to build a capacitor in Batman Returns?