I've read a book about a guy in a post-apocalyptic world who had a chicken that later on showed herself to be some kind of an alien. Pretty weird stuff but it makes sense in the book.

I remember the cover, of course there was a chicken/hen on it but not the title. It was a very interesting sci fi novel, only read it once probably more then 10 years ago. It would be great to find it again. I believe it was written by a British or American author.

Future Eden: A Brief History of Next Time by Colin Thompson. 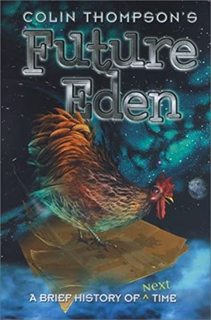 In a hilarious and scathing sci-fi adventure, it is the year 2287 and the human race is doomed until Jay and an all-powerful chicken named Ethel set off to save the world. They encounter goldfish-oracles, evil roosters, giant potatoes, blind piano tuners, Merlin, and magic spells in their heroic quest.

Found with a search for novel alien chicken telepath

8
Dystopian sci-fi book about a designer drug that takes the world by storm and gives people weird visions
10
Alien invasion with mythological undertones
7
Fantastic/sci-fi thriller - journalist investigating disparitions near a factory
12
Movie in which aliens disguise one of them as a cartoon chicken, mistakingly thinking it will help him blend on Earth
8
90s sci-fi book about humans on a alien reserve; one man escapes and returns to liberate his people
4
Book set in ancient Egypt, search for fountain of youth and a cult doing stem cell regeneration
6
Young Adult (likely Christian-ish) Sci-Fi book - young man crashes in alien planet, attacked by a pterodactyl, dwells in caves
3
Novel about a giant woman rampaging through a city, guy has to become a giant to stop her