What is the “ceramic” used in the world of “Nausicaa of the Valley of the Wind”?

In the manga and anime, there are many references to the use of "ceramic" as a material. We know that the vanished industrial civilization which preceded the rise of the toxic jungle used it widely, and it was important enough that this time was known as the Ceramic Era. In the time of Nausicaa many human settlements support themselves by mining it. So it must require a high level of technological sophistication to produce, and also be capable of being reworked.

It is hard enough to be used for armour and bladed weapons:

And light enough for the fuselage of aircraft, as we can infer here: 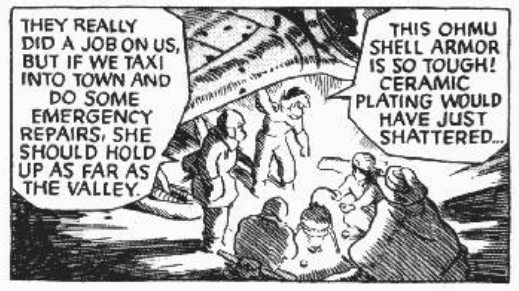 Although it is brittle, and therefore inferior in resilience to Ohmu shell.

It seems quite unlike the material today used to make bricks, dinner plates and electrical insulators. Do we have any information on the nature of ceramics in Nausicaa's world? Do comparable ceramic materials exist today?

Ceramic armour in our world has been used since the Vietnam War up until the modern day, specifically to stop blast fragments and bullets. It's only designed for projectile resistance, though, so probably wouldn't help much against a sword. It's common in use in personal body armour and armoured vehicles - for example, plates of ceramic body armour are inserted into soft armour vests, and panels of the armour are used on aircraft to protect the crew.

If the people in Nausicaa use a similar material in armour and on aircraft it would make sense, but only really to stop projectiles.

Not the answer you're looking for? Browse other questions tagged nausicaa-of-the-valley-of-the-wind or ask your own question.

3
Why did the Torumekians kill King Jhill?