Looking for YoungAdult/Romance/Fantasy series of (at least) four books, similar to the "Selection"-series - but with vampires. USA is ruled by a royal family rumored to be vampires. For most normal human people, poverty and starvation is a problem. A resistance movement is active.

When a competition is announced to help the Crown Prince find a bride, the mother of our heroine convinces her to apply. She has a kid sister - and maybe a kid brother, and an older brother in the resistance. She gets picked as representative for her district, along with another girl from the poorer side of town. This girl is disresepectful to the Queen, is attacked, and turned into a vampire.

The girls each gets servants and gets dressed up, and goes on arranged dates with the Prince. The girls are interviewed and profiled, and together with clips from their week and their dates, a TV-show is aired every week. Some girls are sent home. Our heroine and the prince hits it off. When her sister gets ill, the prince joins her on a trip home and arranges for a doctor.

Found it! It's the "Vampire Royals" series by Leigh Walker; starting with "The Pageant", followed by "The Gala" and "The Finale"... there are currently 8 books, with #9 due in May 2021. 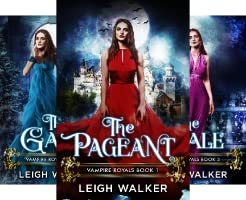 Who's the fairest of them all?

Young women from every settlement in the land are being handpicked to enter The Pageant, a contest reminiscent of Miss Universe from the old days. Gwyneth West's social-climbing mother wants her to compete, but Gwyn isn't so sure...

The Pageant is government-sponsored. If you're lucky enough to be chosen, participation is mandatory. Aggressive competition is allowed, even encouraged.

And then there's the prize... Dallas Black, otherwise known as The Dark Prince, will propose to the winner. Dallas is the son of King Black, who won the last world war and governs the new settlements.

When Gwyn is thrust into The Pageant, she fights to survive the competitive nature of the other contestants.

But even if she wins...can she survive a vampire fiancé?

Might you be thinking of the Age of Vampires series by Caroline Peckham and Susanne Valenti? It's seven books. It has the United States ruled by a family of vampires (the Belvederes). It has the female main character (Montana) competing to be with the vampire prince (Erik?) while her twin sister (Callie) seeks out the Slayers who plan to kill the vampires, including an ancient warrior known as Magmar. Several people have called it a vampire version of Selection. 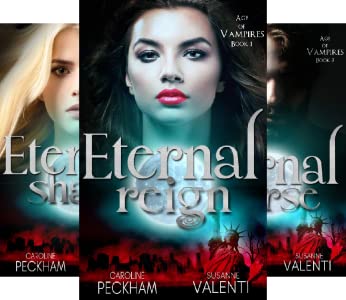 Not the answer you're looking for? Browse other questions tagged story-identification books vampire or ask your own question.

5
YA medieval fantasy written before 1976 about a girl banished from the royal court
10
Mid-90's sci-fi series with a girl who finds her brother trapped in an alien zoo
17
Book with all-girl orphanage
6
Novel involving soul of a physically challenged person possessing his brother's body
7
Book about teens with powers
7
Book series: guy becomes a vampire, creates portals to travel between different worlds to avenge the girl who turned him
3
Book (first in a series?) with a teenage witch attending a school of magic mainly with nonhumans
8
Brother/sister and two telepathic cat-like aliens crash land their spaceship in medieval Europe