He hesitated, realizing what he was about to say to the world's first human level AI would be in history books... -- which SF story is this from?

(I was directed here from r/scifi, where I asked this question, to no avail but some interest. I am posting a copy of what I posted on that subreddit.)

I am trying to dig up this novella, I believe, that I read once about 20-30 years ago.

It's about a computer scientist who is trying to build an AI, but keeps failing because the program keeps diverging into unstable states. He's also having marital problems with his wife.

A bunch of stuff goes by that I don't remember. But the final scene stuck with me. The scientist, George I think, goes with his wife to a party. George has already decided to take a very different approach on how to build the AI, and the build process is running as he is at the party.

He's wondering where his wife went. Then he sees her on the big screen TV naked, performing a sex act on a stranger. George thinks, we've been married all these years, and she never wanted to do that with me.

Then his phone rings. It's a status update. The math has converged. The AI is active. It says, "Hello George."

And the last paragraph was George thinking, whatever I say next is going into the history books.

For a long time I thought this was written by P.J. Plauger, but I could not find it. I hope someone can remember this. Thanks in advance

I am 99% certain that this is Virtual Image by P. J. Plauger.

According to ISFDB this was only published in New Voices III: The Campbell Award Nominees and that is where I must have read it: 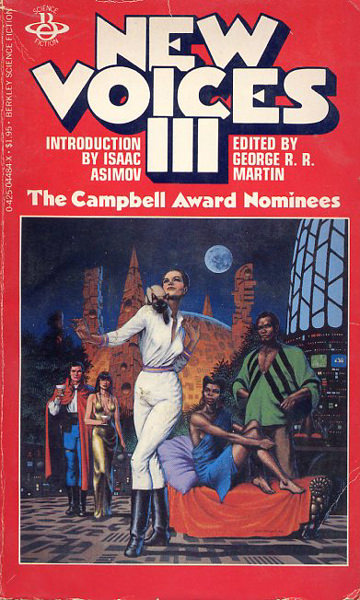 The scientist is George Brewster and his wife is Diane. I remember the party where there was a large screen. People took it in turns to go to a room where the camera was and have sex with whoever they met there. The screen showed video of this to the party goers.

However I cannot find my copy of New Voices, and a desperate Google search has failed to find any useful information on it. Google books has some information here, and there is a limited ability to search within the book that has hinted this is indeed the story without finding any conclusive proof.

I don't think the AI phones George. My recollection is that he phones the AI from a hotel and says something like "Hello this is George" and that starts a testing process that shows the AI is working.