Book: Mechsuit on a crystal planet is destroyed by native vegetation

Can someone help ID a book please. I probably read it in the 80s, but can't be sure it wasn't early 90s.

It was the story of a lone human in a mech suit who explores an alien planet where much of the life is crystal based. They smash through everything, overpowering the vegetation in the mechsuit until something unexpected, a laser defence from a plant, immobilises and destroys the suit. They jump out and have to live by their wits.

They make friends with an alien community, I can't remember if they're fully sentient. I don't recall how it ends.

The protagonist Evan Orgell is a troubleshooter for an organization trying to exploit Prism, and is sent down in their most heavily armoured suit to find out what happened to the people at their base. He finds everyone on the base dead, apparently killed by various deadly native organisms (for example, silicon-based semi-organic microorganisms that appear to have pierced suits and eaten people from within).

There is one locator beacon still active and at a large distance from the base, so he leaves to track it down. He's a bit arrogant of his technical superiority and bulls through in a straight line toward the beacon. He encounters a barrier, which appears to be a line of crystal structures; rather than trying to go around it, he blasts his way through, and is disabled in turn by a pulse of energy they channel along the line as a defensive mechanism.

Shedding his useless suit he is in short order prey for a carnivorous plant. He is freed by a small blue crystal native, who is revealed to be sentient when the native, Azure, plugs into his brain and starts talking to him.

They travel to Azure's home, the Collective, with Evan gradually learning to adapt to the environment. Azure provides him with a rudimentary suit of armour by having him lay in a pool whereupon the organisms in the pool form a coating around him (which is a defensive reaction on their part) and then Azure cuts joints in it.

Azure's Collective is a large group of different but cooperative organisms, including some who help collect sunlight, others who form walls, thinkers, gatherers, scouts like Azure, etc. Evan helps them by giving the collective the chemistry for batteries, and the idea for radio.

The collective helps him trace the signal of the last remaining member, Martine, to a deranged organism that almost kills them. They are rescued by Martine, who has had half of her body (vertically, including half her head) replaced with blue crystal, and who can produce a red laser from her artificial arm. She explains she put the beacon in the deranged organism as a trap for the person on her team who betrayed and killed the rest. (They were not killed by the native biology as it first appeared.)

Martine joins Evan in an effort to try to keep the natives from being exploited, which they succeed in doing by teaching the natives enough for them to grow a subspace transmitter which attracts the attention of the authorities in time to intercept the next (better armed) group of exploiters. The world is placed under Edict, and Martine and Evan will remain there to help them grow their first spaceships. 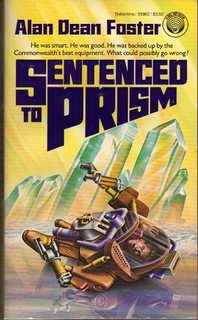 2
Book Identification with an Ice Planet
12
Native American book I want to re-find
5
Book involving people turning into crystal
3
Book based on Native American folklore; girl in Texas shapeshifts and has a crow as her spirit animal
11
Book about relativistic ship, ESP for navigation and communication, Earth destroyed
16
Book About Survival Test on Another Planet